On this page of our guide to Batman: Arkham Knight you will find exact locations of Riddler trophies (17-33) that can be obtained on Founders' Island. Trophies are one of secrets (collectibles) available in the game. 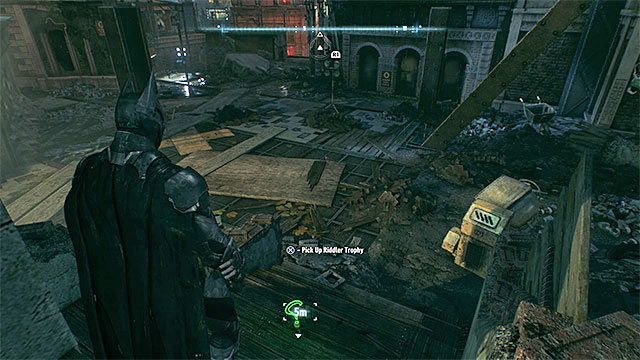 Trophy walkthrough: The trophy can be found on one of the floors of the building and you can get it without using any gadgets. 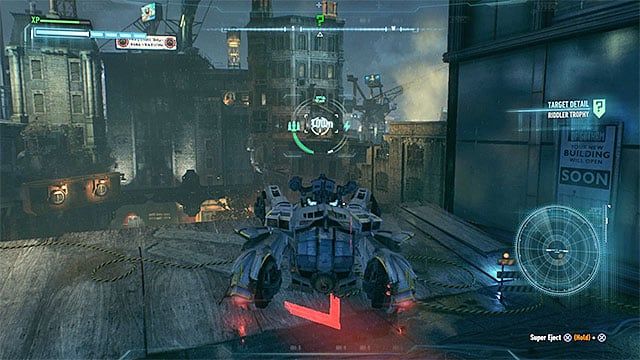 Destroy the weakened wall from distance with the use of Batmobile

Trophy walkthrough: You can reach the trophy only after you destroy one of the militia checkpoints. The secret is located inside the building, behind a weakened wall. You must park the Batmobile around one hundred meters from the wall, in a place from which it is well visible. Destroy the wall and go to the newly created hole to take the trophy. 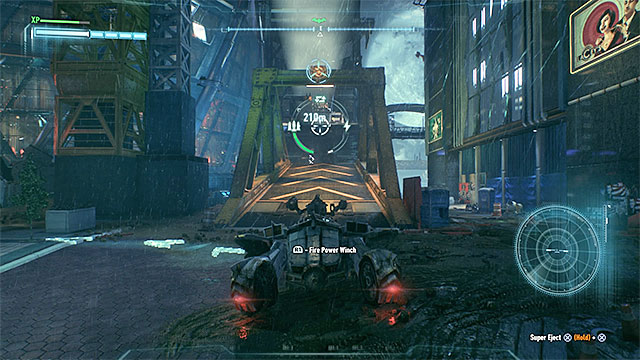 Trophy walkthrough: Find the pulsing green button on the wall of one of the buildings, drive towards it in the Batmobile and activate the forensic scanner. Remain in Batmobile's battle mode and start following the green question marks appearing due to scanners work. The question marks will lead you to a large object under construction. Drive slightly back and find the ramp shown on the picture above. Use the winch on the ramp to raise it and then perform a jump with the help of the afterburner. 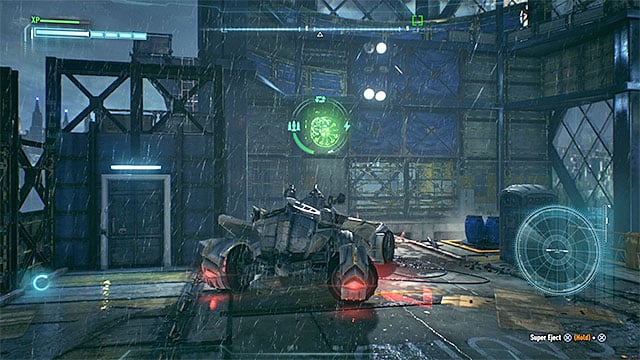 If you performed the jump correctly, you will land on one of the floors of the new building. Reactivate the scanner and reach the top. There you must find the round green sign on one of the walls and shoot it with your vehicle. All that's left is to reach the new hole and pick the trophy. 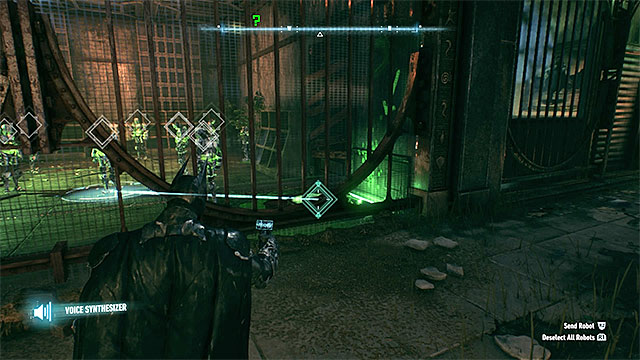 Trophy walkthrough: Examine the underground territories in order to find a room with large amounts of Riddler's robots. You must take control of one of them. If you don't have the chip that allows you to control the robots, focus on other secrets and sooner or later you will obtain it. Pick any robot and use voice synthesizer on him. Order the machine to move on the right pressure plate. 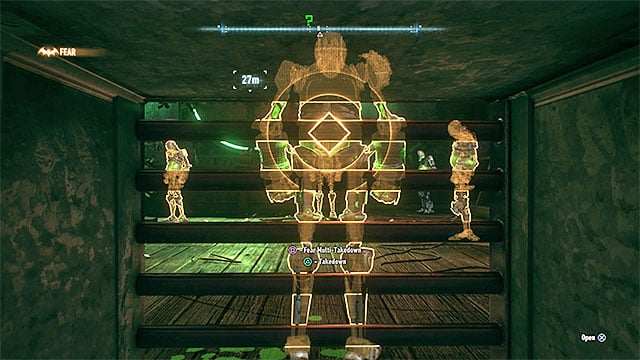 Use the ventilation shaft

Notice that the right door opened. Drive there in the Batmobile and destroy the weakened wall. Enter the building and use the ventilation shaft to reach the room with the robots. You must defeat all machines. You should start by activating the fear takedowns. Once the area is secured, use the batclaw to catch the trophy from distance. 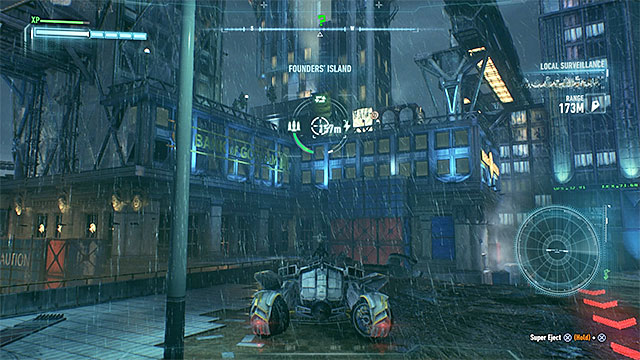 Trophy walkthrough: The trophy can be found inside the skyscraper and is protected by a weakened wall. You can't use the Batmobile to reach the platform with the hideout, but you can shoot at it from one of the lower levels. The proper place to start the shooting has been shown on the picture above. 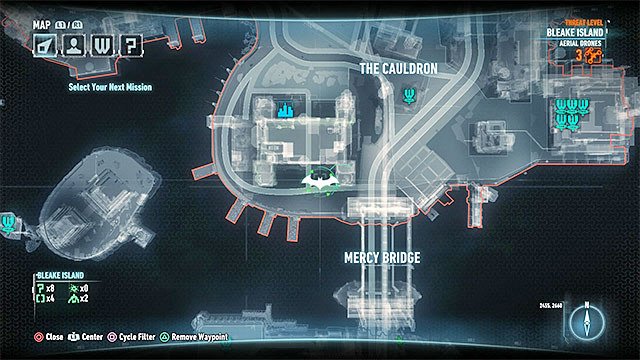 Trophy walkthrough: The trophy can be found in a closed cage on a small, highly hanged cage. Once you reach the destination, read the coordinates [2456, 2663]. Open the world map and use the coordinates (they appear in the bottom right corner of the screen) to find the place that you must investigate - it has been marked on the picture above and it is located in the southern part of GCPD lockup on Bleake Island. 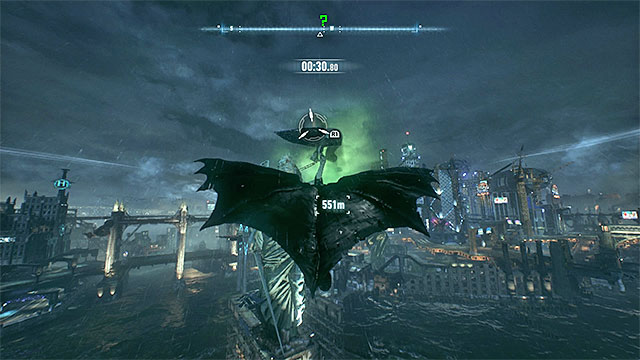 Use the hook launcher on, among other objects, the Lady of Gotham statue

Once you reach the destination, look around for a generator attached to the wall of the police department. You must load it with Batmobile's winch. A hard time trial is ahead of you - you will have only 40 seconds to get back to the cage with the secret. You MUST use the grappling hook launcher, more specifically it's most upgraded version. You can catapult Batman with greatest strength by pressing the jump key/button three times (don't release the button after the third pressing). Catapult Batman from the Batmobile and use the launcher during the flight. On the way, among other objects, pull yourself to the upper part of the Lady of Gotham statue and to one of the cranes. Make sure to land precisely, don't waste too much time on that. 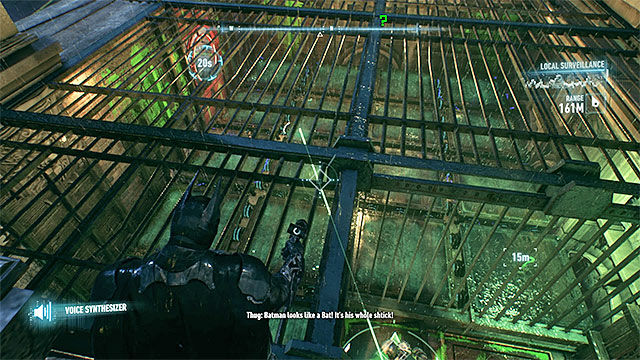 Send the robot for the trophy after hacking the defense turret

Trophy walkthrough: Land on the roof of the building and look around for a large cage with electrified floor near which Riddler's robot is standing. If it's your first encounter with the robot, then you must jump on him and perform the knockdown. You will obtain a chip that allows you to give commands to the robots. If you already have the chip, you can skip this step.

Remain on the roof from which the whole cage can be seen. During this riddle you can't be spotted by the robot (instead of following your orders he would focus on attacking you). First, use the remote hacking device and deactivate the defense turret for half a minute. After that, use the voice synthesizer and start guiding the robot through a not too complicated labyrinth. He must reach the trophy and pick it up. Hack the turret again and then order the robot to walk out of the electrified cage. Now you can attack it and take the trophy. 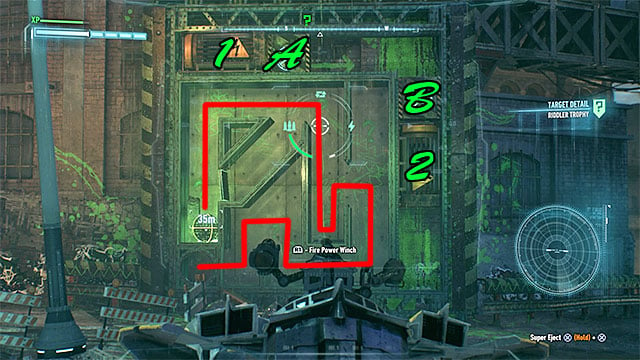 Trophy walkthrough: It's a hard riddle during which you must guide the ball with the trophy to the end of the labyrinth - the route of the ball has been marked with red color on the picture above.

Point the remote electrical charge at the generator 1 from the picture and make the ball attached to it. Quickly jump to the Batmobile and use its winch to move the hook A as far to the right as possible. If you did everything properly, the ball will land in a new place. 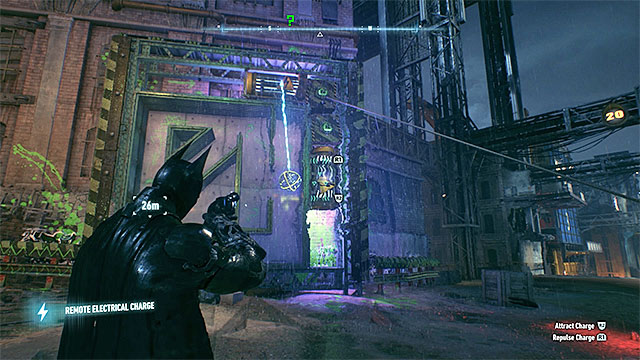 Next step is the hardest. Make sure that the hook A is moved maximally to the right and leave the Batmobile without unhooking the winch. Now use the remote electrical charge on generators 1 and 2 to attach the ball from two different sides. Your objective is to get the ball fly to the right side of the labyrinth - it has been shown on the picture above and you will probably manage to do it after few tries.

Use the winch on the hook B, move it as far down as possible and load the generator 2 with the remote electrical charge to move the ball to the left. Now move generator 1 precisely above the ball, catch it (remote electrical charge) and use the winch to move hook A to the left. Now you must wait for the ball to reach the exit and then take the reward. 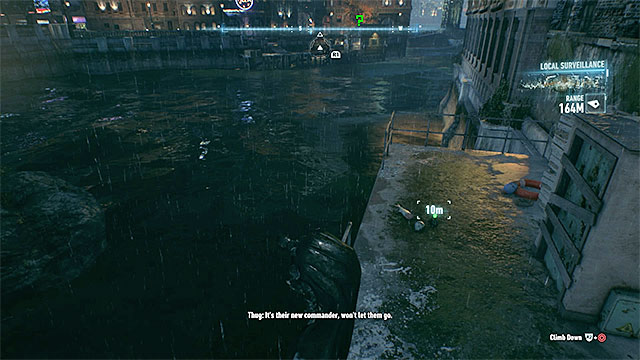 Look around for the trophy near the water

Trophy walkthrough: The trophy has been left near the water and you can take it without using any additional gadgets. 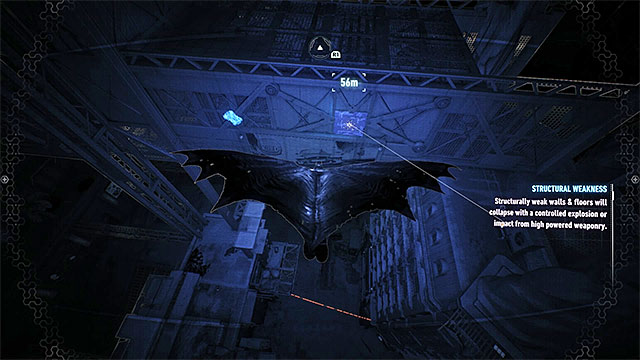 You can use detective mode to quickly find the weakened wall

Trophy walkthrough: The trophy can be found inside a large bridge and it is protected by a weakened wall. Find the wall and glide towards it to get through. 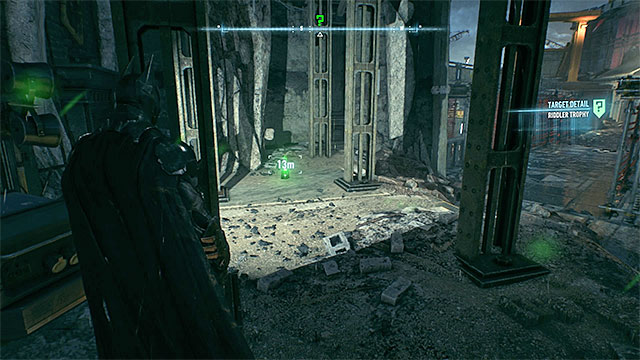 The place where you will find the trophy

Trophy walkthrough: The trophy can be found on one of the floors of the ruined building in a well visible place. You can obtain it without using any gadgets. 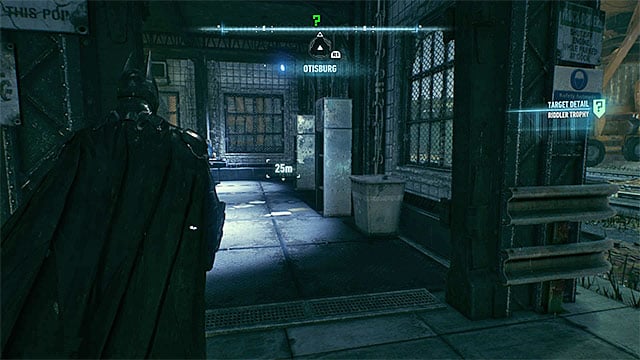 Explore the inside of the small building in the port

Trophy walkthrough: The trophy can be found inside a small building at the entrance to Adams port. 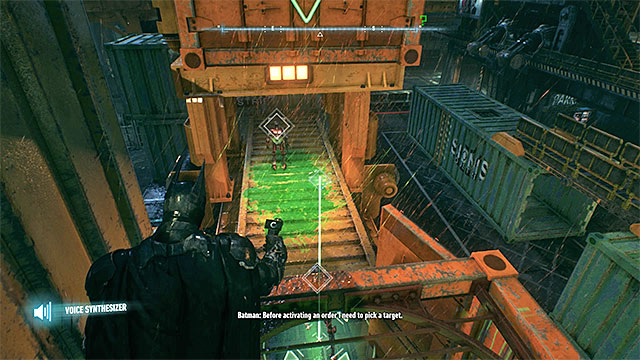 Trophy walkthrough: Reach a cage in the port in which a group of Riddler's robots can be found. If you don't have the chip required for controlling the robots, focus on other secrets and sooner or later you will obtain it. If you have it, use the voice synthesizer on the robots. Send them one after another to the nearby container while ensuring that none of them will spot Batman. After sending two-three robots, use the batarang to hit the green question mark. The robots will be crushed. Repeat the process until you eliminate all robots. Once that happens, enter the cage and take the trophy. 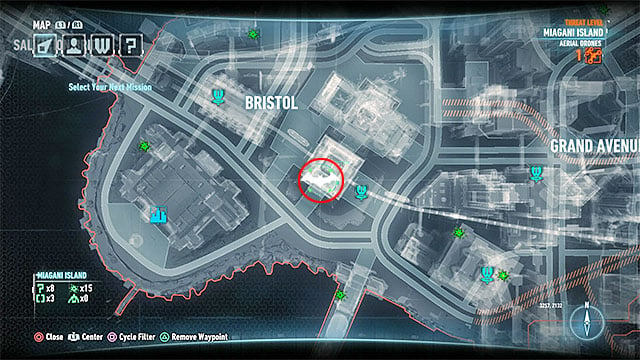 Trophy walkthrough: Find the locked cage with the trophy in the port and read the coordinates [3258, 2136]. Open the world map and use the coordinates (they are displayed in the bottom right corner of the screen) to find the place that you must explore - it has been marked on the picture above, it's a large metal construction on Miagani Island. Reach the highest floor of the construction and stand on the pressure plate. 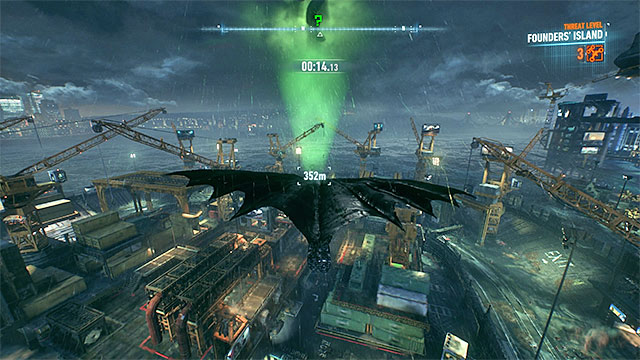 Use the grappling hook launcher on the way to catapult Batman

A hard time trial is ahead of you - you will have only 40 seconds to get back to the trophy in the port. You MUST use the grappling hook launcher, more specifically it's most upgraded version. You can catapult Batman with maximum strength by pressing the jump key/button three times (don't release the button after the third pressing). Use that method to catapult the hero on the nearby viewpoint. Use the same method two-three more times during the flight. Each time you should pick the highest roofs and antennas and avoid letting Batman to glide for two long. Prepare the batclaw for use in the final phase of the flight. Land once you notice the trophy cage and immediately use the mentioned gadget. The time limit is very inflated, so you can't waste too much time on trying to land perfectly at the collectible. 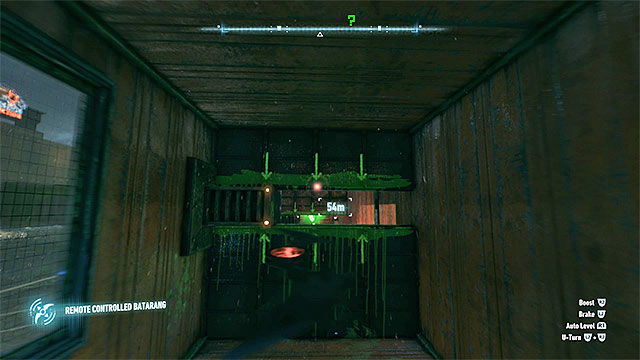 Trophy walkthrough: Find the oblong cage in which the trophy is placed. You must use Batmobile's winch here. Attach yourself to each of three hooks and pull out the metal objects. You must hurry as they will be slowly returning to their original position. Once you finish using the winch, jump out of the car and use the remote controlled batarang. Aim the gadget at the small right hole and fly through the holes to finally hit the green question mark. Now you can use the newly unlocked entrance to the container and take the secret. 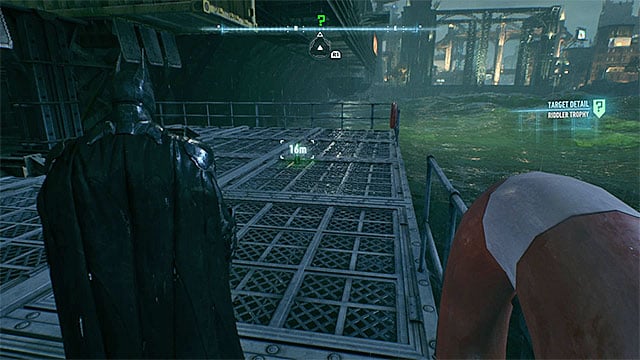 Examine the platform at the water

Trophy walkthrough: The trophy can be found on the large metal platform at the water. You can take it without using any additional gadgets. 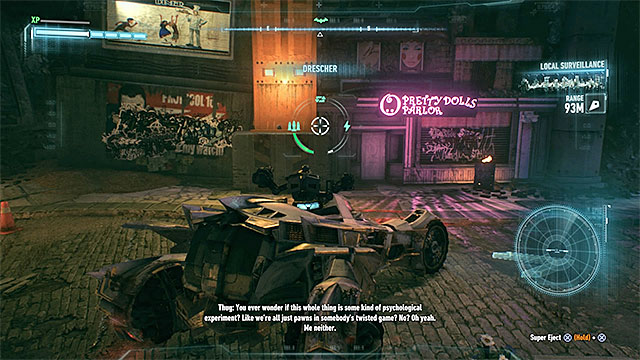 Trophy walkthrough: The trophy is in Pretty Dolls Parlor in the central part of the Founders' Island. The entrance to the parlor has been shown in the above screenshot and it becomes available only after you have completed The Perfect Crime side mission . 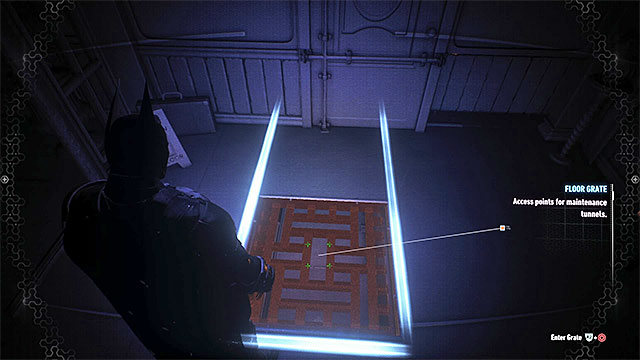 Get through the shaft and destroy the weakened wall

In one of the corridors at the beginning, find the venting shaft embedded into the flooring. Take it and get into a side room. Here, spray the explosive gel over the weakened wall and enter the room with the trophy in it.