On this page of our guide to Batman: Arkham Knight you will find exact locations of Riddler trophies (20-38) that can be obtained on Miagani Island. Trophies are one of secrets (collectibles) available in the game. 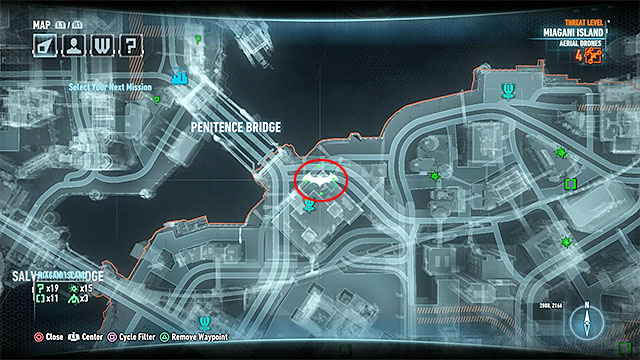 Trophy walkthrough: The trophy is hidden in a small closed cage on the roof of the building. Once you reach the destination, read the coordinates [2887, 2171]. Open the world map and use the coordinates (they appear in the lower right corner of the screen) to find the place that you must explore - it has been marked on the picture above, it's in Elliot Memorial hospital that is located in the northwestern part of Miagani Island. 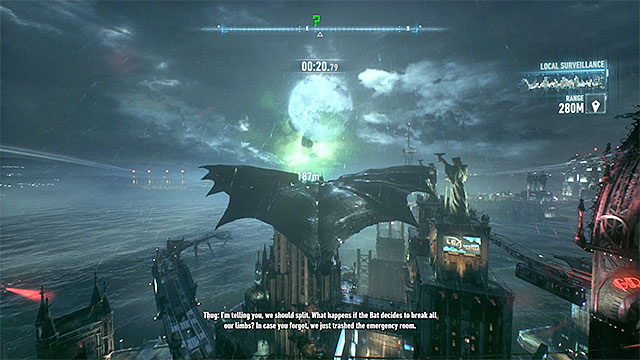 Once you reach the destination, position Batman on the green pressure plate and wait for the time trial to start. It's quite requiring - you will have only 40 seconds to get back to the cage with the trophy. You MUST use the grappling hook launcher here, more specifically it's most upgraded version. You can catapult Batman with the highest strength by pressing the jump key/button three times (release the button after pressing it for the third time). Shoot the hero in such way from the hospital's roof. During the rest of the flight use the launcher in similar way around two more times. Each time you should pick the highest roofs and antennas to avoid getting close to the lower buildings. If you complete everything according to the plan, you will reach the open cage while still having more than ten seconds of time. 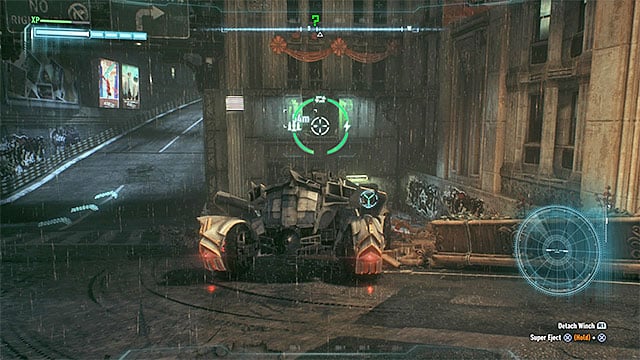 Use the winch to destroy the weakened wall

Trophy walkthrough: The trophy is inside the building and you must use Batmobile to obtain access to it. First, use the winch and pull out a large block from the wall. Then, destroy the weakened upper wall and get there as Batman. Use the grappling hook to pull yourself to the upper room. Once you take the secret, Riddler's robots will appear at the exit. You won't be able to eliminate them in regular way as the machines will have firearms. Instead, use the Batmobile remote control and release the hook. The containers will fall on the robots. Finally, use the winch again to unlock the exit. 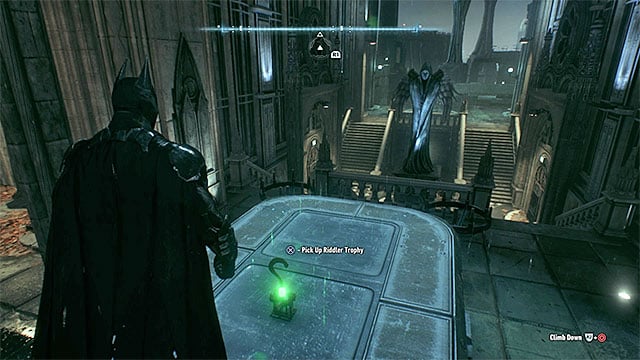 Secret is located in a well visible place

Trophy walkthrough: The trophy is lying on a sarcophagus and you can take it without the need of using any gadgets. 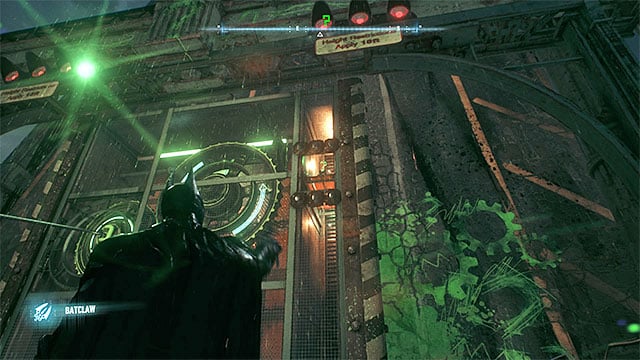 Once the trophy is in an uncovered place, use the batclaw

Trophy walkthrough: Reach the destination in Batmobile and use the winch on the construction. Make the whole mechanism move and quickly jump out of the vehicle. Focus on the platform with the trophy that will slowly rise. You must use the batclaw when the trophy will be temporary in the uncovered place. 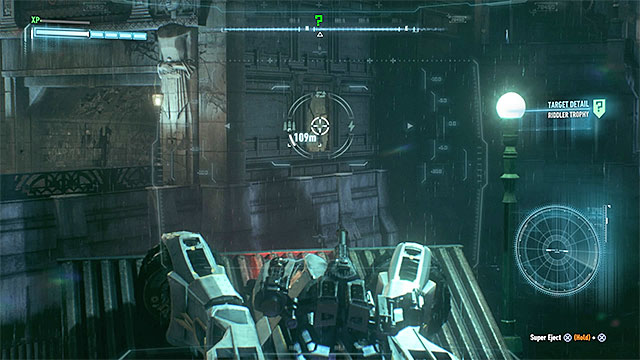 Position yourself near the water, in the place from which the weakened wall is visible

Trophy walkthrough: The trophy is located inside the building near the water. Access to it is guarded by a weakened wall. Position yourself in the Batmobile in such a place (for example, near the ramp) so that you would see the wall. Now all that remains is to destroy it and glide towards the hideout with the secret. 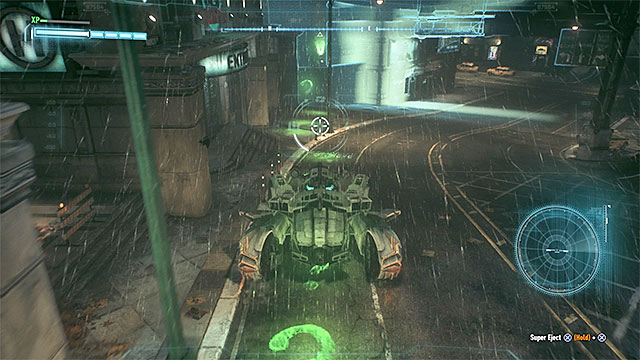 The question marks will appear due to using the forensic scanner

Trophy walkthrough: Find the glowing green button on the wall of one of the buildings, ride towards it in the Batmobile and activate the forensic scanner. Remain in combat mode of the vehicle and start following the green question marks appearing due to the scanner's work. Don't leave the combat mode even when you will have to use the right ramp to reach the upper bridge and continue the search. 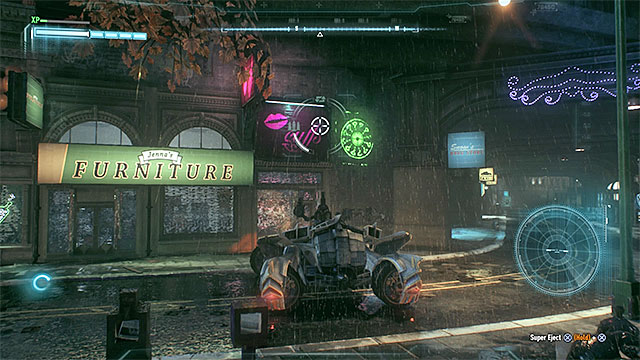 The question marks will lead you to the building on the right from Jenna's Furniture shop on which a unique round sign will appear. Use the Batmobile's weaponry there, destroying the weakened wall fragment. Now you can get there and take the trophy. 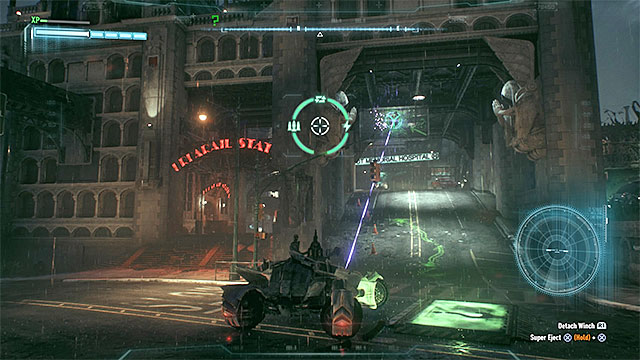 Trophy walkthrough: There's a rather complicated puzzle to solve here. First you must use Batmobile's winch on the upper hook shown on the picture above - it can be found on the other side of the street from the building with the green question marks. Hooking to the generator will load Batmobile's weapons. 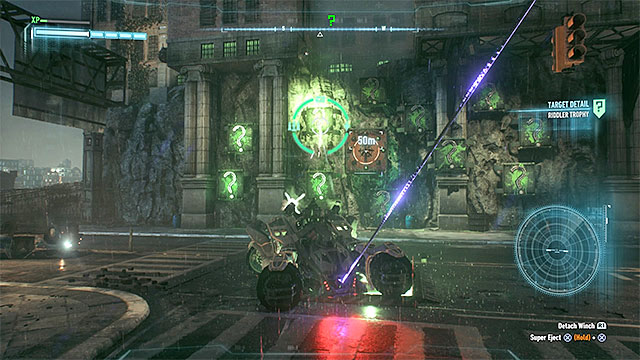 Don't unplug yourself from the generator. Instead, move the Batmobile to the large pressure plate. Now, start using Batmobile's weaponry (any cannon you want) to hit the lighted up question marks. After completing the first sequence, groups of four question marks will light up twice. Each time you must hit them fast enough , otherwise you will have to repeat the riddle from the start. 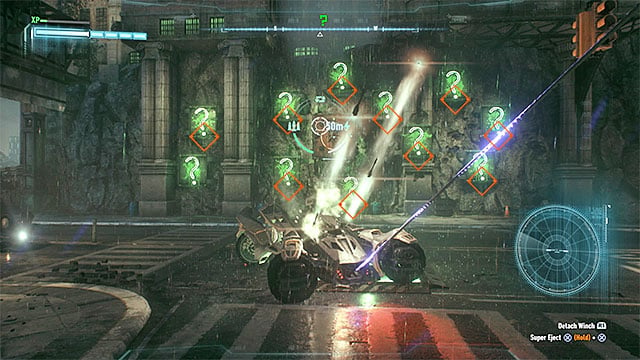 Finally, all the green question marks will light up. Now use the suppressive fire to hit most of the buttons with a series of rockets. At least one of the buttons will remain active - find it quickly and shoot with the standard weapon. If you managed to hit all the question marks, the cage with the trophy will open and you will be able to take it with the batclaw. 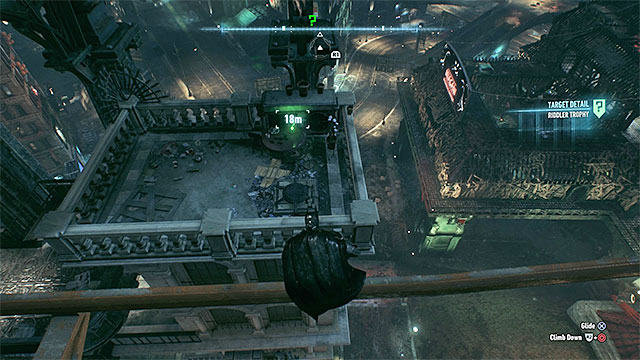 Trophy walkthrough: The trophy can be found on the top of one of the towers near the rail station. You can take it without the need of using any gadgets. 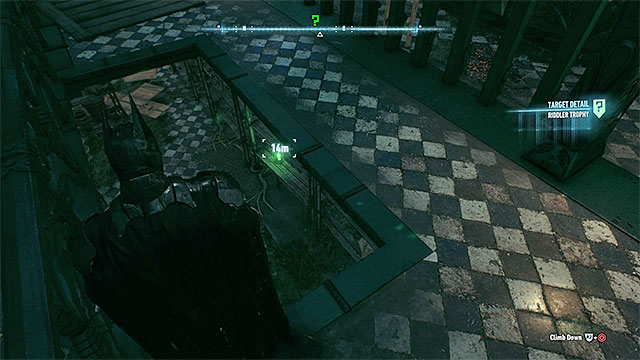 Finding the trophy won't be hard

Trophy walkthrough: The trophy is on one of the lower floors in the botanical gardens. You can get to the gardens by gliding and thus avoiding Poison Ivy's plants. 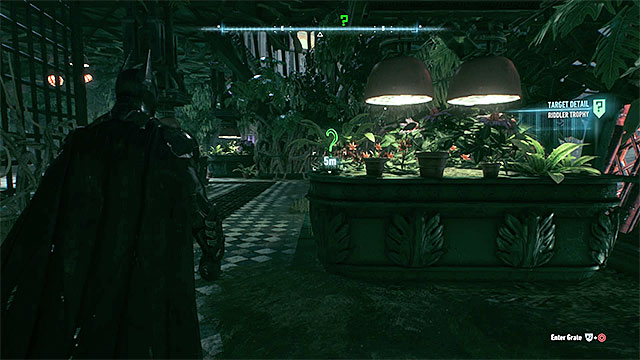 Trophy walkthrough: The trophy is in the greenhouse in the southern part of the botanical gardens. You must only find the door that leads to the room with the secret. 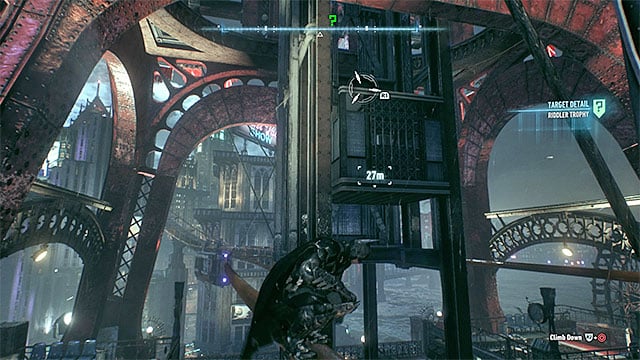 Trophy walkthrough: The trophy is located inside a small elevator shown on the picture above. Get to the roof of the elevator with the grappling hook, jump inside through the small hole and take the secret. 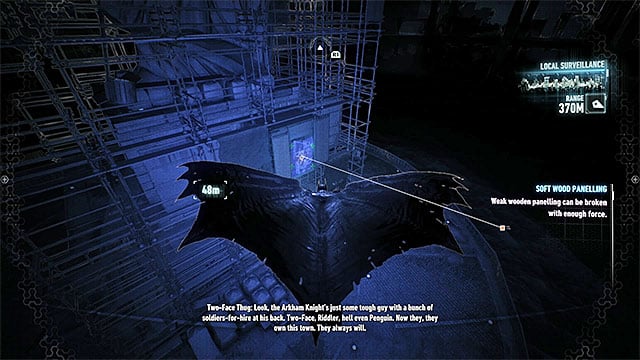 Trophy walkthrough: The trophy can be found on the small island with the Lady of Gotham statue. Use detective mode to find the weakened wall at the base of the large statue. Glide towards it and break through the wall to reach the trophy. 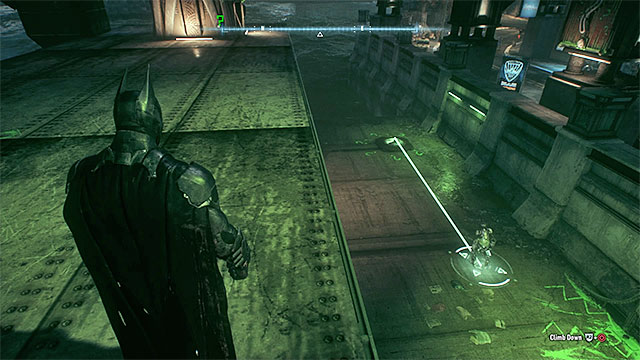 Send the robot towards the lower pressure plate

Trophy walkthrough: The trophy can be found in a locked cage near which you will find Riddler's robot. If it's the first time you face the robot, you must sneak up on him and perform the takedown. By doing so you will obtain a chip that allows you to give commands to the robots (additionally, after that you will have to use the batarang on the middle question mark to respawn the robot). If you already have the chip, you can skip this step.

Position yourself on the upper ledge and make sure that the robot won't see you. Pick voice synthesizer from the inventory and send the robot towards the lower pressure plate. 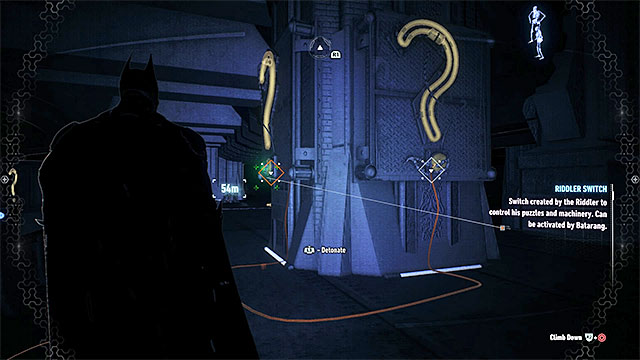 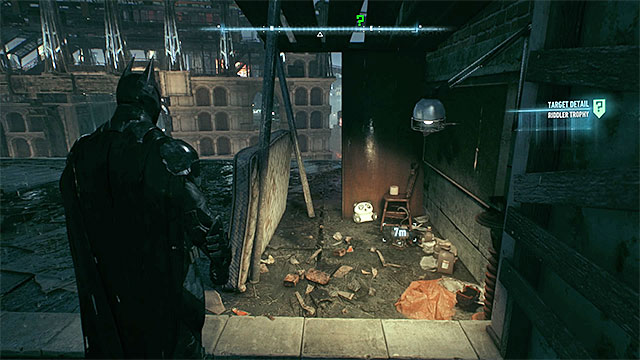 Check the roof of the orphanage

Trophy walkthrough: The trophy can be found on the roof of the Pinkney's orphanage. It is hidden behind a mattress and you can collect it without using any gadgets. 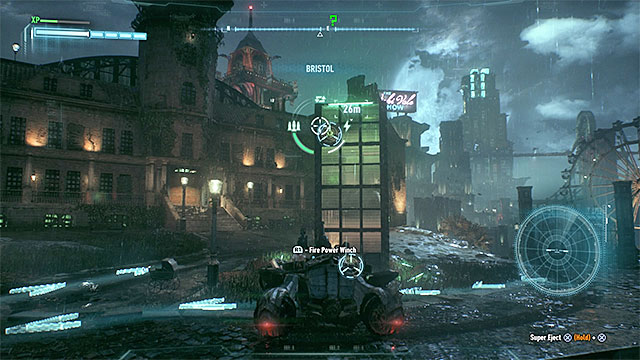 Start with catching the upper hook

Trophy walkthrough: The trophy can be found inside a ball located in a small tower. Your job is to guide the ball to the bottom of the construction. In order to complete this riddle you must use Batmobile's winch and remote electrical charge alternately. Start with using the winch on the highest hook and pulling out the metal object. 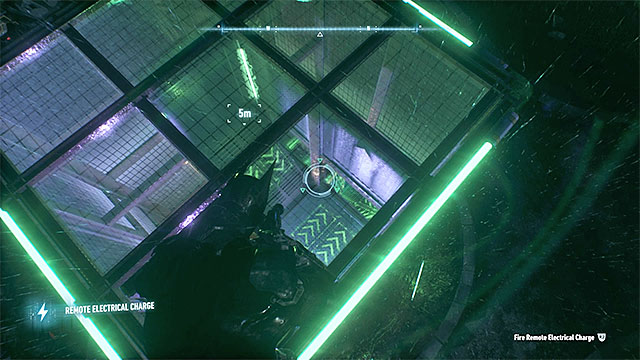 Leave the Batmobile for a while, find the highest generator and use remote electrical charge on it. This should push the ball to the middle part of the tower. Now you must repeat all the steps - use the winch on the middle hook and after pulling it out use the remote electrical charge on the middle generator. The ball should fall to the lower part of the tower and land in the container. Now you must pull out the lower metal object with the winch. Inside you will find the ball - pull the trophy from it. 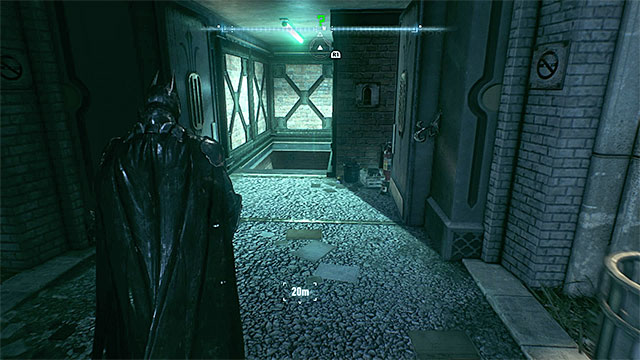 Trophy walkthrough: The trophy can be found in one of the middle floors of Wayne Tower. Examine the skyscraper to find the entrance to the building shown on the picture above. 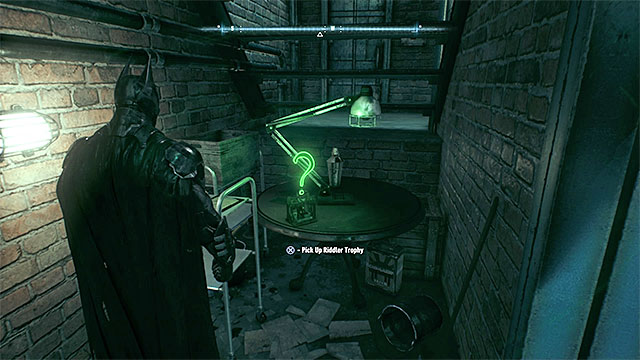 The trophy can be found under the stairs

Once you get inside the tower, follow the corridors and turn right the first moment you have the chance to. There you will find the trophy hidden under the stairs. 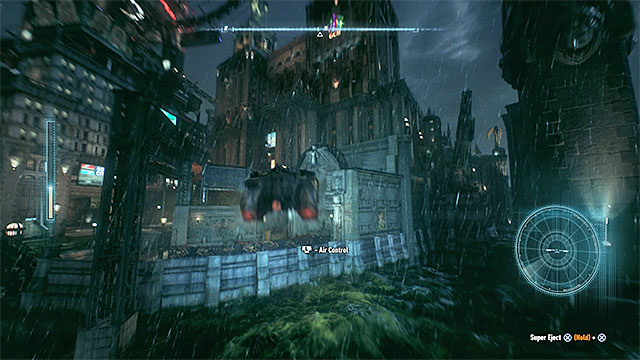 Trophy walkthrough: Find the glowing green button on Wayne Tower wall, drive towards it and activate the forensic scanner. Remain in battle mode and start following the green question marks appearing due to the work of the scanner. They will lead you to a jump. Accelerate and use the afterburner to jump above the water. 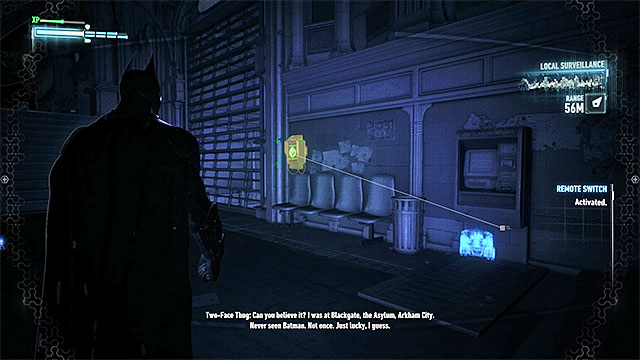 The panel that you must hack

After landing, activate the scanner again and resume following the question marks. This time they will lead you to a small blocked passage on Grand Central station. Leave the Batmobile and walk around the building from the left side. Once you reach the station, find the control panel and hack into it with the remote hacking device. You will unlock the road for the Batmobile. 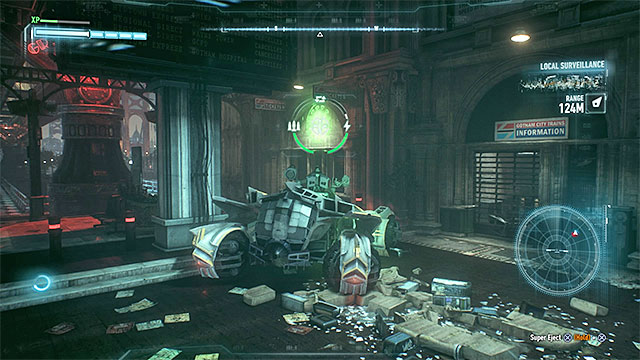 Find the round green sign and use 60mm cannon on it

It's almost the end of the ride. Find new question marks until a green round sign will appear on one of the walls. You must shoot at it with Batmobile's weaponry and thus destroy a fragment of the wall. Use the newly unlocked passage to reach a small room with the trophy. 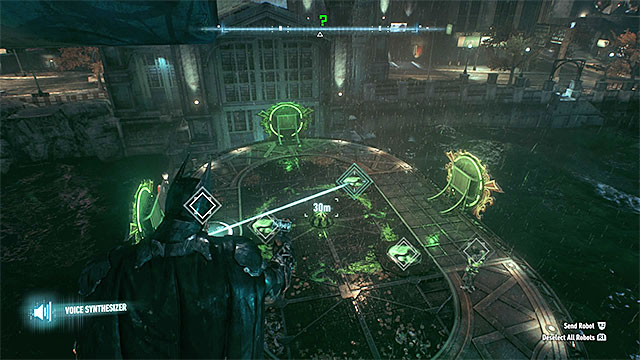 Trophy walkthrough: Investigate the pier in order to find two Riddler's robots and don't let them see you as they would attack you (additionally, one of the machines has firearms). If it's your first encounter with the robots, then you must sneak up on one of them and perform a takedown. By doing so you will obtain a chip that will allow you to give orders to the robots. If you already have the chip, you can skip this step.

Position yourself on any higher ledge and start using the voice synthesizer on the robots. Each of them must be positioned on separate pressure plate. As Batman, stand on the third pressure plate. Now you can catch the trophy with the batclaw.

Important! While solving this riddle, you can face a game bug due to which the robots will start to "clone". In such case you can send all three machines to pressure plates and get the trophy from longer distance. 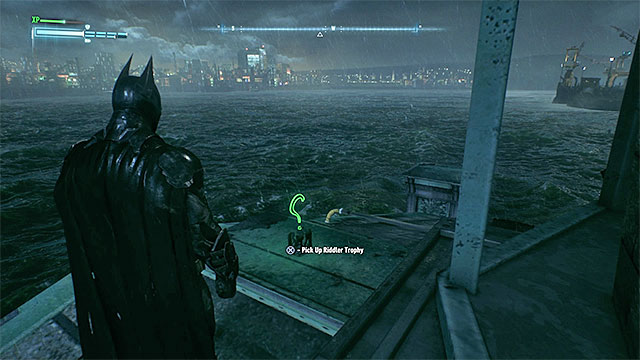 Reach the end of the pier

Trophy walkthrough: The trophy can be found at the end of the pier and can be obtained without using any gadgets.