In the Batman: Arkham Knight game there are two additional endings. The access to them is available only after you have completed the main plot, that is after completing all of the activities described on the Epilogue - Joker page. 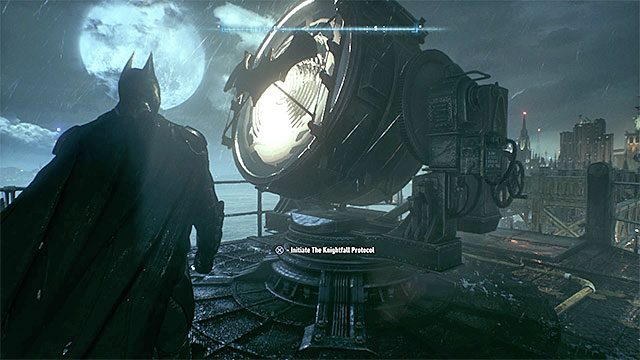 In order to get the possibility to see the first additional ending you need to complete seven, randomly chosen, secondary missions, which are connected with The Most Wanted. The description of the requirements is a little misleading in this case. You do not need to put seven known villains (ex. Penguin or Two-Face) behind the bars, because not all of the optional missions end with duels with characters like that. What matters is that all of the seven, randomly chosen, secondary missions are completed in 100% (you can check the progress in the mission window).

After you've completed all of the requirements needed to unlock the ending you need to get to the roof of the Gotham police station, which is located on the Miagani Island. You need to get to the floodlight and press the interaction button. It will lead to screening of the short movie. After seeing it you will be able to continue the game with unlocking the second additional ending among the other actions.

The second additional ending has higher requirements than the first one described above. Therefore, you will unlock it a little bit later. In order to get the possibility to see the second additional ending you will have to complete ALL of the secondary missions connected with The Most Wanted. With the Riddler's Revenge optional mission among others. This mission can be completed in 100% only after you solved all 243 riddles and beating up Riddler in a direct fight.

Just like in the case of the first additional ending, after meeting all of the requirements you need to get to the floodlight on the roof of the Gotham police station. Interacting with it leads to screening the ending.