On this page of our game guide to Batman: Arkham Knight we have prepared a description of The Line of Duty side quest. This is a rescue mission in which you first help the "ordinary" firefighters and then Chief Underhill.

The mission unlocks very early in the game. During your first visit in GCPD lockup Batman will meet with officer Cash and will learn about missing firemen from the fire station number 17 from him. They must be found and, if they are in danger, helped. 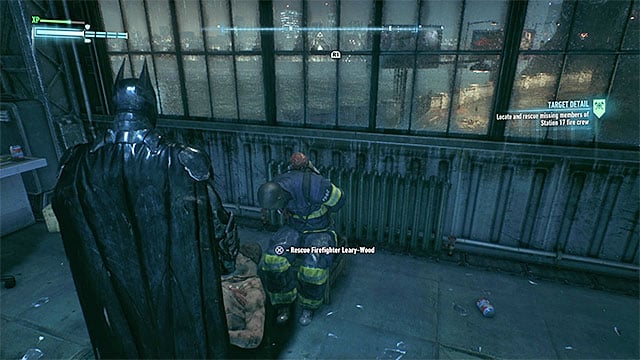 The mission consists of two parts. First you will have to save fifteen firemen - six of them can be found on Bleake Island, five on Founders' Island and four on Miagani Island. Then you will have to find and free the fire chief. The game will help you in finding 1-2 firemen but you must find the rest on your own. You can use the detective mode while traveling through the city and look around for larger bandit groups or (a better idea) use the maps shown below.

Each time, you must take care of all the bandits bullying the imprisoned firemen. Once you secure the territory, you can free the hostage. Depending on the situation, you should take enemies out from hiding or participate in direct combat. No matter the circumstances, you won't be able to use the Batmobile. More detailed information about finding and saving specific firemen can be found further in the description of this mission.

Firemen to save on Bleake Island 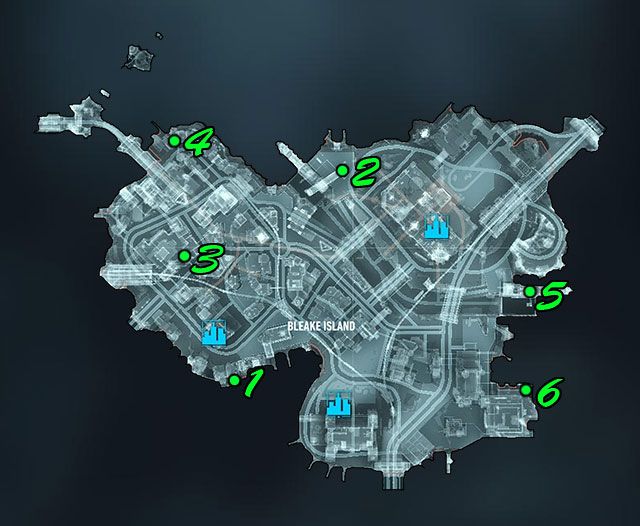 Point 1: Fireman Cannon - You must take care of a group of bandits standing at the back of the building at the water. Before you start the battle, try to use the jammer to sabotage the guns and (if it's possible) the taser used by three of your enemies. Once the battle starts, watch out especially for enemies with tasers and for enemies with shields who must be stunned with the cape and stomped.

Point 2: Fireman Leary-Wood - Five bandits with firearms can be found near the imprisoned fireman. First, eliminate the two enemies patrolling the zone. Then, land on the roof of the building with the hostage and get inside through the glass ceiling. Activating fear takedowns will let you easily eliminate the three remaining thugs.

Point 3: Fireman Ashley - Similarly to previous battles, before you decide to attack them, use the jammer on the bandits with guns. Additionally, watch out for the enemies with knives, hold the counter button/key when they start to attack.

Point 4: Fireman Adamson - The fireman is guarded by six bandits. Defeating them shouldn't be hard as there are no elite enemies among them.

Point 5: Fireman Wyatt - You must secure the pier. You will face six enemies with guns there. Stealth approach is recommended, it will make it much easier to complete this phase. Start with the bandits patrolling the pier and, once you deal with them, focus on enemies standing near the hostage. You can take care of them by, for example, jumping through the shaft and activating the fear takedowns or by spraying and detonating the explosive gel on the nearby weakened wall.

Point 6: Fireman Norman - You must neutralize the group of bandits standing near the water. As always, use the jammer on the enemy with firearms. Once the regular battle starts, watch out for the strong opponent, you must use beat down on him. Also, watch out for thugs with shields, you must stomp them.

Firemen to save on Founders' Island 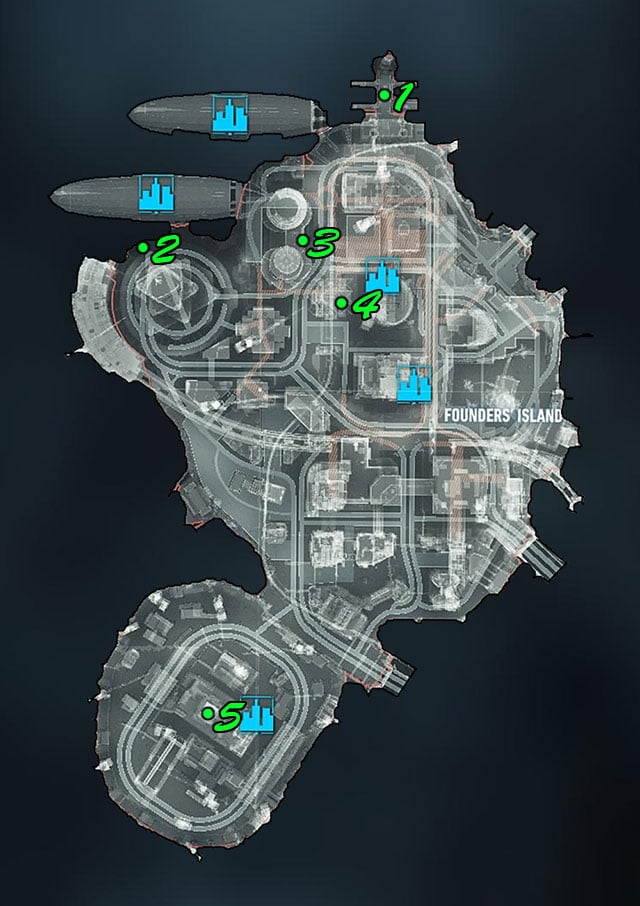 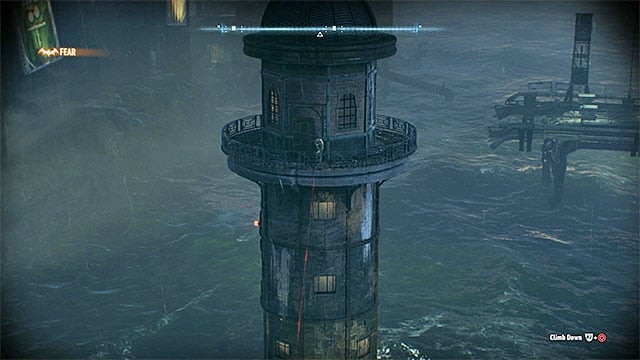 Point 1: Fireman Scott - The location is well guarded by bandits, so you must be very careful. Start with eliminating the sniper shown on the picture above, he can be found at the lighthouse (fly towards it from other side and attack him from the back). Additionally, try to find the enemy that blocks detective mode quickly, otherwise you will have to watch yourself much more when finding and surprising the enemies. There are seven enemies to eliminate there.

Point 2: Fireman Bliss - Ten enemies can be found there. Once the battle starts, try to stop the thugs from reaching the ammunition boxes, otherwise they might prove to be troublesome. Also, remember about using the beat down on stronger opponents. 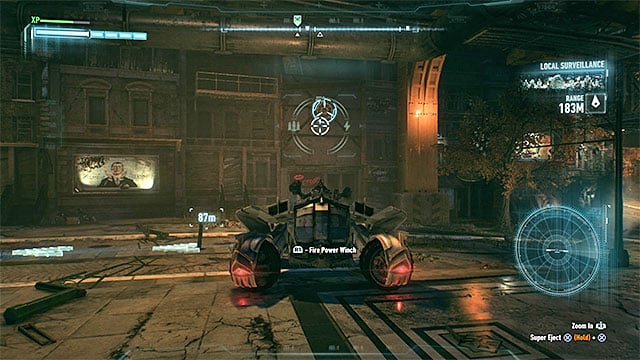 Point 3: Fireman Lozar - Reaching the imprisoned fireman isn't easy as the bandits are located inside the building. Explore the territory East from the marker on the map - you must find the interactive hatch shown on the picture above and use the Batmobile's winch on it. Pull out a fragment of the wall and then go to the newly unlocked door. 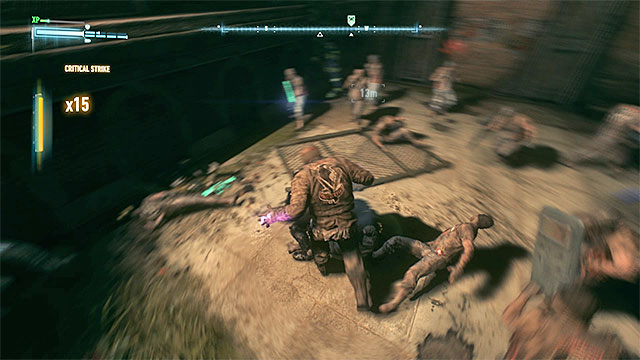 It's not the end of the trouble as defeating the enemies will be very hard. Before the battle starts, try to sabotage the weapons of some thugs and the separate ammunition box. Once the fight begins, be especially cautious of the electrified larger thugs - one of them has been shown on the picture above. To defeat those opponents, first you must use the EMP on them. Then, after removing the electricity (temporarily!) stun them with the cape and use the beat down (try to eliminate each such opponent in one long sequence of attacks). In the meantime, watch out for other opponents, especially for bandits with shields and for enemies throwing objects from their surrounding.

Point 4: Fireman Wilson - This location is occupied by a strong group of bandits. Similarly to previous skirmishes, first use the jammer on weapons and ammunition box. During the battle, watch out for three larger thugs.

Point 5: Fireman Taylor - There are eight armored bandits in the port. It is recommended to act from hiding. First eliminate the opponents patrolling the port. Then reach the roof of the building with the hostage. Jump to the room and activate the fear takedowns.

Firemen to save on Miagani Island 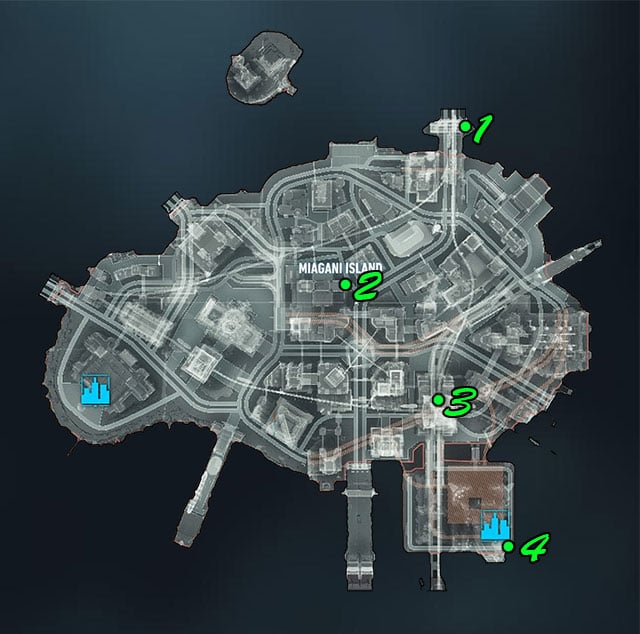 Point 1: Fireman Green - A group of armored bandits can be found around the fireman. Sabotage the weapons of some of them with the jammer and then attack them from above. Quickly jump towards the enemies and don't let them use the firearms.

Point 2: Fireman Hill - Nine bandits can be found near the imprisoned fireman, but you must watch out only for the one that has a gun. If you want to, you can start the battle with the fear takedown - it will make it easier for you to win. 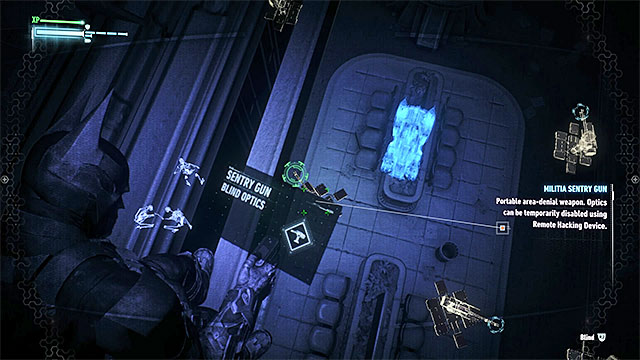 Point 3: Fireman Richardson - You must be careful as many defense turrets can be found nearby. Since the attack ranges of most of them overlap, you must plan your attack thoroughly. Get above the turret shown on the picture above. This turret is observing three bandits and the hostage. Hack it with the remote hacking tool and after that jump down to participate in the battles. During the new battle, try to remain close to the hacked turret to avoid finding yourself in the range of other devices. Before you free the fireman, don't forget to destroy the turret (you can leave the other ones).

Point 4: Fireman Daniell - The captive fireman is surrounded by a large group of bandits. Sadly, most of them have firearms. Try to use the jammer to block the weapons of at least some of your opponents and then perform a surprise attack. Try to effectively jump between targets so that you won't need to use the smoke bombs or run away from the battlefield. 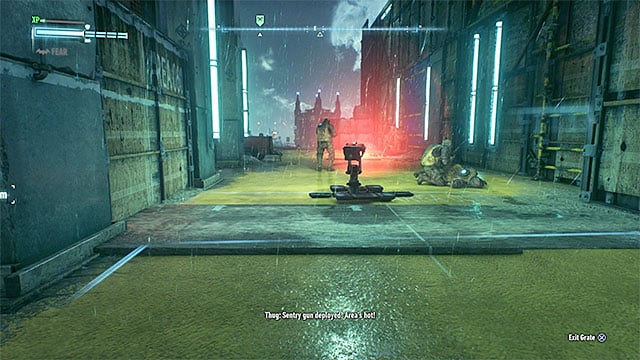 Enemies can place turrets or mines and use grenades

You will learn about the whereabouts of the imprisoned fire chief from the last fireman. You must go to the CityVision building located in the northern part of Founders' Island. Once you reach the destination, use detective mode from safe distance. You will learn that there are sixteen armed bandits there.

Stealth approach is recommended here - use the detective mode to find single enemies, sneak up on them from the back and perform silent takedowns. If possible, avoid any "invasive" methods (such as fear takedowns or explosive gel) - alarmed enemies will place mines and defense turrets. Additionally, enemies will start throwing grenades to the ventilation shafts. 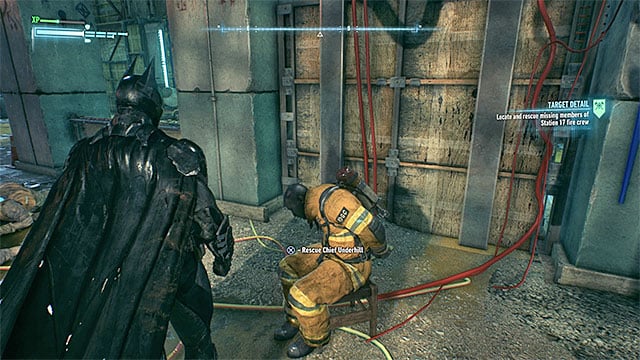 Get to the chief after you secure the territory

Keep eliminating enemies until only larger groups remain. Only then you should switch to more aggressive methods of operation. Once the area is secure, find the imprisoned chief Underhill. During the conversation with him Batman will determine that he is responsible for the arsons. Because of that, final action of the mission is driving Underhill to GCPD lockup.