On this page of our game guide to Batman: Arkham Knight we have prepared a description of Armored and Dangerous side quest. Use your Batmobile to destroy armored enemy vehicles.

This task unlocks early in the game. After completing the Interrogate the driver of the military vehicle main mission and installing a new upgrade in the Batmobile, Alfred should contact Batman. He will inform you that Arkham Knight has mobilized his followers and that you should destroy the armored vehicles that they are using. From now on you can find and eliminate APC vehicles. 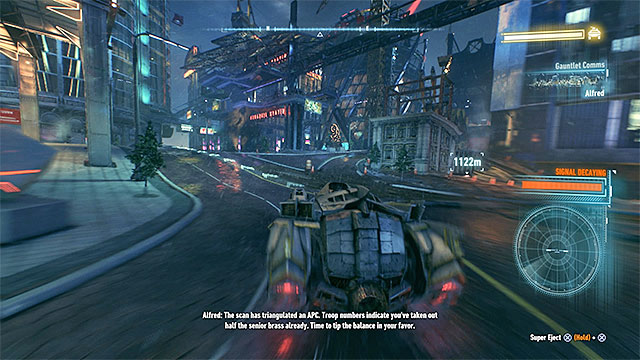 There are nine APC vehicles to destroy - three in each main island of the city. The machines aren't located in one specific part of the map, they are constantly moving around it. Luckily, you don't have to find them on your own, each time when you activate this side mission (select it from the mission list) Alfred will inform Batman about the location of a new armored vehicle. You must try to get close to it before the signal will be lost, otherwise you will have to start the locating process all over again. Because of that, you shouldn't participate in any unnecessary battles during the chase. You can also use the afterburner to reach the destination faster. 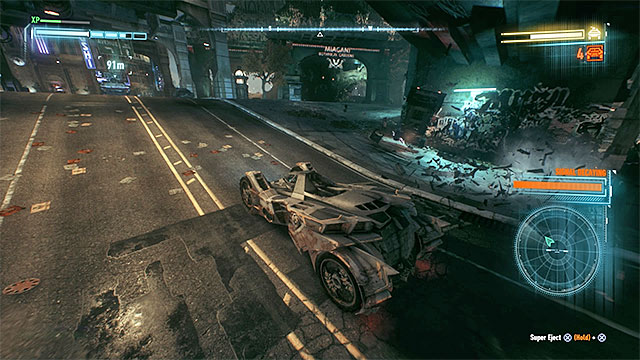 Once you get close to the marked APC vehicle, it will start running away. Additionally, the driver will call smaller vehicles to help him. At first the backup will be small, but as you progress in this mission the numbers of enemy forces will gradually increase. In the final phase of the mission it will be even 7-8 additional machines. Destroying the reinforcements isn't mandatory, but you shouldn't ignore that step as they make it much harder to get the target.

To destroy the backup vehicles you can use the standard drone hacker, but two other methods are very effective. Side swipes are especially useful if you activate it when the enemy machine is driving parallel to Batmobile. A single proper attack can lead even to destroying enemy forces vehicle. Additionally, consider using the electromagnetic explosion which can stop a whole group of vehicles at once. 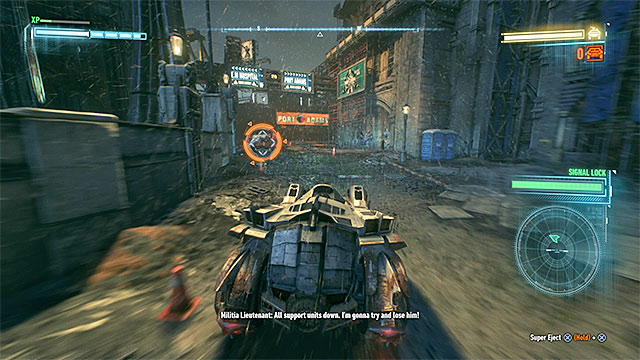 Use the drone hacker on the chased armored vehicle

Attack the armored vehicle once you get rid of his allies. The best weapon against it is the drone hacker - each hit will deplete the energy bar shown in the upper right corner of the screen. In the meantime, dodge with the use of Batmobile's engines to avoid enemy machine's attacks.

The methods described above must be used on all nine vehicles. What's important, after destroying a vehicle you must ride far away from its wreck and wait for few moments. Only after that the mission becomes active again and you will be able to pick it from the task list so Alfred will tell you where you can find the next APC vehicle.