On this page of our game guide to Batman: Arkham Knight we have prepared a description of The Perfect Crime side quest. It is a long mission, which initially assumes the analysis of subsequent corpses in detective mode. In the final part of the task you have to visit Professor Pyg's saloon and defeat him.

The mission unlocks early in the game. During your first visit in GCPD lockup Batman meets with officer Cash and learns from him about hanging corpses that were recently found. The officer tells you that they should be examined more thoroughly and that you should capture the killer. 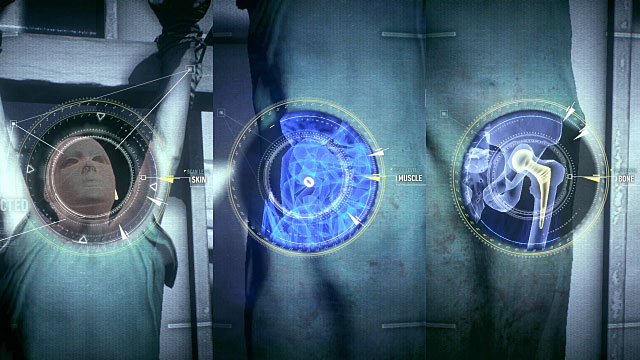 Go towards the Merchant Bridge that can be found in the north-eastern part of Bleake Island. Once you reach the destination, walk towards the mutilated corpse and start examining it. The scanner that is a part of Batman's equipment has three working modes - it can be used for checking the skin, muscles and bones. In each case you must find one interactive section, they have been shown on the pictures above:

Finding and examining the second body

You must find other murdered people on your own, they won't appear on the world map. You can try to find them on your own by listening to the classic music and trying to find its source, but it will be much easier to use the clues shown below. 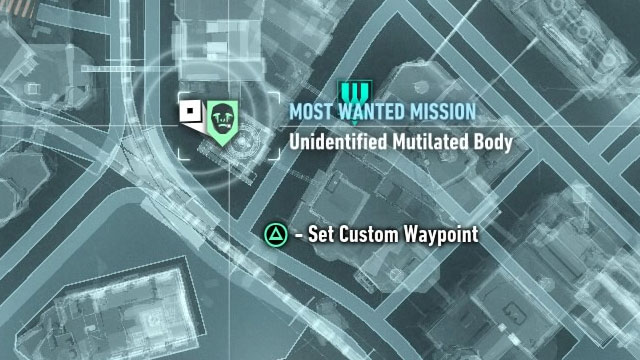 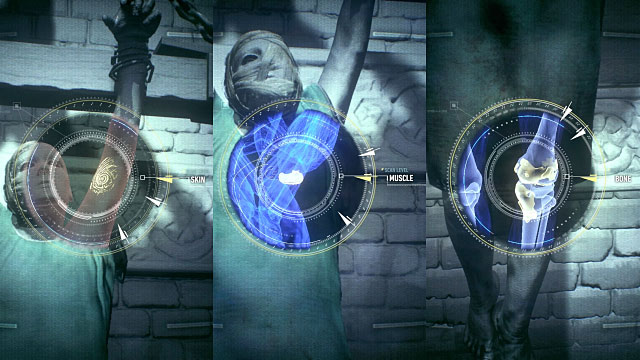 Second corpse can be found on the roof in the central part of Bleake Island, northeast from clock tower (picture 1).

Use the scanner and localize the zones shown on the picture 2:

Finding and examining the third body 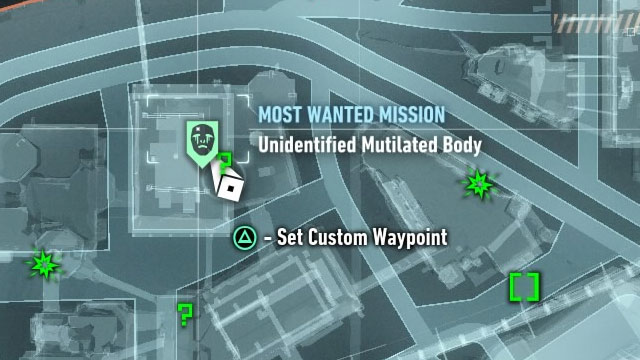 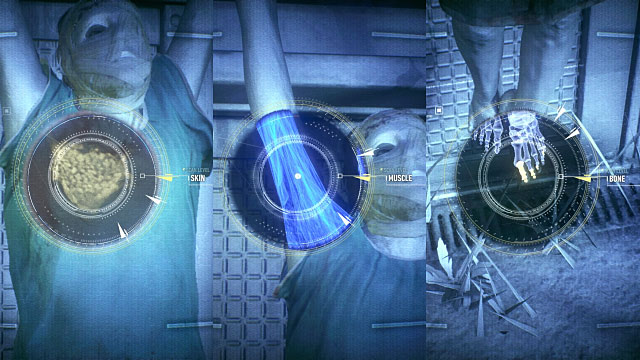 Third body can be found in the northern part of Miagani Island (picture 1).

Finding and examining the fourth body 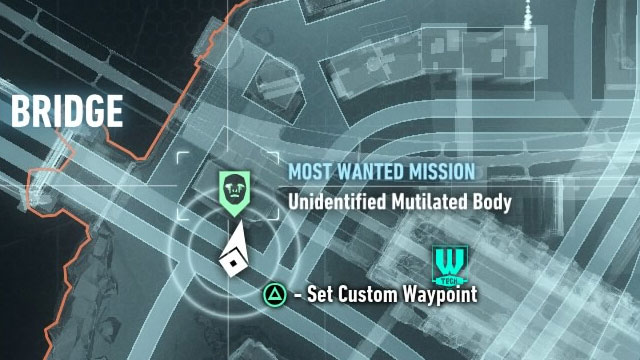 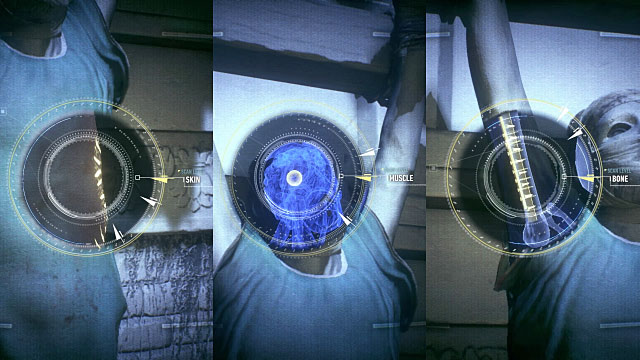 Fourth body can be found in the western part of Miagani Island, near the Salvation Bridge (picture 1).

Finding and examining the fifth body 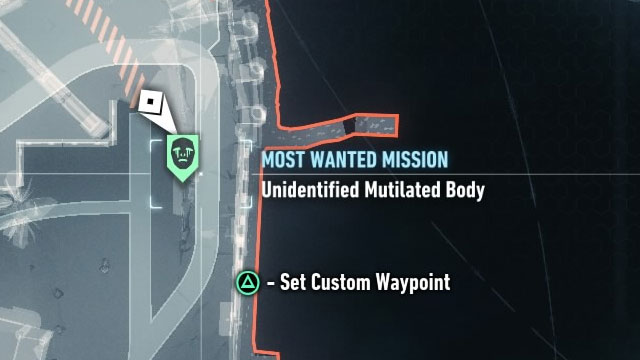 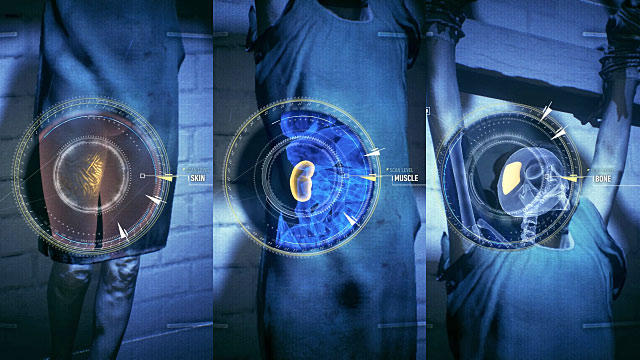 Fifth body can be found in the eastern part of Founders' Island (picture 1).

Finding and examining the sixth body 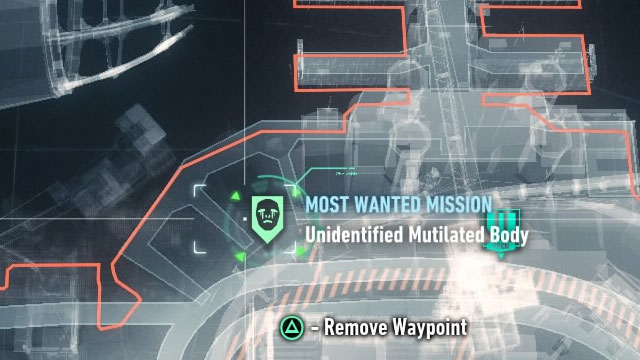 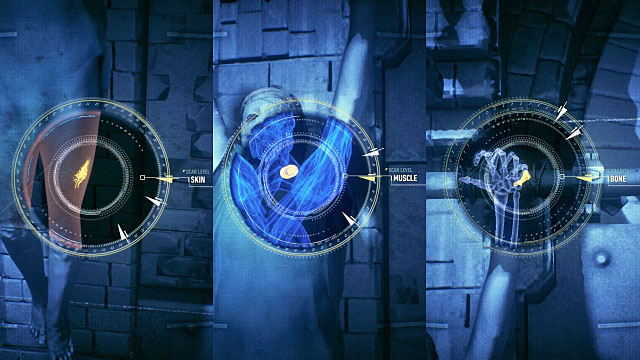 The final, sixth corpse can be found in the northern part of Founders' Island, near Stagg's airships (picture 1). 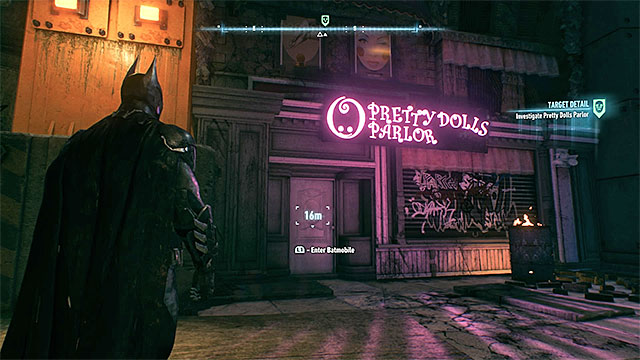 Entrance to the parlor

After investigating the sixth victim listen to another conversation with Alfred. You will be pointed to the Pretty Dolls Parlor south from the place where you found the last corpse. Once you reach the destination, leave the Batmobile and go towards the small entrance to the building. Go to the back and use explosive gel to destroy the weakened wall. Your objective is to reach a large, round operation room. There you will meet professor Pyg.

Defeating professor Pyg and his patients 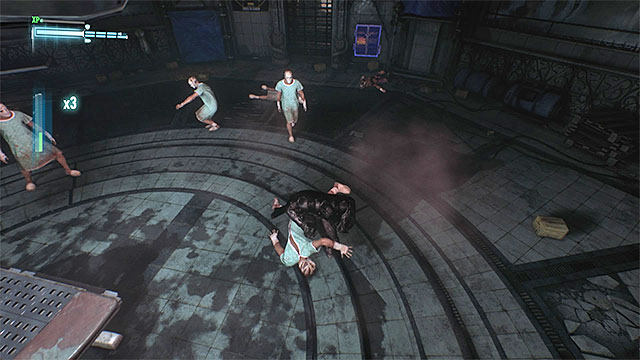 You must perform ground takedowns on Pyg's patients

First you must fight patients of the mad doctor. It might be tricky as regular attacks cannot eliminate them for good. The only way to permanently get rid of an opponent is to perform ground takedown on him after he falls to the ground. You must remember that performing the finisher takes some time and can be cancelled by other enemies. Because of that, you should activate the takedown only when you're standing near an isolated knocked down enemy. 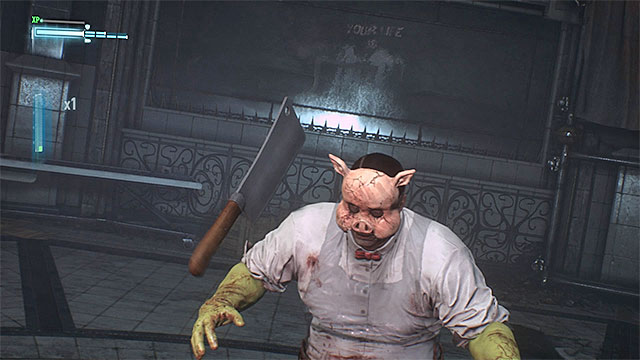 Throw back the cleavers thrown at you by Pyg

After you eliminate the first group of patients, professor Pyg and a new group of his minions will join the fight. During this battle, you should ignore the Pyg for most of the time and react only if he throws cleavers at you. Once that happens, press the counter key/button in order to block his attacks and throw back one of the cleavers. Focus only on performing takedowns on new patients during the rest of the battles. As earlier, try to pick only single enemies that are away from the main group, it will reduce the probability of failing the finisher. 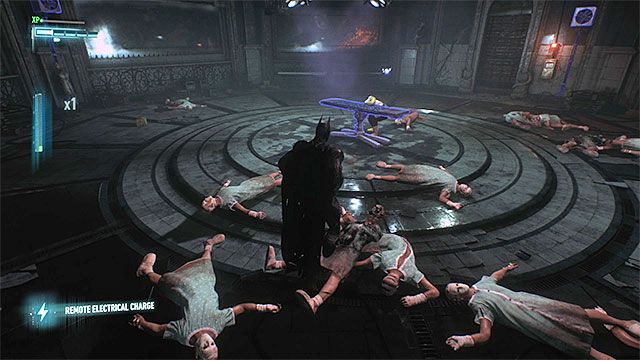 Take interest in professor Pym only after you get rid of all the patients. Wait until he throws another cleaver at Batman and perform the counter to throw one of the weapons back to its owner. Once Pyg is temporarily stunned, run towards the operating table highlighted in blue (picture above) and perform the takedown on the enemy - it will automatically end the battle.

Freeing the hostages and taking Pyg to the lockdown 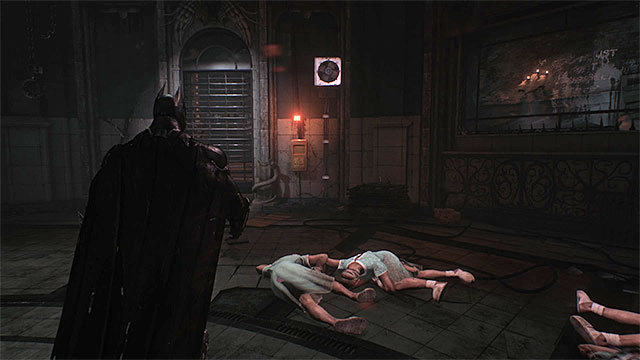 Break into the fuse box

Before you leave this location, find a fuse box on one of the walls. By breaking in you will free the hostages that were held in the upper cages. After that, pick up the unconscious professor Pyg. All that you have left to do is driving him to the GCPD lockup. The mission will end there.