On this page of our game guide to Batman: Arkham Knight we have prepared a description of Own the Roads side quest. It concerns neutralising the militia's control points by winning battles with groups of opponents.

In order to unlock this mission you must get close to one of the militia checkpoints related to this task and wait until the job is added to the mission window during progression in the main storyline. 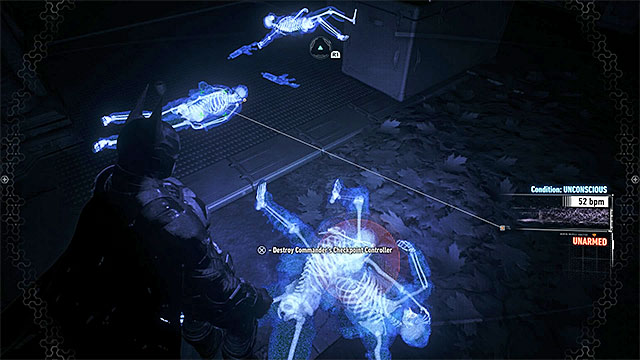 In order to complete this quest, you must destroy 20 militia checkpoints - 8 of them can be found on Miagani Island, 4 on Bleake Island and 8 on Founders' Island. You can reach the checkpoints in any order you want and you must find them on your own. You can either look around for fenced territories or use the maps shown below.

Once you get close to a checkpoint you must secure it. It is done by eliminating all the enemies found on its territory. Depending on checkpoint type, you can do it by playing only as Batman or (if, for example, you must additionally destroy enemy machines) you will need to use Batmobile's backup as well. No matter how you taken care of the enemies, once the battles end, you must find the body of the leader (detective mode will help you with that) and search him in order to obtain and destroy the device he possess. By doing so, you will lower the barriers and secure the checkpoint.

Important - While neutralizing checkpoints, Deathstroke will regularly contact Batman. You won't be able to fight him during this mission. However, completing it in 100% is required to unlock the duel with the mentioned villain in other side mission - Campaign for Disarmament. 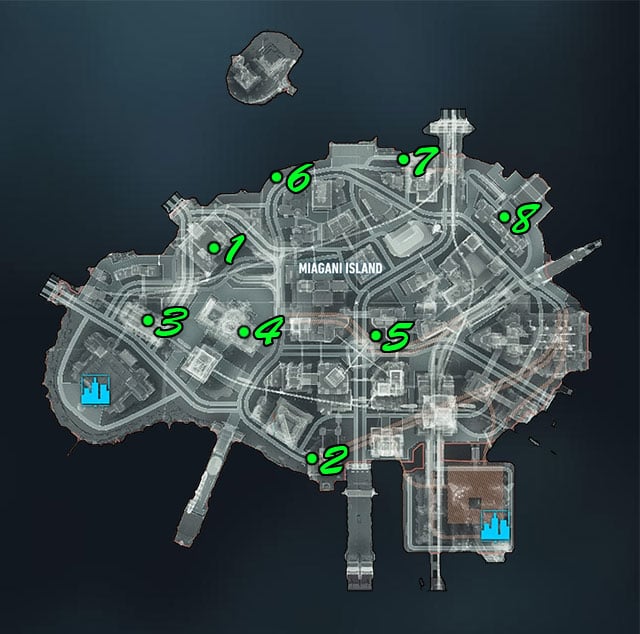 Point 1 - The fenced territory can be found near the garage gate that leads to the place where one of Riddler's trials took place. You can attack the bandits that can be found there with no backup, but in that case you must watch out, among other things, for enemies with shields, tasers and gunfire. Optionally, you can use the nearby jump to get to the place in Batmobile and secure the location with your vehicle.

Point 2 - The checkpoint is guarded by six armed enemies. One of them is a drone operator, you can use his machine to eliminate some of the enemies. The rest should be caught by surprise; you can, for example, use fear takedowns on them.

Point 3 - The checkpoint is guarded by enemies equipped with gunfire, but you can easily get close to them in the Batmobile and eliminate them without leaving the vehicle. 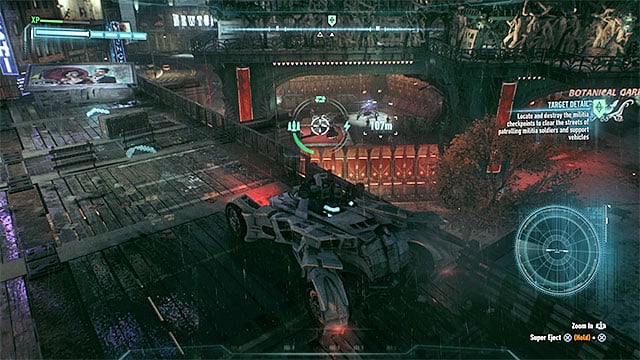 Point 4 - You will find drones in addition to the standard enemies in the fenced territory. Enter the Batmobile and find the path leading to the highly placed platforms near the checkpoint - they have been shown on the picture above. From that high place you will be able to easily clean the checkpoint.

Point 5 - The checkpoint is guarded by a small group of bandits that don't have guns nor other advanced gadgets. The only thing you must be worrying about is quickly eliminating two medics that are part of the group.

Point 6 - A small group of soldiers can be found in the fenced territory. While fighting them, you must only watch out for the enemy in heavy armor whom you must defeat with the beat down.

Point 7 - The checkpoint is guarded by eight opponents. There are no enemies with guns among them. The only impediments are soldier in heavy armor and bandit with a shield (use cape stun and stomp). 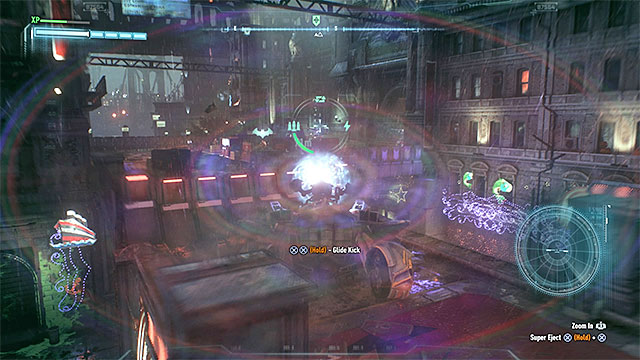 Point 8 - On the fenced territory, in addition to a group of enemies, you will find two drones. You should use Batmobile to destroy them. Search for a place on the same level on which the enemy checkpoint can be found. From there you will be able to easily shoot and neutralize the drones. 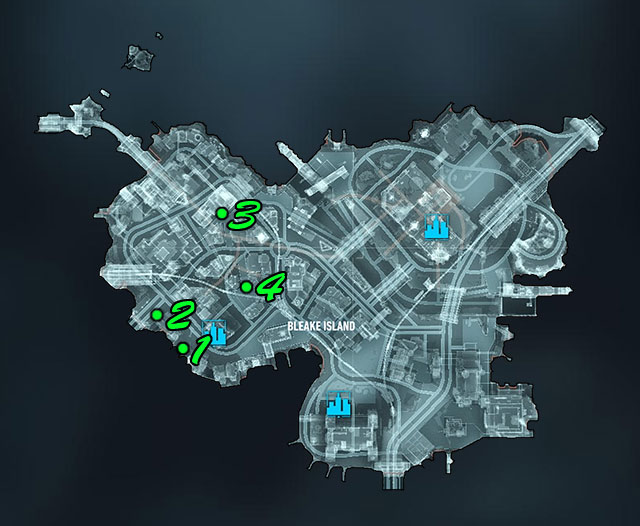 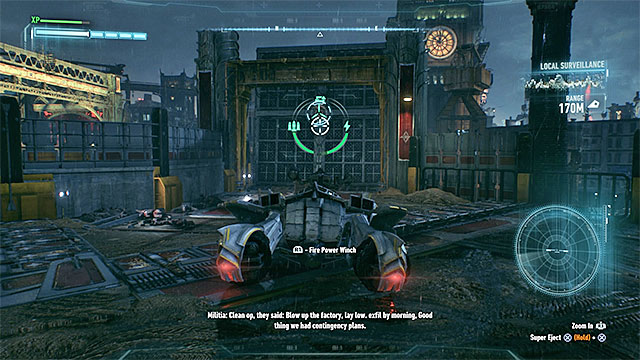 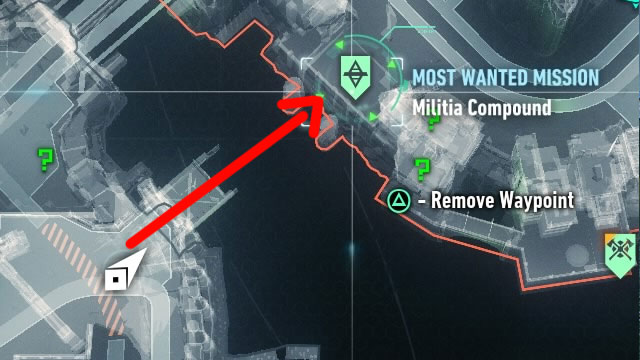 Point 1 - At first the checkpoint seems to be extremely hard to secure due to bandits and drones and the lack of possibility to reach it in the Batmobile. The latter can be solved. To do it, first you must secure the checkpoint number 1 from Founders' Island. Then, find the raised gate shown on the picture number 1 and use the winch to lower it down. Now you can accelerate and jump with the help of afterburner (it has been explained on picture number 2). You should land precisely inside the fenced territory, so all that's left is to utilize Batmobile's weaponry.

Point 2 - The checkpoint is guarded by a small group of bandits. Good news is that you can surprise them by breaking in the control panel with the use of the remote hacking device and unlocking the alternative passage. Bad news is, among the enemies you will find one enemy in heavy armor. 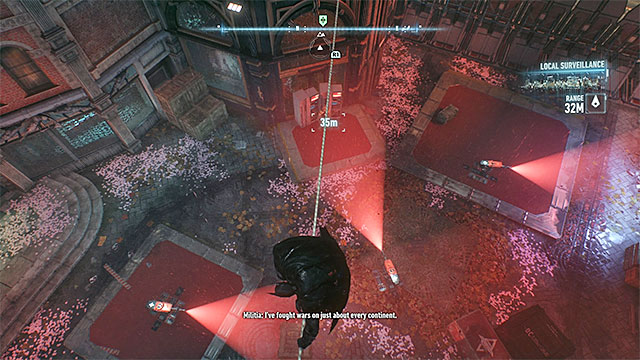 Point 3 - Three defense turrets and a single enemy can be found in the fenced territory. The guard is by default turned with his back to the sentries. Move above the turret that isn't moving and use remote hacking device on one of the other ones. Sabotage the second rotating turret, get back up and use the mentioned gadget again. Now destroy two remaining turrets and after that stun the bandit.

Point 4 - The checkpoint is guarded by a large group of enemies. Additionally, you will find two defense turrets there, but you can land behind them. Before starting the battle, use the jammer on the weapons which some bandits have. When the fight starts, eliminate the medics in first order. Additionally, watch out for martial arts experts, enemies with tasers, enemies in heavy armors and enemies with shields. 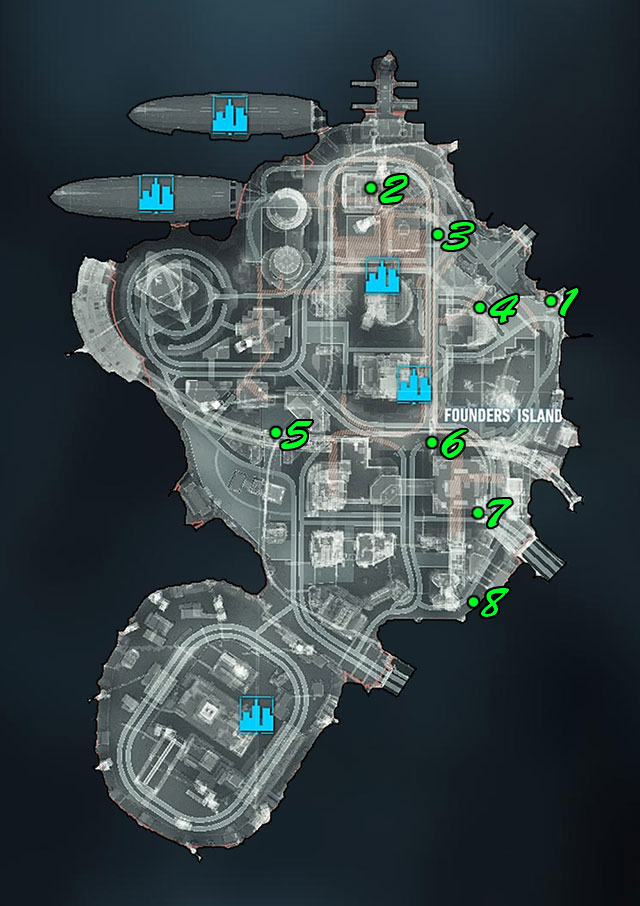 Point 1 - Checkpoint is guarded by a medium-sized group of bandits. Some of them have gunfire, so it is advised to use the jammer to make it impossible for them to shoot at you. Additionally, you should take your enemies from surprise (fear takedowns are good idea). Important - Raised gate can be found here. You can use winch on it and unlock a jump that will allow you to reach checkpoint 1 from Bleake Island. 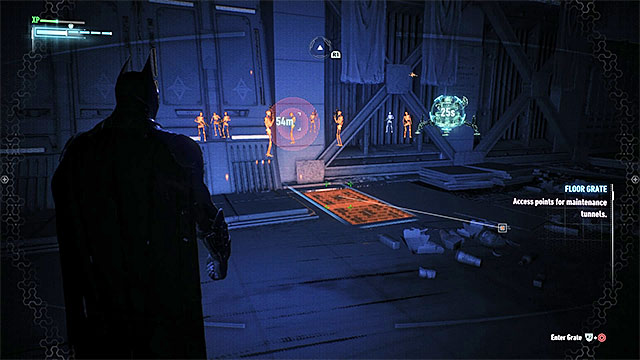 Entrance to the ventilation shaft

Point 2 - Destroying this checkpoint requires great precision and conviction - enemies with guns and a single drone can be found in the fenced zone. Start by getting to the barricade and using jammer on weapons of few selected enemies. Then find the ventilation shaft in the ground and use it to reach checkpoint's territory. Before you jump out of the shaft, hack the drone with the remote hacking tool. Then, position yourself under one of enemy groups and use the fear takedowns. When the battles start, try to quickly jump towards enemies with weapons and, if needed, help yourself with smoke bombs. Try to win the battle before the drone reactivates (otherwise, escape with the grappling hook).

Point 3 - Eight bandits can be found in the fenced territory. You must watch out during the battle, as four of them are martial arts experts (try to perform perfect counters) and some of them have tasers. 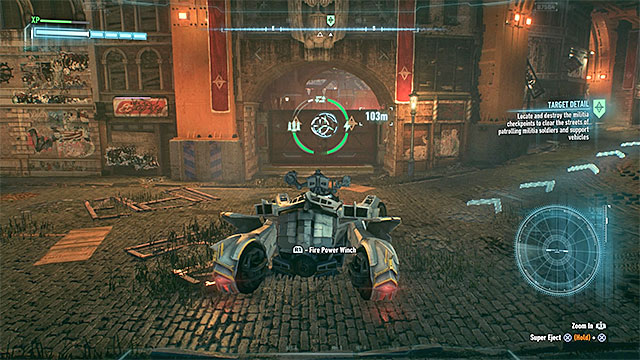 Point 4 - In addition to the enemies fully equipped with weapons, defense turrets can be found on the checkpoint territory. Luckily, you don't need to take them out personally, as you can enter the territory in Batmobile. To do it, find the gate shown on the picture above and pull it out with the winch. 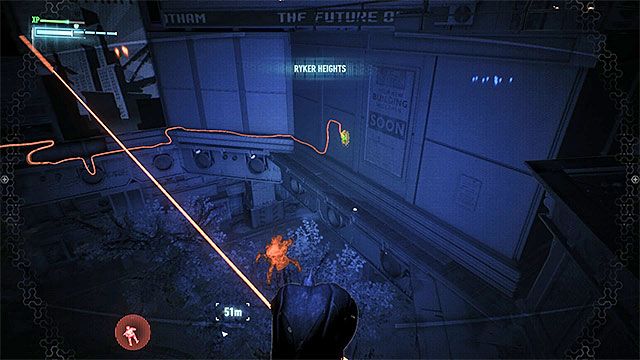 Point 5 - In addition to bandits, you can find drones in the fenced territory. By default, you can't get there in Batmobile. The solution to that problem is finding the button shown on the picture above. Using the remote hacking device in that place will lower one of the nearby barricades. Use the new passage and shoot the enemy targets from the higher level or jump down with the vehicle and then eliminate the opposition.

Point 6 - The checkpoint will be guarded by five enemies with guns. First three opponents can be neutralized with fear takedown. Jump towards two remaining with no special help or with the use of smoke bomb.

Point 7 - You will find a group of bandits in the fenced territory. They won't be using guns, but one of them will be equipped with heavy armor. It is wise to leave him for the end and help yourself with beat down.

Point 8 - There is a small group of bandits on the fenced territory. Try to use jammer on weapons used by some enemies. Additionally, when the battles starts, watch out for enemies with tasers.