On this page of our game guide to Batman: Arkham Knight we have prepared a description of Campaign for Disarmament side quest. Batman has to find mines in different parts of the city and disarm them. At the end of the mission, you also have to defeat the additional boss of the game - Deathstroke.

This mission unlocks automatically at a certain point of the main storyline so you can't miss it. More specifically, it happens after the Track the Arkham Knight's vehicle using the Forensics Scanner main task in which you disarm the first mine. From that moment you can find new explosives on your own. 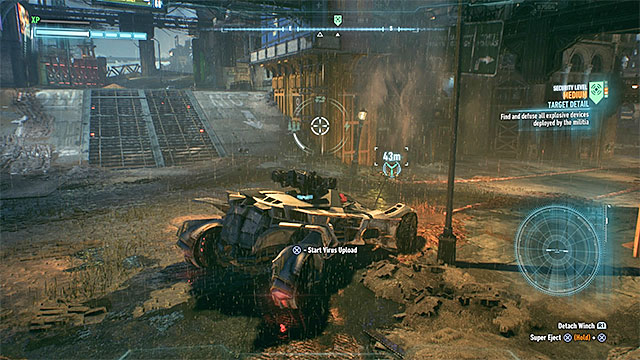 You must use the winch before and after the battle

In the first part of this mission you must disarm fourteen mines - five of them can be found on Miagani Island, four on Bleake Island and five on Founders' Island. You can reach them in any order you want, and you must find them on your own. The fact that they pulse in red will be helpful - position yourself on building's roofs and look around. Of course, you can also simply use the maps shown below.

Once you get close to a mine with the Batmobile, you must use the winch on the object and confirm that you want to start installing the virus. It will trigger a battle in which, depending on difficulty level (different dots right from the side mission marker), you will have to destroy from a dozen to even few dozens of tanks and flying machines. After eliminating enemy forces you must return to the mine and use the winch once again. Finally, you must manipulate the gas pedal properly so that the engine revolution bar remains in the orange field. This will lead to mine's explosion.

Important - Many mines are guarded by large groups of enemy vehicles, there might be even 40-60 tanks and flying drones among them. Before you start this side mission, you should buy as many vehicle upgrades as possible, especially the ones that upgrade the armor and firepower of main weapons. 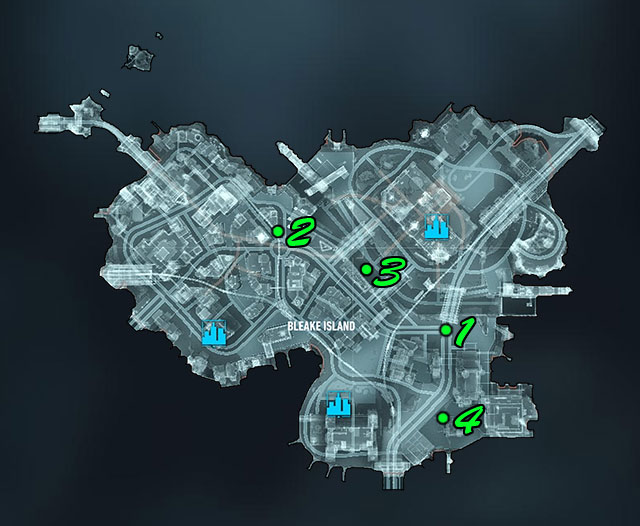 Mine 1 - You disarm this mine during the main mission Track the Arkham Knight's vehicle using the Forensics Scanner. It will be the first mine you destroy in this task.

Mine 2 - The mine can be found at the large crossroad. You must destroy more than 30 tanks during the battle, including many elite enemy units.

Mine 3 - The mine can be found in a large sewer and disarming it won't be easy, as in order to do it, you must destroy almost 50 enemy machines. Watch out especially for tanks appearing on upper streets. You can destroy them with precise shots (it is a good idea to zoom the view) or try to hack them.

Mine 4 - The mine can be found at the railroads. It's weakly protected, you must eliminate "only" 20 enemy vehicles. 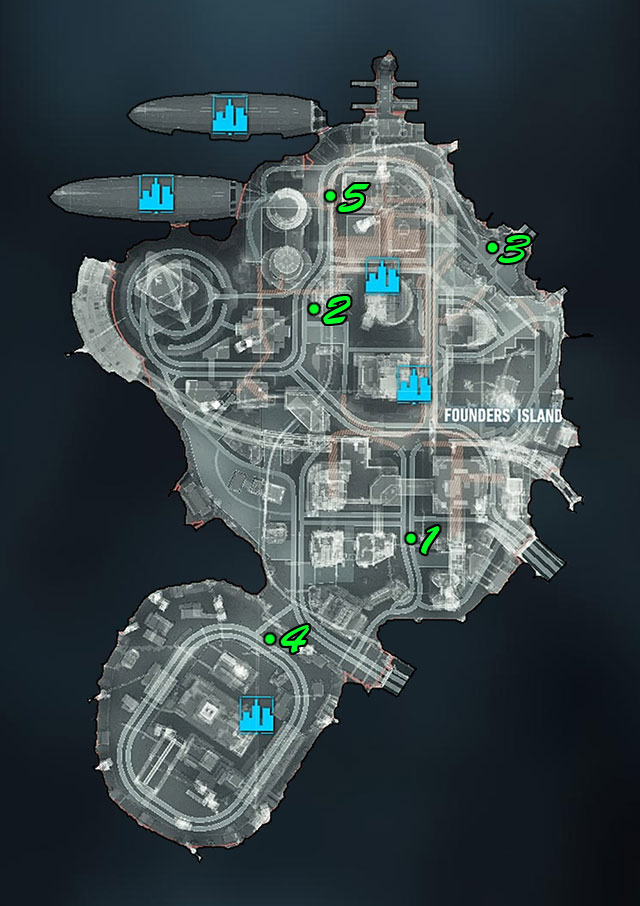 Mine 1 - The mine can be found near a crossroad and a large ramp. Once the battle starts, you will have to eliminate, among other enemies, flying drones and tanks able to shoot rockets at you.

Mine 2 - The mine is located in a well visible place near the station. Two dozens of enemy machines are guarding it.

Mine 3 - The mine can be found near one of the bridges leading to the neighboring island. There are more than 30 enemy vehicles to defeat there, including flying drones.

Mine 4 - The mine can be found at the entrance to the Adams port. In order to disarm it you must face 40 enemy units.

Mine 5 - You will find the mine at a small roundabout with a tree in its center. This time you will have to destroy almost fifty machines. 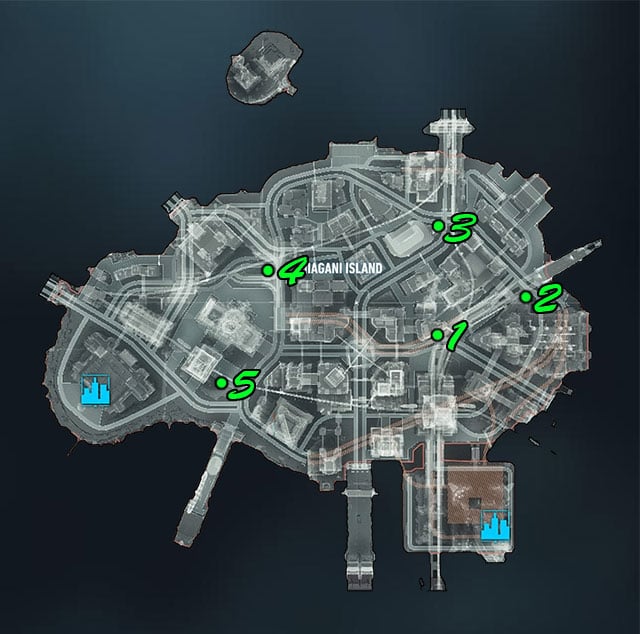 Mine 1 - The mine can be found on the sidewalk near the Gotham Bank. In order to disarm it, you must destroy two dozens of enemy machines.

Mine 2 - The mine can be found at a small roundabout. There you must participate in a quite challenging battle during which you must destroy three dozens of enemy units.

Mine 3 - The mine can be found near the crossroad, it is guarded by 22 enemy machines. It shouldn't be hard to eliminate them.

Mine 4 - The mine can be found near the lower road. It's one of the lesser guarded ones, you will have to destroy only 20 enemy vehicles.

Mine 5 - The mine can be found at the base of a large metal construction. You will have to eliminate two dozens of enemy units.

Second part of this quest is about capturing and arresting Deathstroke. However, the game won't allow you to do it immediately. To be able to fight this villain you must first:

Only after fulfilling those requirements Deathstroke will contact Batman and a new point will be added to the world map. The point will guide you to the Grand Avenue district on Miagani Island, where the fight will start. 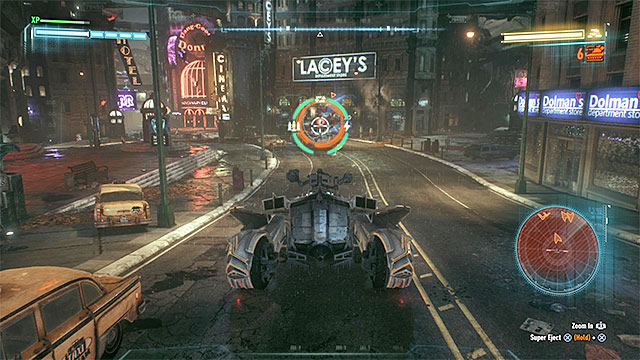 After parking the Batmobile in the marked location, the battles will start. At first you should completely ignore the machine controlled by Deathstroke. Instead, focus on destroying the five Cobra tanks accompanying it. As you probably remember from the main storyline, you must carefully drive to those tanks from the back (important - they scan the territory around them from time to time!) and wait until they are targeted. A single hit should be enough to destroy a tank. Remember to get away from the place of attack immediately after shooting. If you get targeted by a Cobra, you must hide in a back alley as quickly as possible (afterburner can be helpful). 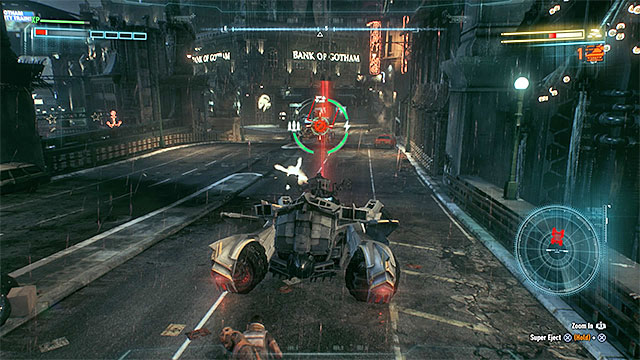 Focus on Deathstroke's tank once all Cobra tanks are destroyed. In this case you don't need to aim at any armor's weakpoints. Once you get close to enemy machine, start the regular attack with 60mm cannon. During the assault try to avoid taking any damage from retaliating enemy. Use dodge steering engines to get away from red beams and circles appearing on the ground. Additionally, use Vulcan cannon to shoot down rockets flying at the Batmobile. Deathstroke's machine isn't extremely resistant and destroying it should take about half a minute.

Wait until Deathstroke is placed in the Batmobile and drive him to GCPD arrest. It will end the mission.