On this page of our game guide to Batman: Arkham Knight we have prepared a description of Occupy Gotham side quest. As part of this mission, you must reach guard towers scattered all over Gotham and sabotage their terminals.

This mission unlocks automatically at the specific point into the storyline, and therefore you cannot miss it. The mission in question is the Find a way to infiltrate the Stagg Enterprises airships, main mission, where you sabotage the first watchtower. From now on, you can reach the rest of the towers off your own accord.

The pattern of actions 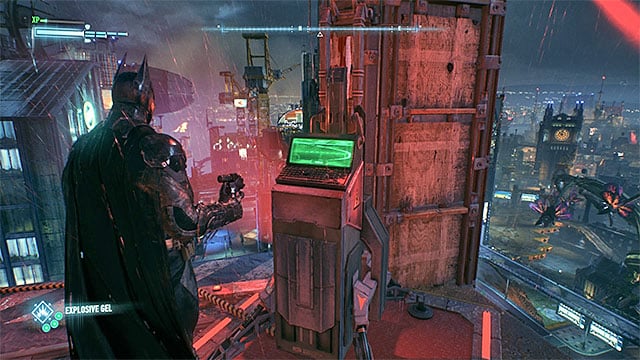 To complete this mission, you need to find a total of 21 watchtowers - 8 of them are on the Miagani Island, 4 on the Bleake Island and 9 on the Founders' Island. You can deal with the towers in any order and you need to locate them on your own. From afar, you can tell them apart by the red cones that represent the range of the turrets on them. Of course, you can also use the maps provided below.

After you come close to a watchtower, you need to deal with all the bandits there. It is a good idea to scan the area with the detective mode to find out about the numbers of the enemy and learn the deployment of turrets, which need to be avoided at all costs. Whether you rely on open confrontation or eliminate all the enemies stealthily, is up to you. After you secure the area, Batman needs to locate the interactive terminal, which makes the tower work. Your objective is to destroy it and for this, you use the explosive gel.

Note - Starting with the moment, at which you destroy the second tower, Batman will contact Deathstroke on the radio, after each successful sabotage. You won't be fighting him during this mission, but completing it in 100% is required for unlocking the duel with that villain in another optional task - Campaign for Disarmament.

Watchtowers on the Bleake Island 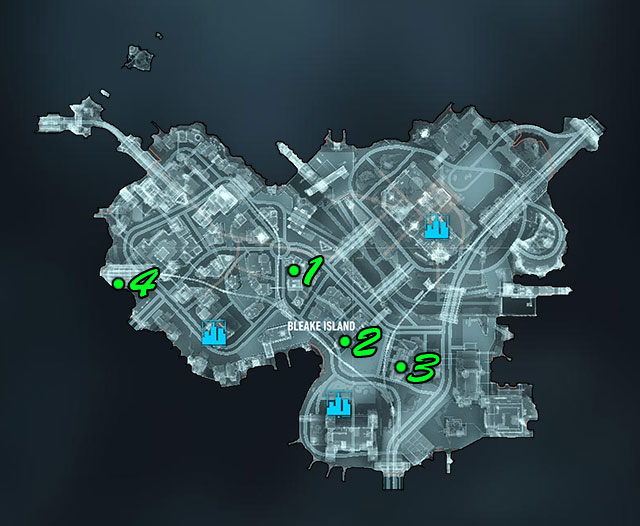 Watchtower 1 - Near the terminal, there are two drone operators and it is them that you should deal with in the first place, because hacking into the drone will allow you to eliminate several bandits without raising any suspicion. Pay attention to the single medic here. You cannot let him treat the rest of the enemies.

Watchtower 2 - The rooftop with the opponents on and the terminal, are being monitored by the turret. Use the remote hacking device to disable it for one minute and then attack the enemies. During the fights, be especially wary of the opponents with firearms and the shielded opponent, because he is wearing heavy armor. If you run out of time, while eliminating the opponents, escape to a vantage point and hack into the turret again.

Watchtower 3 - After you reach the terminal, first locate the drone operator, hack into the drone and eliminate, at least, one bandit this way. In this location, there also is an opponent with a minigun and he is the last one that you should be taken down (also, you can attack him using the drone).

Watchtower 4 - The terminal is on one of the middle levels on the building and it is a good idea to use the detective mode to find it. Near the terminal, there are two regular bandits and you should have no problems eliminating them.

Watchtowers on the Founders' Island 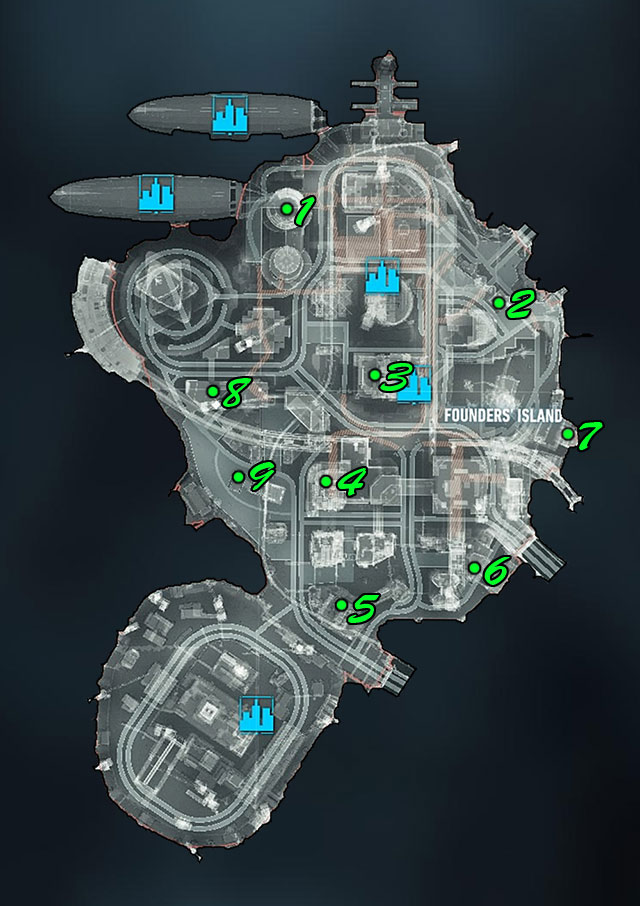 Watchtower 1 - You neutralize this tower during the storyline mission - it is Find a way to Infiltrate Stagg Enterprises Airships. To learn more, see the walkthrough for this mission.

Watchtower 2 - You can find this terminal on a small rooftop with a group of bandits on. Try to attack the opponent with the firearm, in the first place, and then prevent the rest of the bandits from seizing that weapon.

Watchtower 3 - There is a quite big building to secure, here. Apart from that, there are only elite bandits here. Try to start by eliminating the two medics, which will prevent them from healing the rest of the opponents, later into the fight. Finally, deal with the four (!) opponents with miniguns. Use the voice synthesizer to lure them into a seclusion and attack afterwards. Additionally, it is a good idea to disable some of their weapons, with the disruptor, thanks to which you will not get under saturation enemy fire.

Watchtower 4 - This terminal is being watched by seven armed bandits. You can eliminate them one-by-one, while staying in hiding. Still, you need to know that among the opponents, there is a medic and an opponent with the detective mode detector (use it with moderation, or eliminate that one soon after you reach this tower).

Watchtower 5 - Near the terminal, there are three armed opponents. One of them is the drone operator and you can use this to your advantage. Thanks to the seizing the drone, you will be able to deal with all of the bandits in one take. If this does not work for you, try to lure them away with the voice synthesizer.

Watchtower 6 - You need to make it over to a relatively small rooftop, where there is a group of bandits. Among others, you will have to deal with two martial artists here, so you need to ensure proper delivery of dodges.

Watchtower 7 - You can try to eliminate the opponents around the terminal either silently (it is a good idea to lure them away, in such a situation) or deal with them in open fight. Regardless of what you do, try to eliminate two medics pretty soon. You also need to watch out for the elite opponent with shield, whom it is best to leave for the end.

Watchtower 8 - Around the terminal, there are eight opponents. After the fighting starts, you need to render them unable to use their firearms and stun guns. Apart from that, deal with the heavy opponent.

Watchtower 9 - The terminal is on a small rooftop that is being monitored by a nearby turret. Hack into the turret before you take on the opponents around the terminal. You will have to deal with, as many as, three medics, which makes eliminating them a priority. Apart from that, watch out for the two martial artists.

Watchtowers on the Miagani Island 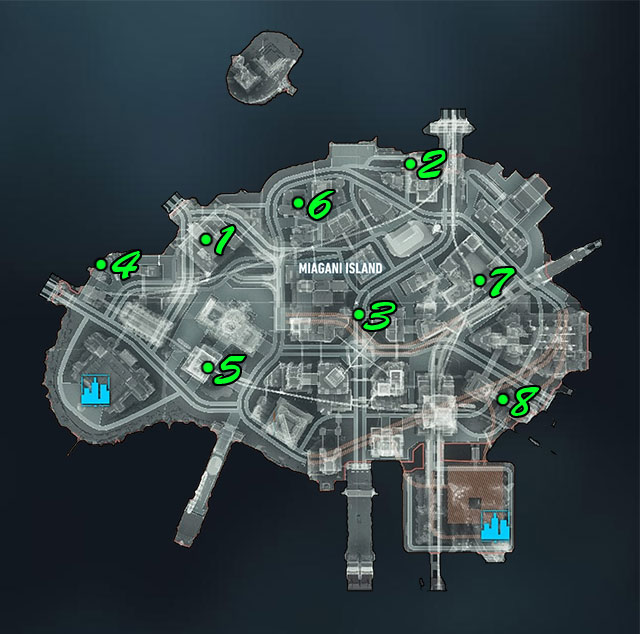 Watchtower 1 - The terminal is within the range of two turrets, but you can get to the control panel on the rooftop above and disable them. Only then, deal with the bandits around the terminal - watch out for the heavy opponents and ones with stun guns.

Watchtower 2 - First of all, try to locate the opponent with the detective mode disruptor. Neutralizing him will make dealing with the rest much easier. Finally, deal with the elite opponent with minigun, thanks to which you will take him down without being bothered.

Watchtower 3 - The terminal is on the footbridge between buildings and there are two rotary turrets right next to it. Hack into one of the turrets, glide towards the other one, at the right moment, and sabotage it. Then, disable the one that you have hacked into, before it returns to the initial mode.

Watchtower 4 - The terminal is on a small rooftop and it is being watched by a group of bandits. It is not too easy to defeat them, because one of them has a stun gun and another one is a heavy one, who you need to use beatdown on.

Watchtower 5 - In here, there is a large metal structure and the good news is that, by default, the bandits are standing within considerable distance of each other. Among the opponents, there is a drone operator and if it is possible, it would be a good idea to hack into it and use it to your advantage.

Watchtower 6 - The terminal is within range of the turret on the nearby wall so, you should use remote hacking device early enough, to disable it for 60 seconds. As for the bandits, they are armed so, it would be a good idea to eliminate them stealthily, or rely on fear takedowns and smoke pellets fort escape, in case of being detected.

Watchtower 7 - Near the terminal, there are quite a few bandits that it is going to be difficult to eliminate. Try to attack them by surprise and after the fighting starts, pay the most attention to the heavy opponent - you first need to stun him with the cape, jump onto him and launch beatdown. Apart from that, prevent the rest of the opponents from using firearms and try to take out the medic as soon as possible.

Watchtower 8 - The terminal is on the footbridge located within the range of two turrets. Fortunately, this problem can be solved by reaching the control panel, on one of the rooftops above. After you have dealt with the turrets, deal with the bandits and try to prevent them from using firearms (knock the weapons out of their hands and do not let them approach crates with guns).