On this page of our game guide to Batman: Arkham Knight we have prepared a description of Gunrunner side quest. Batman has to reach further Penguin weapon caches and sabotage all of them. At the end you have to arrest Penguin and free Nightwing.

The objective of this mission is to destroy the Penguin's five weapon caches and it is impossible to miss this one. This is so because you destroy the first cache during the main storyline. To learn more, see the walkthrough for the game and start with Meet with Nightwing to locate Penguin in the walkthrough for the main storyline. From the moment at which you destroy the first weapon cache, you can find the rest of Penguin's hideouts. Each time, Batmen will be contacted by Nightwing (you need to have this mission selected as active). 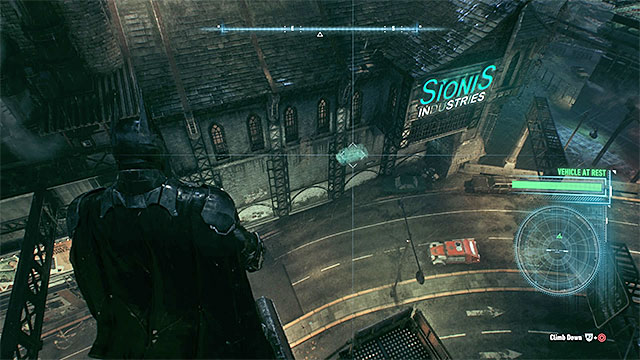 Your destination is the Sionis Industries building

After you listen to the conversation with Nightwing, head towards the Panessa Studios and find the van there. From the inventory, select the disruptor and use it to plant the tracking device on the van. After that, knock on the van's tail gate, which makes the bandits start escaping.

Just like in the main mission, you need to use grapple and gliding, to follow the van (at the distance of around 150-200 of it) and to make sure that you remain unspotted by the bandits. You need to continue, up until the moment where the vehicle reaches Penguin's hideout. It is located in the Sionis Industries building in the South-eastern part of Bleake Island. 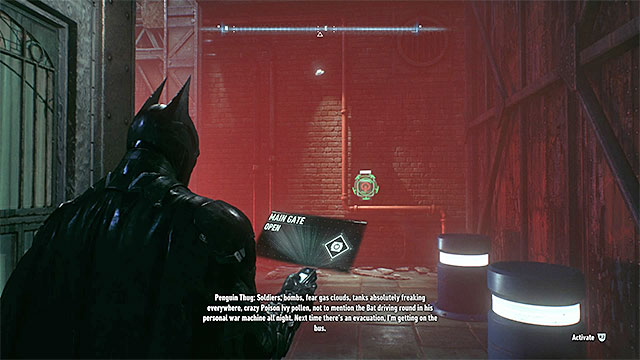 The panel that you need to break into, to open the gate.

Keep appropriate precautions, because the entrance is being protected with two turrets. Do not try to hack into them. Instead, use the remote hacking device to access the panel on the wall , which controls the main gate. After you lower the gate, use the batmobile remote control and destroy both of the turrets. You can now enter the building. Locate a big elevator shaft here and reach the very top, using the grapple. Here, find the switch that draws away the curtains under the glass roofing. 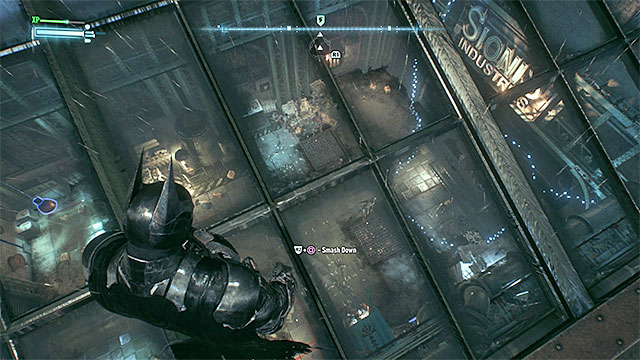 Attack the opponents by dropping onto them through the glass roofing

You can now leave the building. Use the grapple to make it over to its rooftop and walk onto its glass part. You need to drop through the glass into the building and start fighting the opponents in the main room. During the fights, deal first with the opponents with firearms and also make use of team attacks as often as possible, with Nightwing (it is a good idea to eliminate the bulky bandit this way).

After you win, enter the vault and use the explosive gel over the weapon cache. Leave, move the huge vault door and detonate the gel from a safe distance. 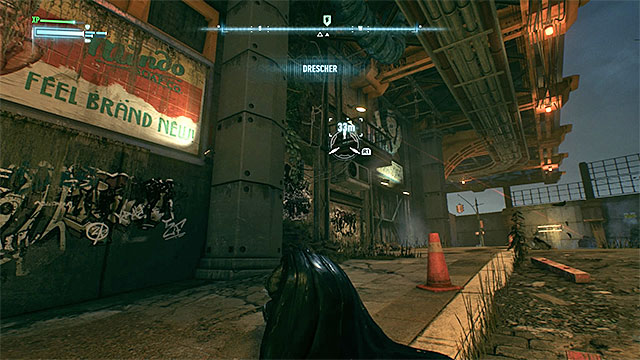 Sneak up on the sniper from the side

Contact Nightwing to learn that another van is in Kingston. In the same way as previously, use the disruptor to plant the tracking device and follow the vehicle, within a safe distance, into Penguin's new hideout. This one is in Drescher, in the North-Western part of the Founders' Island.

The entrance to Penguin's hideout is being guarded by a single sniper. Try to get him from the side, grab on to the balcony and perform a stealth takedown. After you have eliminated the sniper, enter the building. 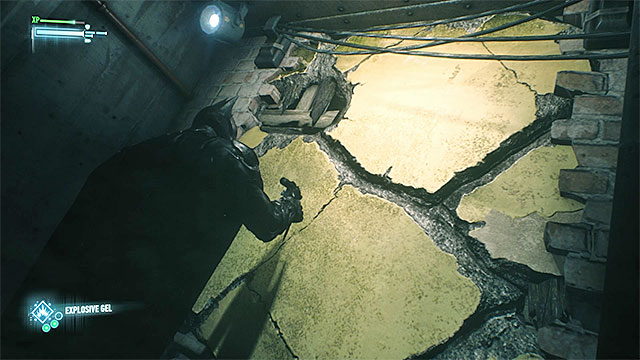 Go into the vertical venting shaft to the right. Sneak under the armed opponents (do not attack them yet!) and exit after you get to the other side of the weakened wall. Apply explosive gel to that wall, return to the shaft and detonate the charge. The explosion should knock out five opponents that have been standing at the wall. As for the remaining two, it is best to get them by surprise, with fear takedowns. 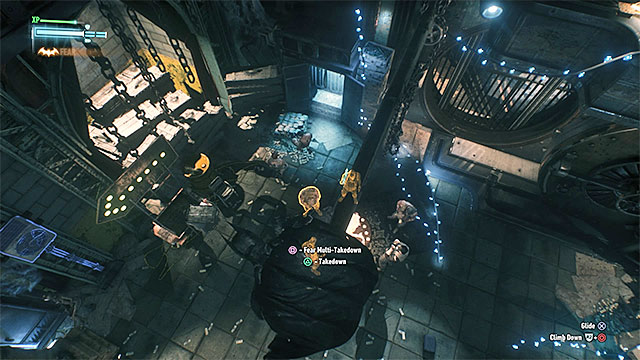 Attack the new opponents by surprise

Find another venting shaft under the ceiling. You first need to rip off the grate so, use the claw. Only after you have gained access to the shaft, use the grapple to get inside. In the next room, there are seventeen bandits where three of them pack firearms. Still before you start fighting, it is a good idea to use the disruptor to render their guns useless. Only then, start fighting. You will be helped out by Nightwing.

After the fighting ends, enter the vault, apply the explosive gel to the weapons cache there, close the vault door and detonate. 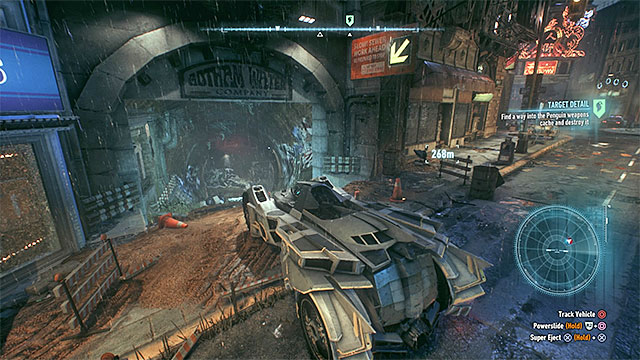 The entrance into the underground tunnels

Contact Nightwing, who gives you directions towards the van parked near the Salvation Bridge. Use the disruptor to plant the tracking device and, after it starts escaping, follow it. Penguin's men go to sewage treatment plant in Chinatown on Bleake Island. Approach the locked gate of the plant and contact Alfred, who suggests an alternative access route through the sewers. Call the batmobile and follow the markings on the ground. This way, you will get to the entrance to the sewers, not too far away Southwards from Penguin's hideout. 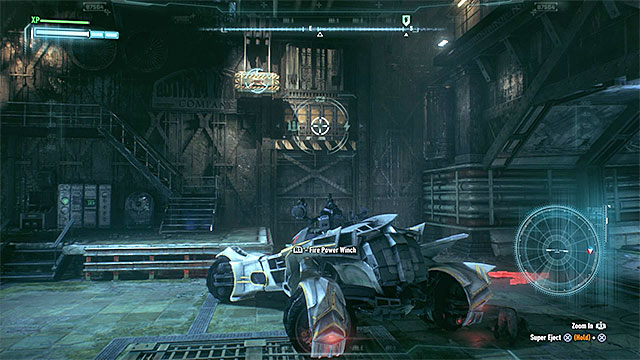 Use the hoist to gain access to Penguin's hideout

Stop by the blockades in the sewers and use the batmobile to eliminate the opponents here. After you have cleared the area, make it over, as Batman, to the upper left room. There, you find a switch that lowers the blockades. Drive the batmobile into the main hall and locate the catch on the right. Use the hoist on it and back up the car to lift the grate. Leave the batmobile here and reach, as Batman the newly-opened passageway. 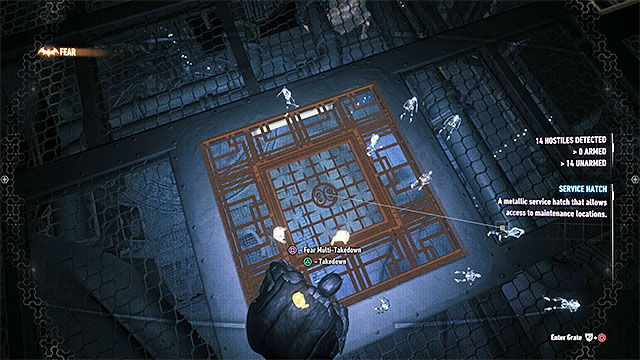 Use fear takedowns and start fighting

After you get above the bandits, stand next to one of the grates. It is best to start the fights with fear takedowns. You need to watch out here, because Nightwing is not going to help you out and some of the opponents (e.g. the ones with stun guns) require specific attacks.

After you have secured the area, enter the vault and apply explosive gel to the weaponry. Close the vault door and blow up the weapons. Soon, Batman will be contacted by Penguin, from whom you learn that he has captured Nightwing. Listen to the conversation with Alfred and returns to the sewers. 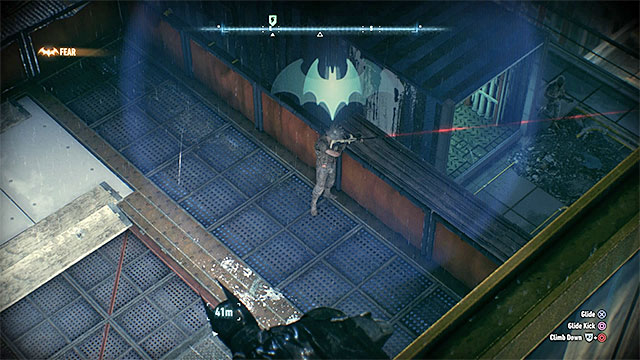 The sniper is one of the opponents guarding Penguin's hideout

Head to Otisburg on Founders' Island, because this is where Nightwing is being kept. It is not going to be easy to gain access into the Penguin's hideout, because the area is being monitored by a sniper and additionally, one of the six remaining bandits has a device that disrupts the functioning of the detective mode. Start by eliminating the sniper (it is best to glide to the rooftop of the building and locate him from the highest vantage point). With the rest of the bandits, deal only after you have taken down this one (if you get cornered, use smoke pellets). 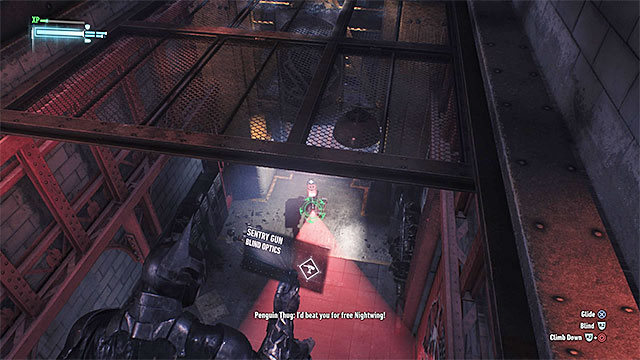 Hack into the turret from a distance

After you have cleared the rooftop of the building, take a look around for an elevator shaft and break into the fuse box on the right. You can now jump into the shaft and head into the next room with opponents. Locate the narrow passage into the neighboring room, thanks to which you will get above an operating turret. Disable the turret with the remote hacking device, run up to it and destroy it. You can now return and use the entrance of the venting shaft, which the turret was turned towards. 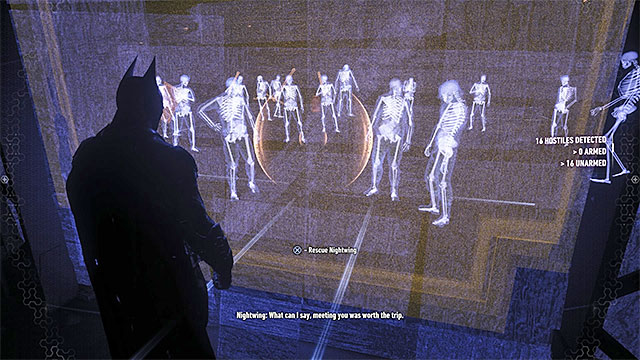 Stand by the wall, right behind the captured Nightwing

Follow the shafts and ignore the bandits around Nightwing, for now. What you need to do is reach the exit of the venting shaft, behind a weakened wall. Jump out of the shaft, stand near the wall and press the interaction key/button to free Nightwing. This will start a fight and it is quite demanding, because you will have to deal with opponents with shields (stun them with the cape and then crash onto them) and opponents with stun guns (use the electromagnetic pulse). The good news is that Nightwing is going to help you in the fights. 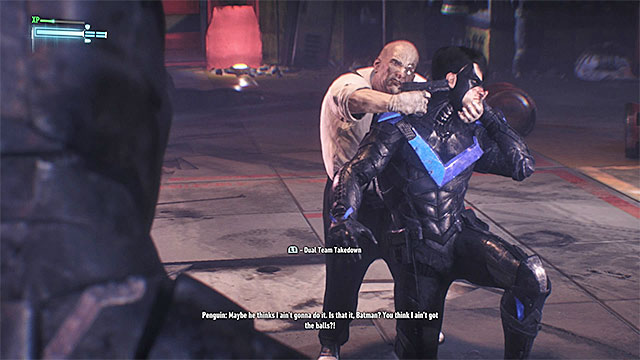 You can defeat Penguin with team takedown

After the fight, enter the vault here. Apply explosive gel to the weapons. After you exit the vault, you notice Penguin holding Nightwing. There is no special action that you need to perform here. Just wait until you can use team attack. After a short struggle, you can detonate the gel.

Finally, wait for Penguin to be thrown into the batmobile and take him back to the GCPD Police Station. Handing the Penguin over to the police ends the mission.