On this page of our guide to Batman: Arkham Knight you will find guidelines which explain how to find all secrets and collectibles as you progress through the main story. Interrogation of informants may help you in locating the collectibles. 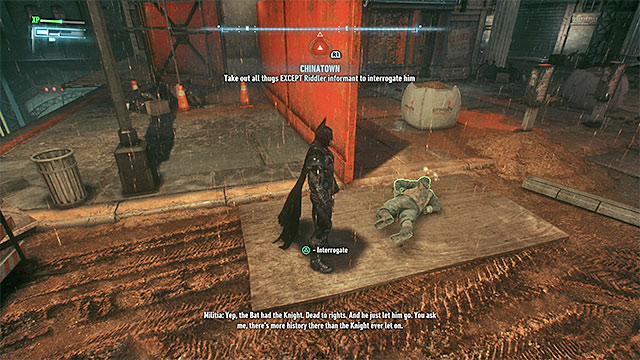 You need to deal with the informant's guards and interrogate him

Of course, you can find the individual collectibles entirely basing on this guide, but you can make things easier by making their general whereabouts appear on the map, as you explore the game world.

Icons of collectibles are added to the map in the way similar to the previous games in the series. During the game, you need to keep an eye out for Riddler informants, who are marked in green. After you have located one, deal with his guards, so that he is the only man standing. You can then approach the informant, or eject yourself from the batmobile, in his direction. You can interrogate the bandit by pressing the counterattack key/button. 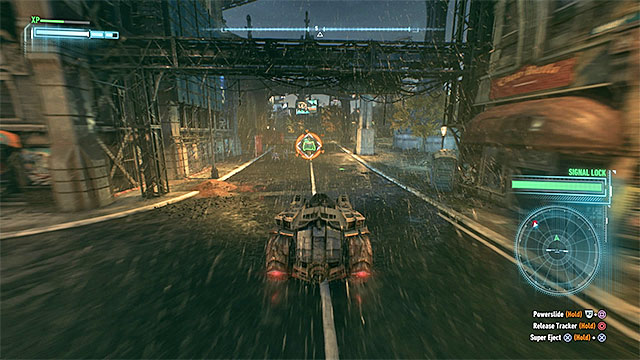 Destroy the vehicle of the informant

Some of the informants drive cars around the city and in such a case, the vehicle is marked in green. You can use batmobile to halt the enemy vehicles. At this point, it is worth noting that some of the informants drive cars armed with firearms and, in such a situation during the pursuit, you need to avoid enemy fire. To stop the enemy vehicle, you need to use the drone hacker. You can stop civilian cars after the first use. In the case of the better armored cars, you will have to use the gadget 2-3 times.

Note- Do not expect that interrogating one informant will reveal all of the collectibles. Only collectibles located in the closest are will appear on the map. Therefore, throughout the entire game, you need to interrogate several dozens of informants. It is a good idea to check out on the information in the corner of the map - it tells you how many riddles have not yet been solved in the individual location.

Note - After they are captured, some of the informants do not want to share their information with you and attack instead. In such a situation, you can try countering - if you succeed, you obtain the information anyway.

Note - If you accidentally stun an informant prematurely, you do not lose the opportunity to find the collectibles in that area. Simply, return to the district after some time and sooner or later, you will find someone marked in green. Do the same if new informants stopped appearing, even though you successfully conducted your interrogations apart from that, you can also try returning to the main menu and reloading the game.