On this page of our guide to Batman: Arkham Knight you will find a walkthrough to the final (tenth) trial set by the Riddler. At first you need to solve three puzzles in which you have to correctly move the metal plates. After that, you will have to duel with the Riddler for the first time (boss fight).

General rules and the area 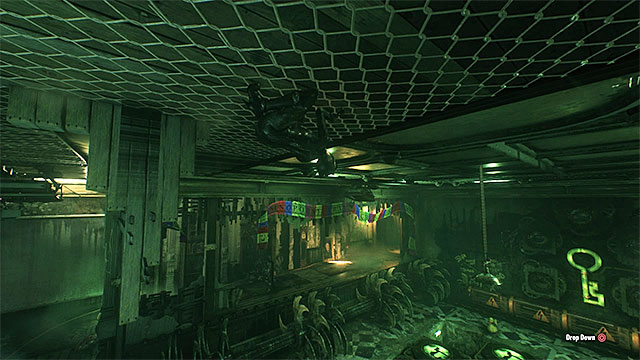 As Catwoman, crawl under the ceiling to reach the game board

Head back to Pinkney Orphanage and meet up with Catwoman in the building's main hall. Go through the green door that has been unlocked after the previous trial. After you reach a new location, switch to Catwoman and catch on to the grates under the ceiling. Make it over to the huge gaming board, this way, which is inaccessible for Batman (at any attempt to get there as Batman, blockades slide out). 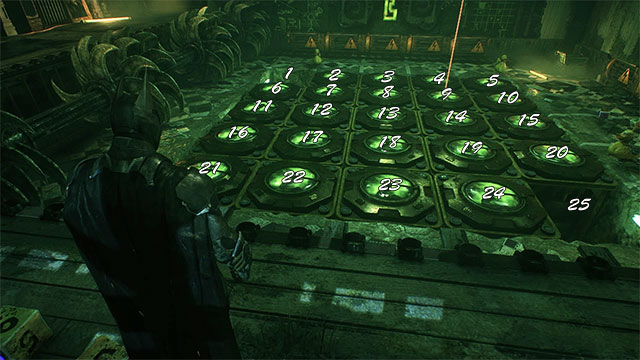 Here, you need to solve three puzzles and each one is highly demanding. The plan is that you move over a board with interactive pressure plates. For this, you need to use generators at the top of the screen and to the right (each generator can move a row of pressure plates associated with it) and you need to activate them as Batman, by sending the electromagnetic pulse. Additionally, in certain situations, it will be necessary to block certain pressure plates to prevent them from moving. You will be able to do this as Catwoman, by standing on the plate that should remain in its position, after the generator is activated.

Note - the board is made up of 25 fields that have been numbered in the way shown in the above screenshot - it is necessary that you refer back to this!

Note - Always remember to pick the appropriate type of the electromagnetic pulse. Depending on which one has been used, the plates move in different directions (up, down/ left, right).

The main premise of this puzzle is that you leave the spot, where there is plate 9, thanks to which the color of the beam turns from red to green. At the beginning, the free fields are in slots 1 and 25.

Switch quickly to Catwoman and pull her up to the interactive ceiling, because Riddler soon activates spinning blades. Wait for the cycle of the blades to end, after which they stop.

The second one is much more complicated, because you need to free two spots for red beams. The slots in question are 5 and 12.

Just like before, do not wait for the Riddler to start the blades and have the Catwoman grab on to the ceiling.

In this one, just like in the previous one, you need to "free" two beams. The slots in question are 21 and 23.

Now, you only need to grab on to the ceiling, as Catwoman (faster than before). Do not wait for the blades to end their cycle and join Batman. Return to the previous room, now. In here, there is a capsule with the last key. Thanks to obtaining it, you remove the collar from the neck of the Catwoman.

The first fight against the Riddler 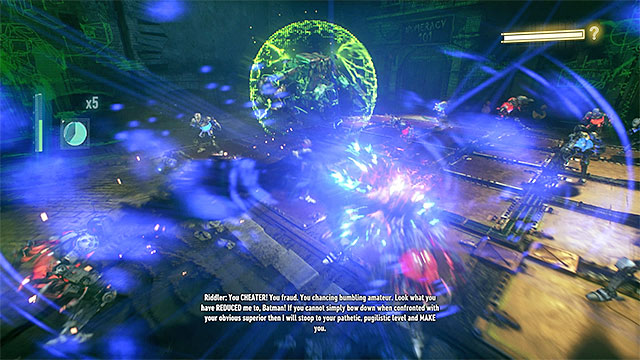 Steer clear of the Riddler's machine and attack his henchmen

Return to the main hall and try to leave the orphanage. This will result in Riddler appearing, in the flesh. He will be using the machine of his own design and you start your fight with him. After the fight starts, ignore the boss and attack Riddler's henchmen. Remember that Batman needs to fight the blue opponents and Catwoman the red ones. You need to expect that the Riddler may occasionally switch the colors. Apart from that, avoid the green projectiles fired by his machine. You can eliminate opponents effectively thanks to team attacks. After you have eliminated Riddler's goons, do not attack him, nor approach him, because the flooring around him will soon be electrified. You will be unable to finish this fight so, wait simply for Nigma to leave the location.

Note - you now need to find and solve all of the 243 puzzles connected with Riddler. Only then, will you be able to fight the fight proper with him. Detailed information on whereabouts of individual puzzles, and the ways to solve them, have been provided in separate chapters of this guide.