On this page of our guide to Batman: Arkham Knight you will find a walkthrough to the seventh trial set by the Riddler. You have to move metal tiles while being in the Batmobile. A new puzzle with keys awaits you. 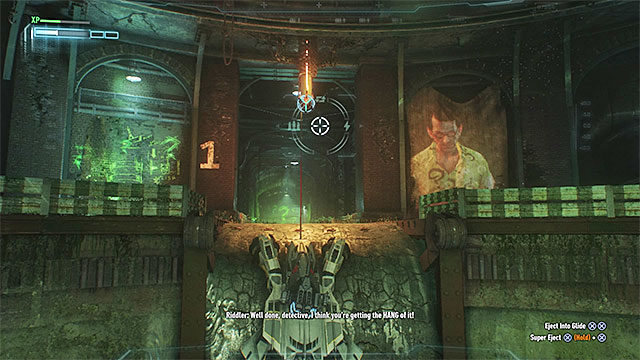 Grapple the catch next to digit 1

To start the seventh trial, you need to reach the garage gate near the Divinity Church. After you take the elevator, drive into the round underground hall. Here, you will have to solve a quite complex puzzle that assumes using the batmobile, to a large extent.

First of all, use the hoist of the batmobile on the catch closest to the starting point, i.e. the one next to which you can see digit 1 on the wall. You do not need to rip off anything here. Instead, use the hoist to lower yourself to the central chamber that is partially flooded. 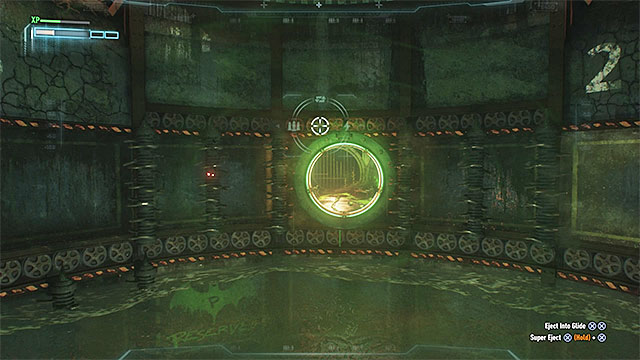 Keep lowering the batmobile, up to the point at which it is located right above the operating drills. The next step is quite difficult to get. You need to remain in your position and lean the analog stick to the side (or press a side directional button). Thanks to this, the metal plates under the wheels of the batmobile start moving to the side. Keep doing this, up until you reveal the passage shown in the above screenshot. Eject from the batmobile and glide there.

You will reach the location of the first pressure plate. Walk onto it to lower the water level in the central hall. After that, return to the batmobile and drive back up. Only then, release the hoist. 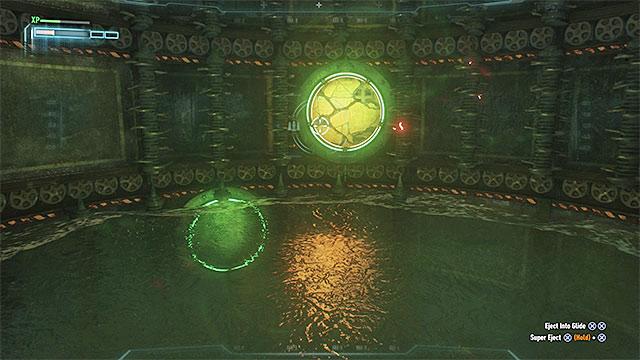 Destroy the weakened wall next to the second side-chamber.

Now you need to reach the interactive catch next to the white figure 2. Just like previously, use the hoist and start lowering the vehicle. After you get to the very bottom, lean the analog stick to the side, which moves the metal plates under the wheels and reveals new side chamber. By default, it is behind a weakened wall so, use the 60mm cannon. Glide into the side room and make sure that you do not land too soon, because you first need to get past electrified fragments of the flooring.

Walk onto the pressure plate. After the attempt to return to the batmobile, there appears a group of Riddler's henchmen. It is a good idea to start off with a team action with the batmobile. During the fights proper, stay away from the electrified fragments of the floor. 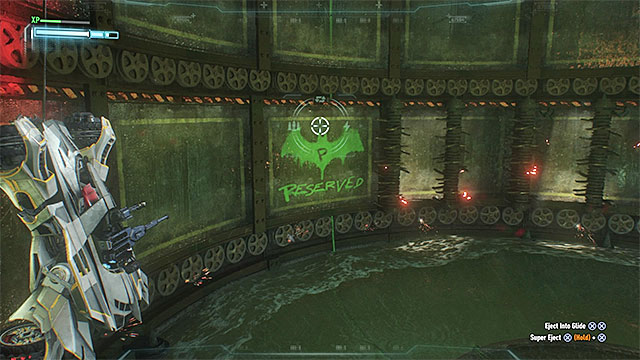 You can climb down the wall, to the very bottom, only if you have earlier moved the metal panels

After you defeat the mechanical opponents, return to the batmobile and STAY IN for a bit longer in this position. You need to restore the original arrangement of the moving panels. Therefore, move them in the direction opposite to the one that you moved them earlier. Only then, can you climb back up and release the hoist.

You can now head towards another interactive catch, by the white figure 3 on the wall. Use the hoist against the catch and lower the batmobile as far down as possible. Move the metal plates aside to reveal the passage below. Glide there and walk onto the pressure plate. 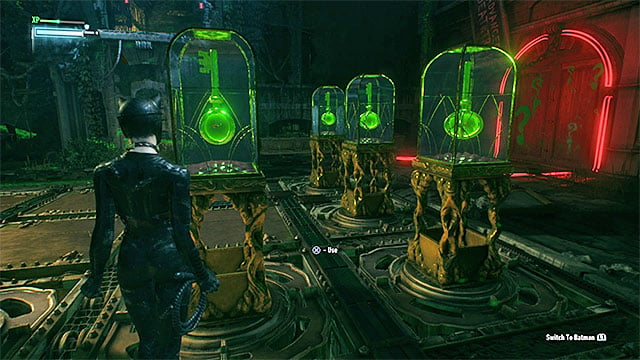 The attempt to return to the batmobile activates two turrets in the neighboring tunnel. Activate the batmobile remote control and destroy them. Only after that, reach the last pressure plate, which has been revealed thanks to lowering the water level in the main hall.

See the panel with bulbs under the ceiling and switch to Catwoman. The correct capsule with the key has been shown in the above screenshot. After you complete this puzzle, switch back to batman and leave the underground complex.