On this page of our guide to Batman: Arkham Knight you will find a walkthrough to the sixth trial set by the Riddler. Batman and Catwoman have to cooperate and stand on proper platforms. 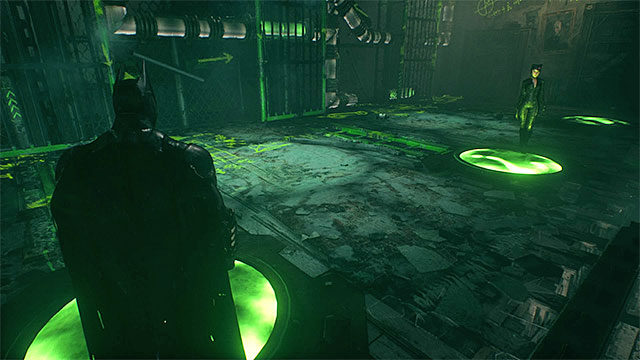 This trial is similar to the third one, because here you need to cooperate closely with Catwoman. Return to Pinkney Orphanage, enter the building, head to the main hall and go with Catwoman to the green door, which has been unlocked after you have completed the previous trial.

Stand by walking onto the pressure plates shown in the above screenshot, as both of the characters - Batman needs to be standing on the one to the left and Catwoman on the one in the middle. Select Batman and throw a batarang at the question mark on the left. Thanks to this, an orb of energy starts to travel and the premise of this puzzle is to move carefully between pressure plates, to manipulate the movable tunnels. This is to allow the orb to reach its destination. 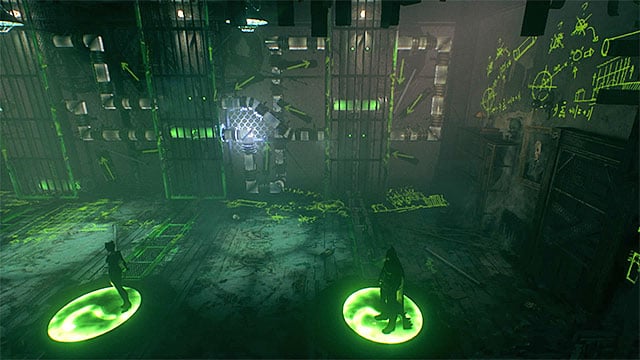 As Batman, walk over onto the right pressure plate and after some time, join him as Catwoman

Take the successive steps by following this description. You need to be very precise here, and patient, because the orb of energy is quite slow. Wait for the orb to pass through the first tunnel that has been elevated after Batman walked onto the left pressure plate. As batman, go right, pass by the plate with Catwoman on and reach the rightmost one (i.e. the one farthest away from the question mark).

Switch to Catwoman and wait for the orb of energy gets past "her" tunnel. Walk off the central plate and join Batman on his plate. Thanks to this, the interactive tunnel moves close to the ceiling. 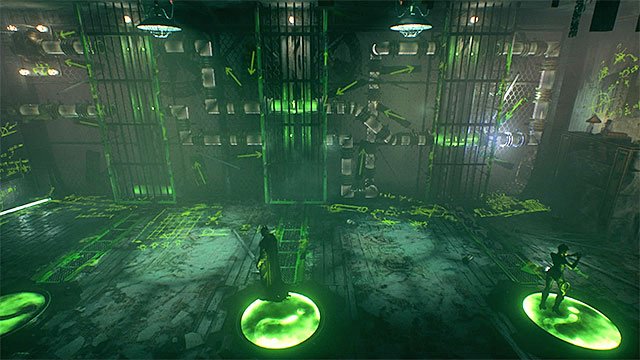 Batman needs to walk over to the central pressure plate

After the orb makes it through the upper tunnel, walk off the central plate as Batman (Catwoman needs to stay there). As Batman, go left and stand on the central pressure plate. 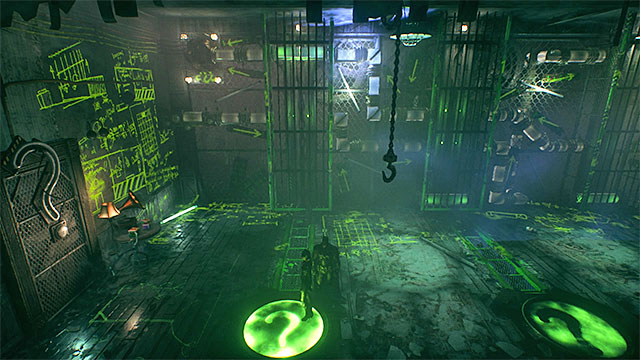 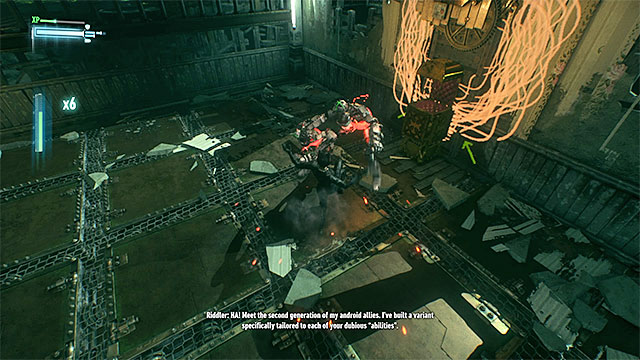 As Batman, attack the blue opponents, and as Catwoman, the red ones

After the fight, as Batman, jump onto the small platform with the green button, above the discharges. Switch to Catwoman and jump down to a lower level. Your attempt to collect the key results in a new fight with Riddler's henchmen, but the rules are different here. As Batman, engage the blue ones only and as Catwoman, the red ones. In the meantime, use gadgets or dodge, to avoid taking damage from those of the opponents that the other character is supposed to deal with.

You can now collect the key. After you have opened another part of the collar, switch back to Batman and leave.