On this page of our guide to Batman: Arkham Knight you will find a walkthrough to the third trial set by the Riddler. You have to solve a puzzle in which you need to hit question marks in the correct order. 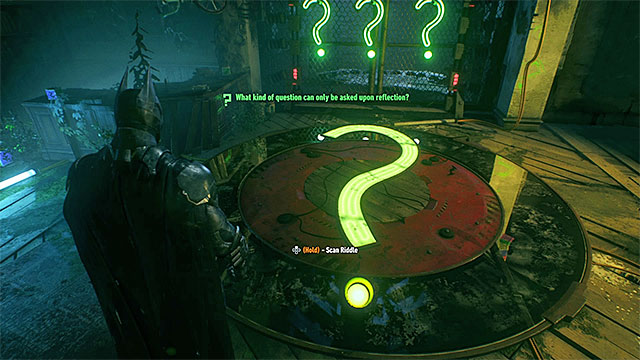 The third trail takes place in Pinkney Orphanage, i.e. where you have first met the Riddler and the Catwoman. After you get there, get out of the batmobile (you are not going to need it in this trial) and enter the building. You need to reach the room with the first puzzle to solve.

The puzzle here is about throwing the batarang at the green buttons, which will turn the circles in the flooring (each button corresponds to a different fragment of the floor). What you need to do is form a question mark this way (it should then go green), facing towards the green buttons. Stand in the spot shown in the above screenshot. To solve the word puzzle, you need to use the evidence scanner with the green question mark in front of you AND the reflection of the green lamp (the question mark's dot). Only after you have met these two requirements, scanning will be successful. 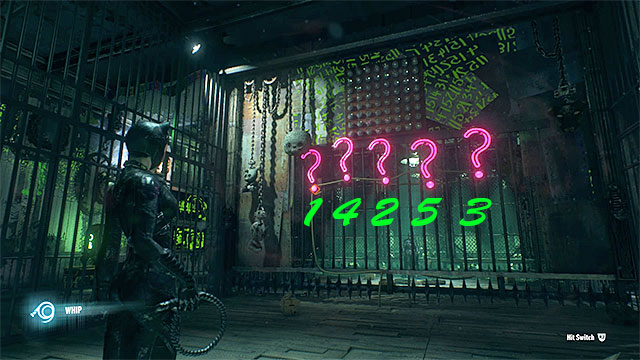 Talk to Catwoman and head towards the green door. In the next room, there is a puzzle to solve which requires cooperation from both of the characters. Start by walking onto the blue pressure plate, as Batman, and onto the pink one, as Catwoman.

As Batman, keep an eye on the figures that appear above the five question marks. They tell you the order in which you hit the buttons, BUT as Catwoman (not as Batman). Switch to her and start using the whip against the buttons, in the correct order. This has been shown in the above screenshot - start with button 1 and follow through to button 5. 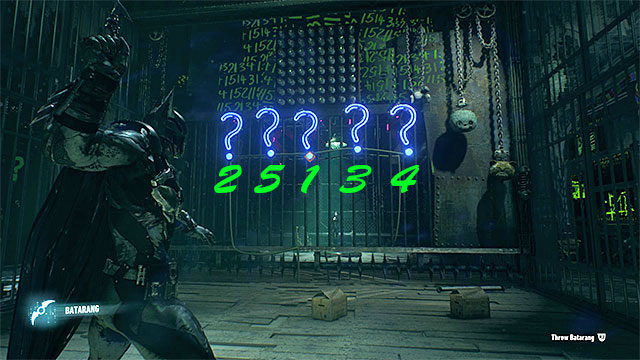 Repeat the above steps in the reverse order, now. As Catwoman, remember the digits that appear above the question marks, switch to Batman and throw the batarangs at them. The correct order has been presented in the above screenshot (start with 1 and follow through to 5).

At the end of the trial, there is a fight against 10 Riddler's henchmen. These are not too demanding and additionally, you can make things easier with team actions. Approach the shelf by the wall and collect the collar key. After you see a short cutscene, leave.