On this page of our guide to Batman: Arkham Knight you will find a walkthrough to the first trial set by the Riddler. It consists in winning a time trial race and solving a puzzle with keys. 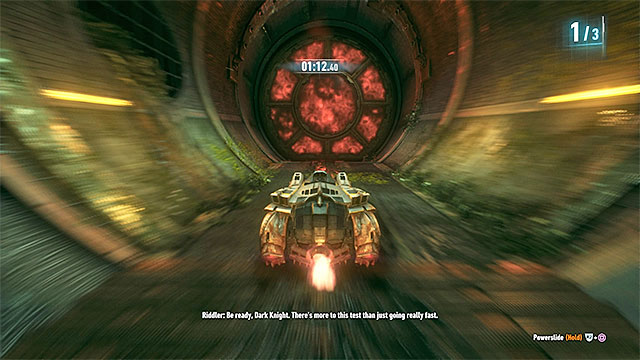 To complete the first Riddler trial, you will be predominantly using the batmobile. First of all, you need to complete three time trials, where you drive through Riddler's obstacle courses. Each trial starts immediately after you have finished the previous one so, you will not have a moment to catch your breath.

After you have listened to Riddler's first speech, test the Riddler Blockade, thanks to which you can manipulate the mechanisms left by him - the interactive platforms or the mechanisms. Stop by the blockades and wait for them to be lowered, which starts the first time trial. After you start, keep using the blockade to neutralize all of the obstacles in your way. Soon, you reach a fork, where you need to go left. 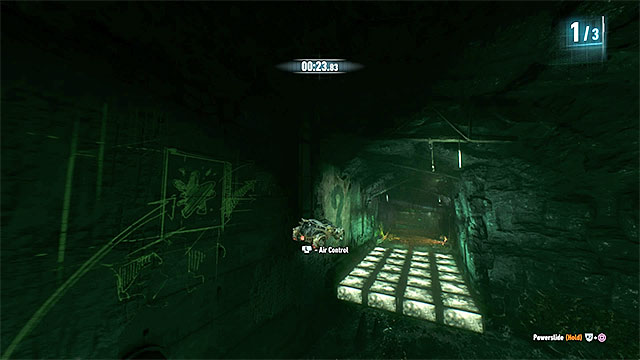 After each lap, you need to take a perfectly-timed long jump

Soon, you will have to deal with the more demanding obstacles. Use the blockade to extend the lower platform in the tunnel. In the next room, you will have to drive perfectly over the right wall and here, it is a good idea to use turbo charger, thanks to which you will not fall off the wall into the water. Towards the end of the route, use the blockade to form a big ramp. In here, activate the charge to ensure a proper jump. 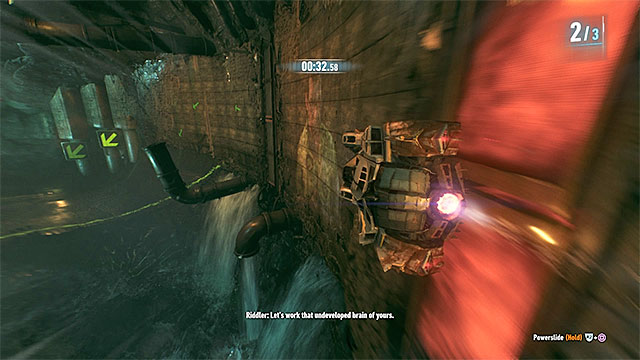 Lower the obstacle before you take another wall-drive

During the second "lap", you need to keep in mind that lowering some of the obstacles extend others. This may be a serious handicap so, try to activate the Riddler's blockade at the last moment possible. After you get to the fork, go right. Apart from the extending platforms, you also need to be careful while following narrower paths. Remove the obstacle before you drive over the right wall. Towards the end, extend the last platform to land on it, after a long jump. 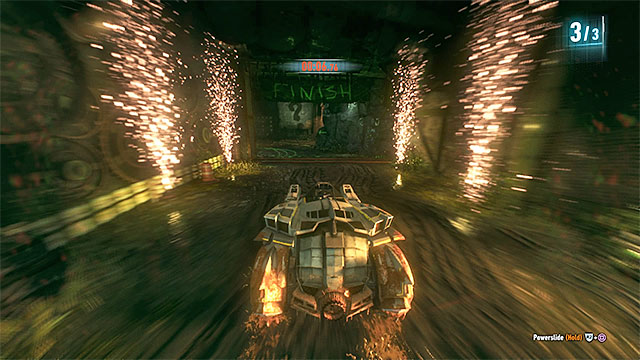 You need to reach the finishing line before time elapses

In the last, third, time trial there are even more obstacles, which are frequently placed next to each other. As I have suggested before, use the Riddler blockade at the last possible moment, thanks to which you avoid colliding with an obstacle, after you have interacted with the previous one.

At the fork, go left again and steer clear of water. Be careful while driving over the right wall, because there are two barricades there, now. Apart from that, make sure that you have extended the landing platform, towards the end. If you do not make too many mistakes, you reach the finishing line with 5-10 spare seconds. 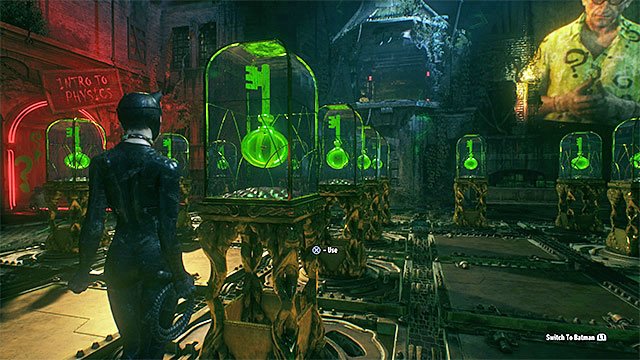 This is not the end, though, because in order to obtain the first key for Catwoman's collar, you still have to solve an additional puzzle. Get out of the batmobile, walk onto the pressure plate and take a look at the board with lit lamps on it. The most important one is the green one. You will be able to solve this puzzle after you have switched to Catwoman. On a sort of a game board, you need to find a capsule that corresponds to the one which you have earlier seen as Batman, on the board (organization of the objects on the game board corresponds to the organization of lamps on the wall). The location of the key has been presented in the above screenshot.

After Catwoman uses the key on her collar, cut back to Batman and leave. You can now take on the second trial.