On this page of our game guide to Batman: Arkham Knight we have prepared a description of Gotham on Fire side quest. Extinguish fires caused by Firefly (optional boss in the game).

You gain access to this mission relatively early into the game. After you have completed the Investigate the Crash Site main mission (where you search the site of the crash of the vehicle Oracle travelled on) Batman should ask Alfred for the current progress in searching the criminals. As a result, you learn, among others, about the blazing fire station. It is a good idea to take a closer look at that. 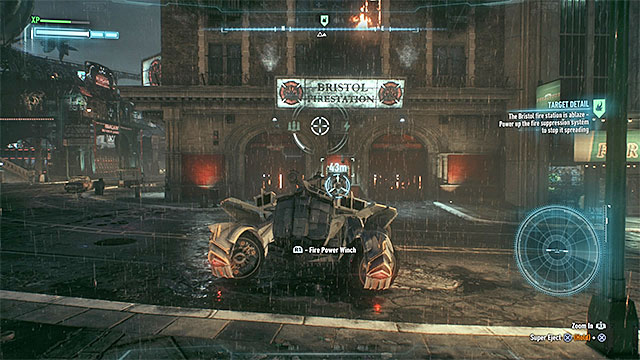 Use the hoist and put out the fire

The blazing fire station is located in Bristol and the best way to get there is o the batmobile, because you then need to use its hoist, after you get to the destination. Aim the hoist at the interactive catch and start revving up the engine of the batmobile. While doing that, make sure that the revolution meter of the vehicle stays within the orange area. Soon after you have started the fire safety mechanism, you learn that Firefly is the one responsible here. 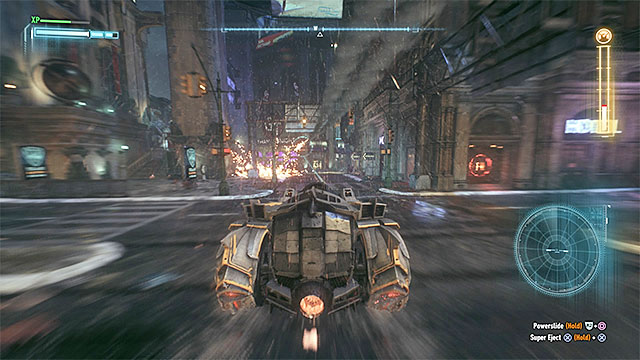 You need to follow the escaping Firefly on the batmobile. This is not too difficult, in spite of the fact that the opponent is dropping explosive and flaming traps onto the road. Keep within medium distance of the Firefly and remember to use brakes to enter tight, 90° turns . 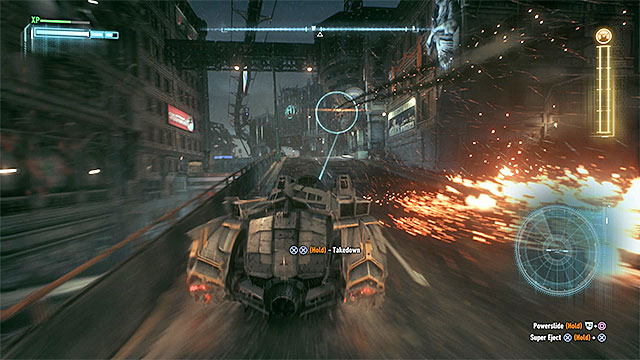 Eject Batman as soon as he gets sufficiently close to the Firefly (only after he runs out of fuel!)

Do not attempt laying any sort of fire on the Firefly, remain in the batmobile's pursuit mode. You need tor the opponent to run out of fuel in his jetpack (the meter in the upper-right corner of the screen). As soon as this happens, cut down the distance and wait for the message about the option to eject Batman and perform a special takedown in mid-air (double-tap the jump key/button).

If everything went according to the plan, Batman reaches Firefly automatically. The only thing you need to do now is use Beatdown, so you need to start tapping the melee key/button. After you land the sequence of blows, the Firefly breaks free and escapes. 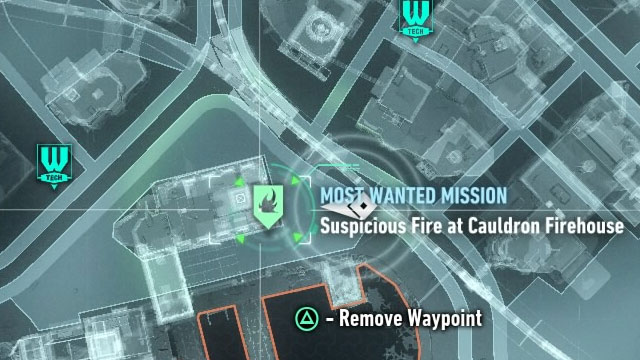 You now need to locate another fire station that has been set on fire by the Firefly. You can do this on your own, by reaching the top of any skyscraper and taking a look around for any black smoke, thanks to which you locate the building. If you do not want to lose your time, take a look at the above screenshot - another fire station is in Cauldron on Bleake Island. Just like before, use the hoist and put out the fire by managing the revolutions of the engine.

After a while, another chase after Firefly starts. The premises of this one are identical with the previous one. So, you need to avoid flames and wait for the opponent to run out of fuel. Then, eject Batman towards the criminal and beat him up. 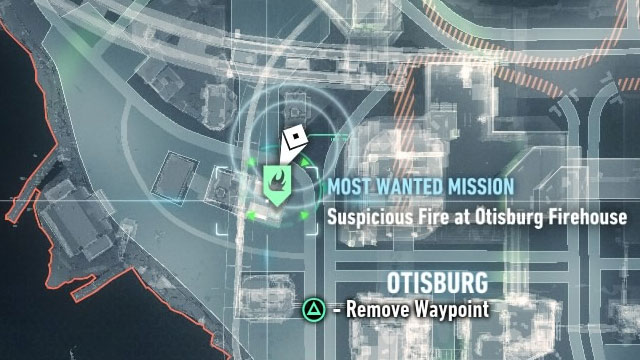 After the Firefly escapes again, locate the last, third, fire station. The location has been shown in the above screenshot - it is in Otisburg district on the Founders' Island. Put out the fire using the hoist of the batmobile.

You can now start the last pursuit after the Firefly. Capture him, after he runs out of fuel. This time around, the Firefly will not be able to escape. Instead, he is arrested and the mission ends.