On this page of our game guide to Batman: Arkham Knight we provide a detailed description of the fourth encounter with Arkham Knight. This duel consists of four stages - we have described all of them in detail.

Fourth encounter with Arkham Knight takes place soon after the third one, which was avoiding the drilling machine controlling by him. After returning to the abandoned shopping mall and trying to save commissioner Gordon (it's part of the main storyline), he will appear again and this time you will fight him directly, without using any additional machines. 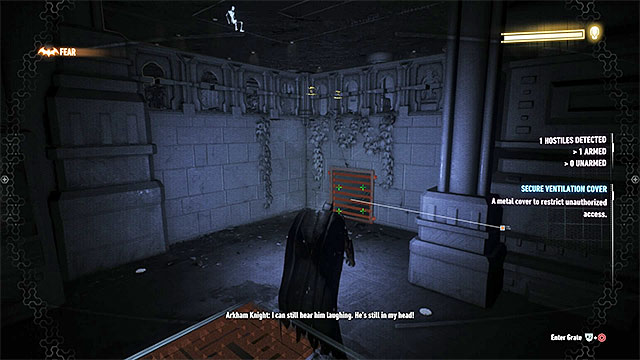 Use the ventilation shaft to safely get close to the boss

The duel with Arkham Knight consists of four phases. Your main objective in each of them is reaching the observation point occupied by your opponent without being spotted (he has a sniper rifle with which he observes his surroundings.

Start with activating the detective mode and examining the territory. You can't jump to any observation points that are nearby the Arkham Knight and you can't walk to him traditionally as he observes his surroundings and you could be easily targeted by him. Instead, get to the lowest level of the main room and look for the entrance to the ventilation shaft that leads to the boss. 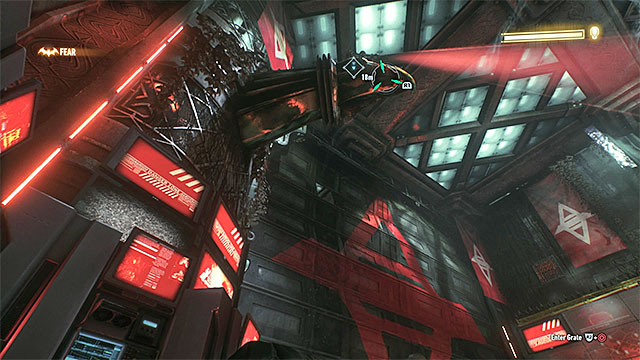 You must get under the ledge occupied by Arkham Knight

Walk through the ventilation shaft and use the exit under the Arkham Knight - it will allow you to get through the territory observed by him. Look at the ledge on which the opponent is hiding and pull yourself there with the grappling hook. Batman will deal some damage to the Arkham Knight and the second phase of the duel will start. 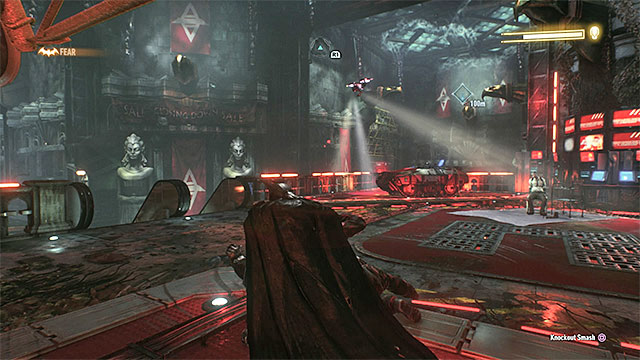 You can temporary blind the flying drone, but most of the time it is better to avoid the machine

In this phase of the duel Arkham Knight will summon five bandits to his aid and will take control of a flying drone. Since the drone is related to the boss, you can't eliminate it completely. If left with no other choice, help yourself with the remote hacking device to temporary blind the drone, in all other situations simply avoid the territory in which the machine can be found (luckily, it moves very slowly).

As for the enemies, don't rush with attacking them, use the gadgets and the surroundings for your advantage. For example, you can attack them from the ventilation shafts, sneak up on them from behind, lure them away with voice synthesizer or stun them by spraying the explosive gel on weakened walls. Important - use the detective mode cautiously as one of your enemies has a device that can detect it. 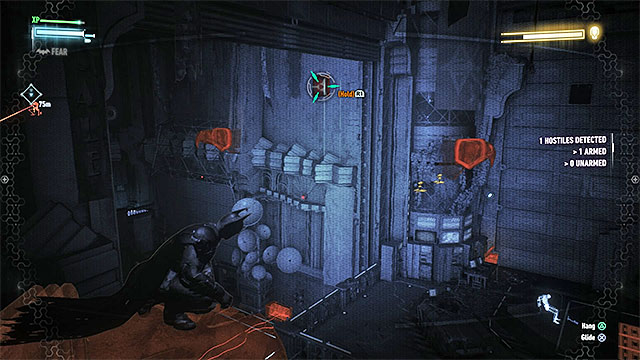 Focus on Arkham Knight after you take care of his allies. Just as before, it is best to get close to the boss through the ventilation shafts. Look nearby him for a vent leading to a vertical shaft and get inside by using the grappling hook. Then, use the ventilation tunnels to get under Arkham Knight. Just as during the first phase, use the grappling hook on the ledge occupied by the boss. 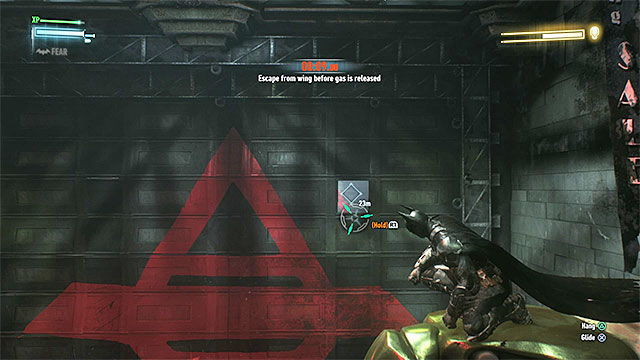 Third phase of the duel starts with a time limited challenge. You must escape a room with poison gas in less than 30 seconds. Use detective mode to find the vent on the wall shown on the picture above and pull yourself to it with the grappling hook. 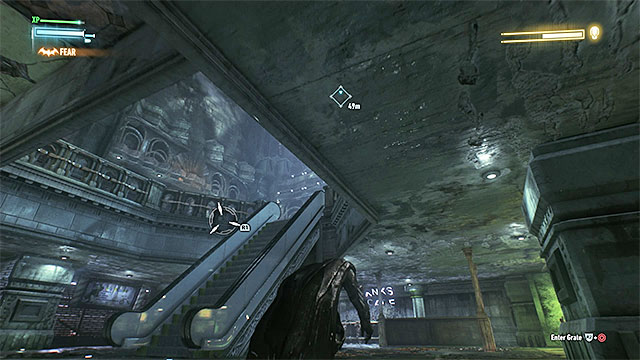 In this part of the duel Arkham Knight is accompanied by six new bandits. Additionally, you must once more watch out for his flying drone. This time enemies aren't detected nor marked in different color in the detective mode. Despite that, you shouldn't have trouble with finding and eliminating them.

As previously, focus on Arkham Knight only after you take care of his backup. Use the ventilation shafts to get close to the moving stairway. Use the grappling hook to get to the higher level when the boss will look the other side. Quickly target the ledge with the Arkham Knight before he will spot you. 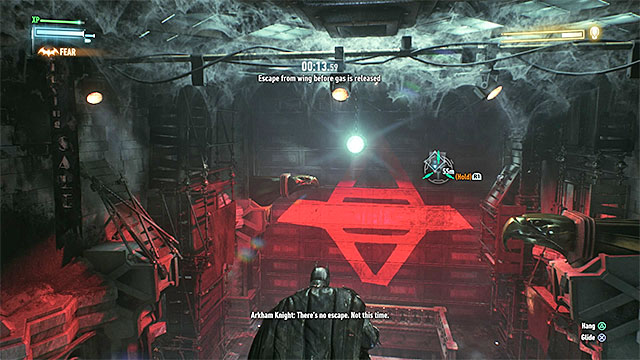 Use the grappling hook to get out of the trap

Similarly to phase three, first you must escape the room with poison gas. This time you have only 15 seconds. The bars on the wall can be spotted ahead from the place where you start. 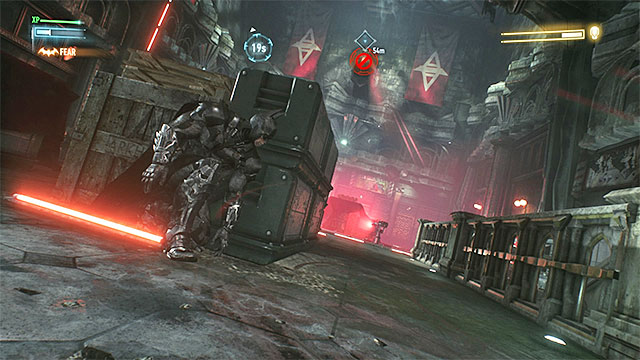 Hide behind the chests near the stairs

In this phase Arkham Knight will no longer have bandits to help him. Instead, two defense turrets will be placed near his position. Additionally, this time you can't use the ventilation shafts to get close to the boss.

Start on the lowest level and slowly go towards the inactive moving stairway leading to the boss. Before you use the stairs, you must perform two actions. First, blind the flying drone for 30 seconds with the remote hacking device. Second, make sure that Arkham Knight isn't currently looking at the stairs. Once you get to the higher level, hide behind the nearest chest. 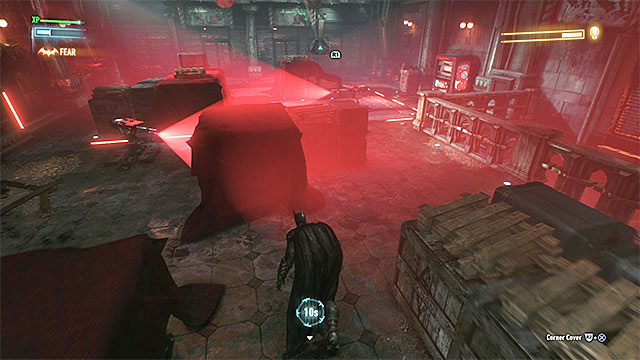 Pick the path shown on the picture above, it will allow you to get close to both defense turrets without being spotted. As before, leave the hideout once Arkham Knight will start observing the territory to the left or right from that place. 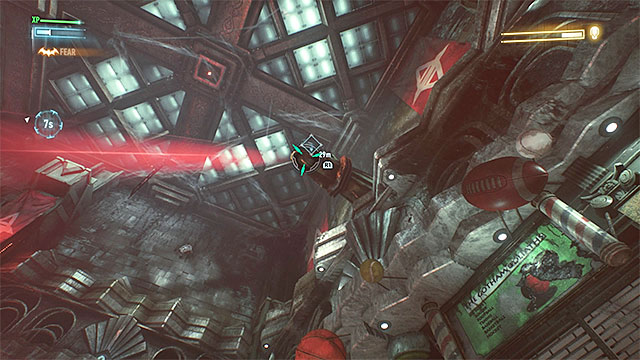 When it is safe, pull yourself to the ledge

Position yourself near the new chest, quickly select the remote hacking device and use it to temporary deactivate the right defense turret. Now you have fifteen seconds to get to the ledge with Arkham Knight. Do it once he turns left or right. Additionally, you must check the current position of the left turret and wait until it turns the other side. If you want, you can even run towards the ledge to reduce the time when you're vulnerable. Pull yourself to the ledge and let Batman take care of Arkham Knight.