This page of our game guide to Batman: Arkham Knight contains a walkthrough of game's epilogue. Joker plays an important role here as he will haunt Batman. 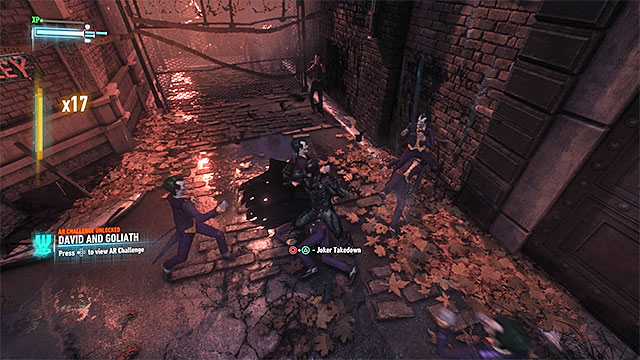 Use unique takedowns on Jokers

Soon you will face the first of a series of consciousness disorders. When you find yourself in an empty alley, walk along the path. Climb in order to bypass a gate. Once you reach the closed territory, first check the side doors and then walk to the corpses of Bruce Wayne parents. Soon Joker "clones" will start appearing nearby. Attack them and use counters. As the multiplier increases, you will be able to activate the Joker takedown. Use it as frequently as possible, after few tries you will be able to catch the "real" Joker with it. Start pressing the attack key/button to try to strangle the Joker. It will trigger a long cutscene. 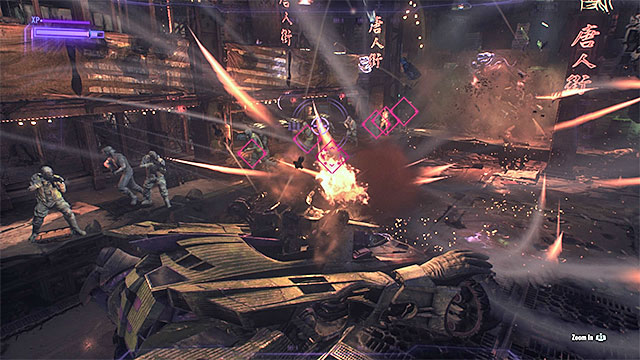 Start by using the Joker's vehicle to eliminate the opponents positioned nearby. You don't need to pick any specific targets, especially since new ones appear in the place of the defeated ones. Keep shooting until you will be able to activate the special attack (The Killing Joke) which is Joker's version of suppressive fire.

When you take direct control of the Joker, use the small exit from the room. Kill all enemies met on your way - The Penguin, the Riddler with the hostage sergeant Hanrahan and Two-Face. Once you leave the building, a new cutscene will start. 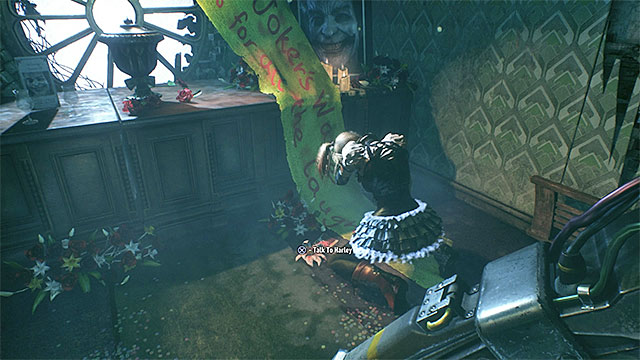 An altar can be found in one of the visited locations

Once you regain control of the Joker, start by activating the flashlight. Explore the catacomb-like location. Stop in each room where there's a cutscene to watch or Joker's commentary to hear. On the way, use the weapon to destroy Batman's statue. Walk to the altar and try to talk with Harley Quinn. Destroy the chairs to unlock access to the side corridor. Now stop near the desk with radio turned on.

Soon you will reach a larger room with new Batman statue. Destroy it and new ones will appear. Keep destroying the monuments until the Batman himself arrives. Use the weapon to destroy part of the weakened wall and move on. Reach the interactive button and try to push it on. When Batman shows again, shoot at him few times. It will lead to a direct confrontation between the two characters. 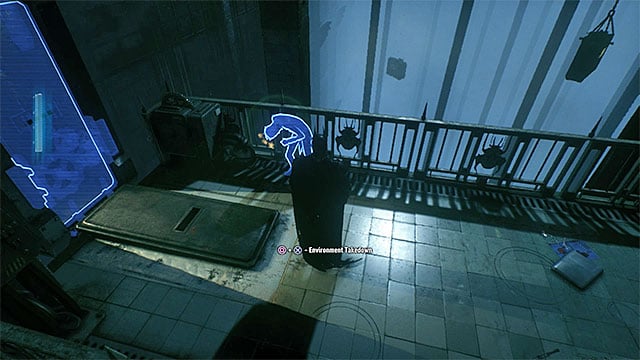 Once you take control of Batman, focus on attacking Joker who will be basically helpless. You must get him close to the cell from which Batman walked out previously and activate the special environmental takedown (the picture above). It will imprison the Joker in the cell. Now all that's left is to watch a new cutscene.

Important! It's the end of the basic part of the main storyline, but there are two additional endings to be unlocked. In order to gain access to those endings you must complete a specific amount of side quests (Most Wanted) related to capturing other villains in Gotham. More detailed information about it can be found in the next chapter of this guide.

Important! New Story+ mode becomes available from now. It allows you to start the game again on higher difficulty level. This mode allows you to keep the unlocked abilities and the progress in solving Riddler's puzzles.