On this page of our game guide to Batman: Arkham Knight we explain how to defend the Gotham City Police Department. Our walkthrough depicts how to use Batmobile and defeat groups of elite enemies in this complex task. 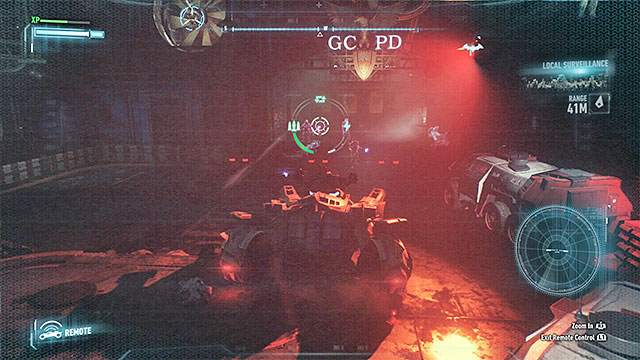 Go to the underground parking lot where you have earlier left the Batmobile. Once you get there, two transporters with large amounts of bandits will arrive. Direct combat with Scarecrow's men is unadvised because you would have to deal with limited visibility and be cautious when attacking enemies with tasers and shields. A much better idea is to use the grappling hook to reach one of the upper balconies in the underground parking lot. Position yourself in a place where enemies won't be able to shoot you. Then, activate the Batmobile remote control and use the car to eliminate your opponents. Use the Batmobile to eliminate the second wave of enemies as well (it is possible that you will have to walk down for a moment to "encourage" your opponents to get into vehicle's range). 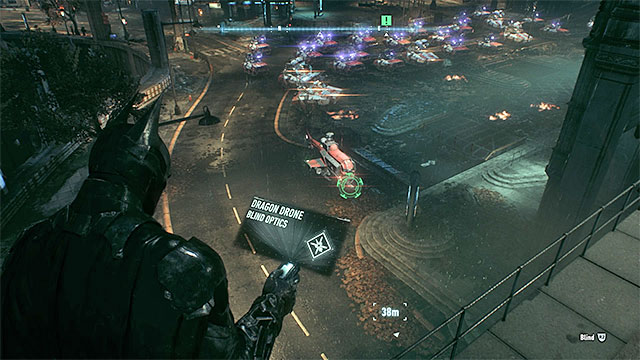 Ignore the tanks positioned around the Police Department and don't worry that the main generator has been destroyed - it cannot be prevented. Go to the gate leading to the underground parking. Currently it is observed by a flying machine, so you must use the remote hacking device to temporary blind it. Then walk through the narrow hole near the destroyed enemy tank. 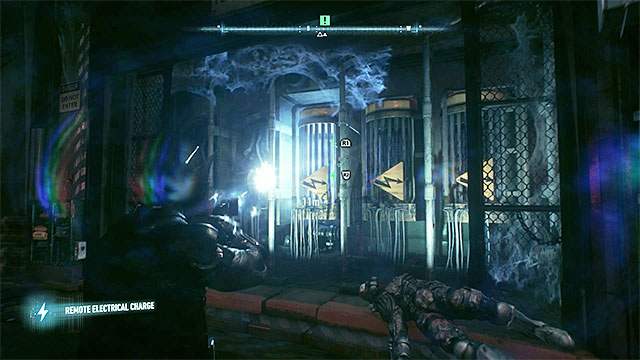 Load the generators with the remote electric charge

Get close to the new group of enemies whom you must defeat without the help of your vehicle. Watch out especially for enemies with tasers and for elite enemies with shields. Use electric charge, cape stun and stomp against them. Once the battle is won, get close to three backup generators. Use electric charge to power them up. Now you can summon the Batmobile and go to the exit from the underground parking.

Important - before you drive to the surface, invest available development points into upgrading the Batmobile. The hardest battle in the vehicle awaits you. 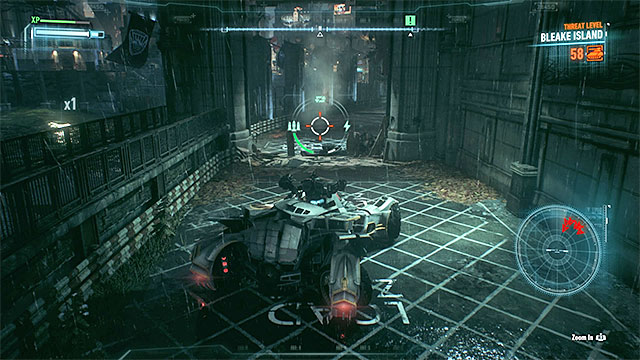 The battles will start once you leave the underground parking. Winning will be hard because you will have to destroy more than 60 (!) enemy machines. What's more, you won't be able to regenerate Batmobile's energy, so you must keep it on a reasonable level since the very beginning of the combat.

After leaving the underground parking, destroy two closest flying drones. Then, consider getting through the barricade located on the left side and shown on the picture above. It would allow you to get to the back of the Police Department. If you do it, enemies will have to use narrow passages to get to you (the passage where you have destroyed the barricade and the one on the other side of the building). Thanks to that, you won't find yourself under a massive attack of enemy forces. 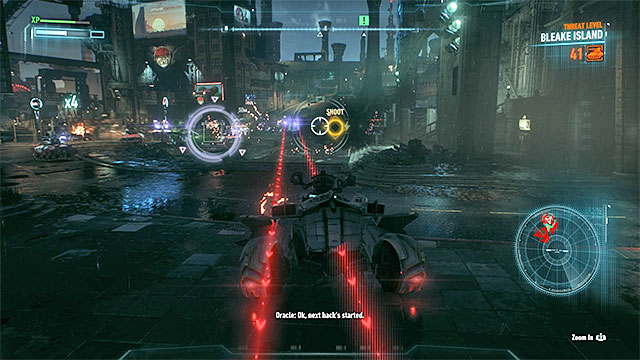 Look around for violet and yellow icons, hitting the machines marked with them will make it much easier for you to win

Depending on how the battle goes, you can remain on the back of the Police Department, go back near the parking (main enemy forces can be found there) or travel through the whole island without stopping in any specific territory. No matter how you act, focus mostly on destroying the flying drones and shooting down the rockets flying at the Batmobile.

Oracle will help you in effective destroying tanks and flying machines. Keep attention to enemy machines marked by her and try to focus your fire on them. Violet color means that once you hit that enemy an EMP charge will be shot around it - it will temporary immobilize nearby units. Yellow color means that hitting enemy vehicle will make him explode. Additionally, use all the special equipment of the Batmobile, such as drone hacker and suppressive fire. Leave the armored tanks for the last part of the battle. Attack them from long distance and avoid their heavy fire by hiding behind building's walls. 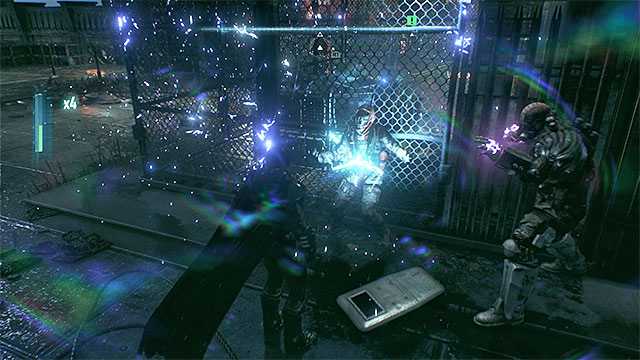 Depend on team attacks performed together with the Oracle

Destroying all enemy vehicles won't finish the siege on the Police Department - new enemies will appear on the roof and you will have to stop them from sabotaging the building's security systems. Before you go to them, check if you can buy some upgrades that will improve Batman's resistance and melee combat abilities.

Once the battle starts, focus mostly on taking care of enemies with tasers and shields. Also, be prepared for another group of bandits that will soon reach the roof on a flying machine. Among the new group you will find some martial arts experts, so you will have to perform counterattacks with even greater precision. You will get a small facilitation from Oracle with whom you will be able to sometimes activate team attacks (throwing the enemy on the electric fence or on pipes with hot steam). As these attacks are strictly limited, try to use them only on the strongest opponents. 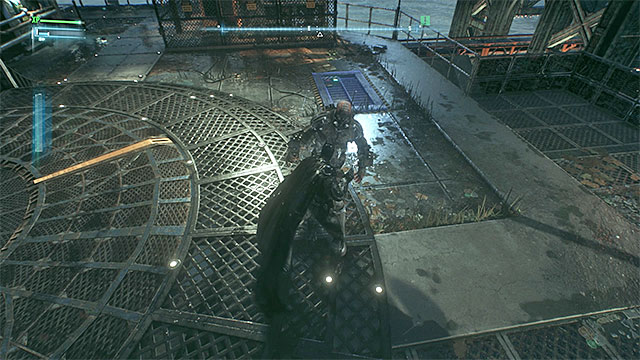 There will be another group of bandits, this time commanded by two elite opponents in heavy armors. You must attack them in a specific way. First you must stomp on them (cape stun and then pressing the jump key/button twice) and then, once the opponent is stunned, activate the beat down. Try to plan the attacks so that other bandits won't interrupt you in finishing their leaders - stop their attacks with counters and then continue the combo that is part of the beat down. Keep fighting until you secure the roof (if you die, you won't start the battle from the beginning but from the moment when the last group of enemies appeared).