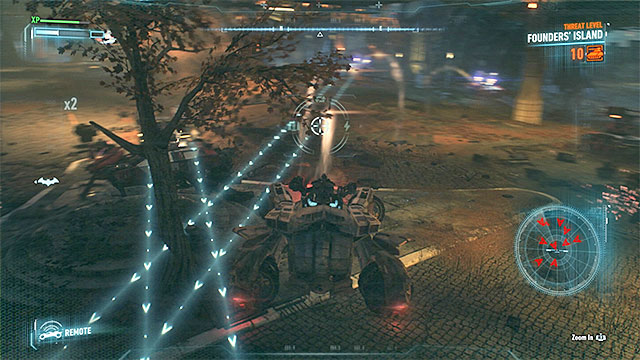 Press the key/button responsible for summoning the "replacement" Batmobile and start attacking the enemy tanks that are positioned around the abandoned shopping mall. During the battle you can't get too far away from Batman and the Oracle, so you will have to use the dodge control engines of the vehicle more frequently that usually.

You should start the battle with activating the fully developed suppressive fire which allows you to fire ten missiles. Look for opportunities to use this part of the equipment later in the battle as well. As for the enemy vehicles, focus mostly on destroying the tanks that are able to fire rockets at Batmobile. Use Vulcan cannon to destroy those rockets. You must destroy around two dozens of enemy machines. Once you do it, move Barbara to the Batmobile and drive her to the Gotham City Police Department.