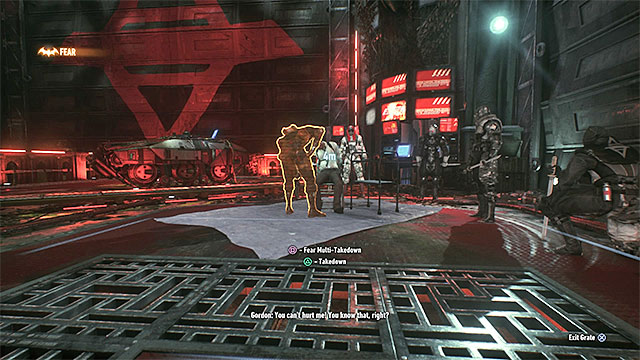 Don't try to jump down to the destroyed Batmobile. Instead, look up and pull yourself to the higher ledge with the grappling hook. Start walking through the narrow corridors. They will lead you to the ventilation shafts. Use them to reach the large room in which the commissioner Gordon is imprisoned.

There are many enemies around Gordon and it is a good idea to take them by surprise. To do it, start the battle with a fear takedown. During the combat, try to quickly stun the medics and don't let your opponents pick up gunfire. Once the fight is over, try to free commissioner Gordon. Arkham Knight will appear on the scene. You will learn his true identity and finally will have an opportunity to fight him without the backup of any vehicles.