On this page of our game guide to Batman: Arkham Knight we explain how to find commissioner Gordon in the shopping mall. This is a vast and large location where you have to solve a lot of riddles. Many of them have to be solved in the Batmobile. 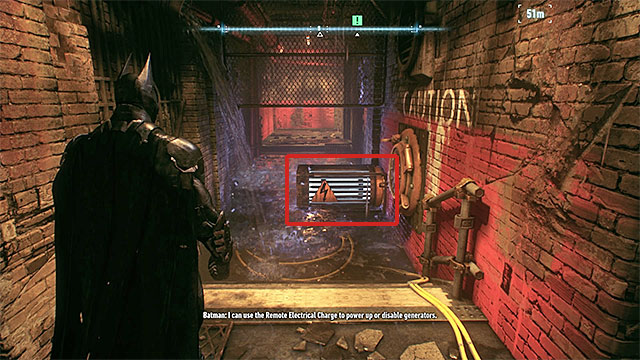 You must use the remote electrical charge to deactivate the generator

Leave the police department and go to the abandoned shopping mall that can be found near the Ryker Heights district. Be careful as you will probably have to destroy some enemy tanks groups on your way (luckily, there won't be any Cobras among them).

Stop near the shopping mall. Access inside will be blocked by shutters. Use the detective mode to find an interactive hatch leading to the sewers. In the sewers, stop at the place where electrical lightning can be seen. Select the electrical charge from the inventory and shoot it at the generator. It will turn it off (there are two charge types so pick the correct one). Walk through the water and, once you get to the other side, use the electrical charge again to reactivate the generator and reopen the gate. 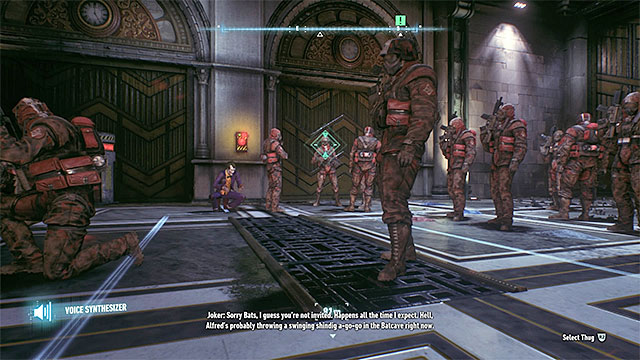 Shutters can be spread by using the voice synthesizer

Hang on the ventilation shaft with the grappling hook and reach the main room where you will find large amounts of armed bandits. Luckily, you won't have to fight them. Pick the voice synthesizer and order one of the enemies to push the button responsible for spreading the shutters. Now use the Batmobile remote control and eliminate all enemies with your vehicle. Leave the ventilation shaft once you secure the territory.

Find the fuse box and, after interacting with it, walk to the elevator shaft. Now you will have to perform a series of complicated activities which will end in reaching the bottom of the shaft. 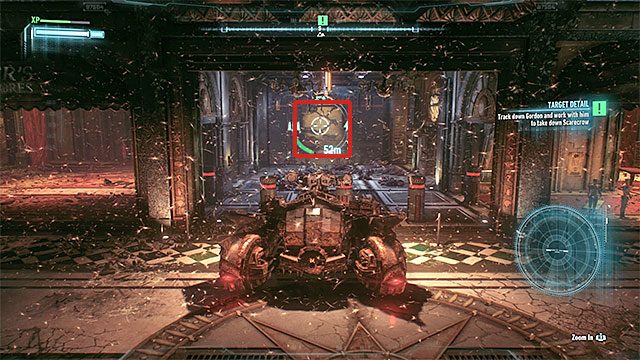 Aim the Batmobile at the weakened wall

Your first task in the large shaft is deactivating the first of two huge ventilators. Activate the remote Batmobile control and stop the vehicle in such position that you will see the unlocked elevator shaft. Use the 60mm cannon in order to destroy the large wall in the glass. Go back to controlling Batman and use the grappling hook to reach the newly unlocked ledge. There you will find a fuse box. Breaking in it will lower the blockades that made it impossible for the Batmobile to drive into the shopping center. 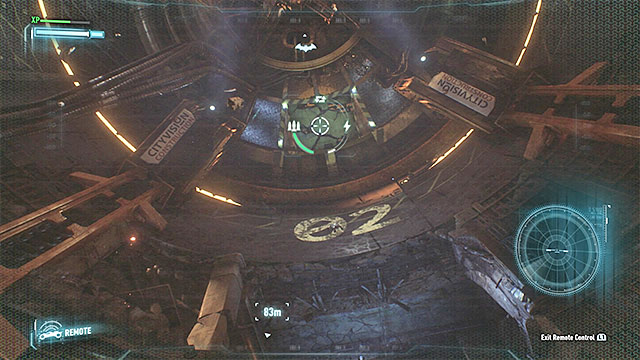 Again use the Batmobile remote control. Drive the vehicle to the building and look around for the interactive hook on the ceiling. Use the windlass on it. You shouldn't pull out the hook. Instead, you should use it to safely lower the Batmobile in the shaft. Once you get the vehicle to the shaft, target another weakened wall that has been shown on the picture above. It's on the highest level of the elevator shaft. 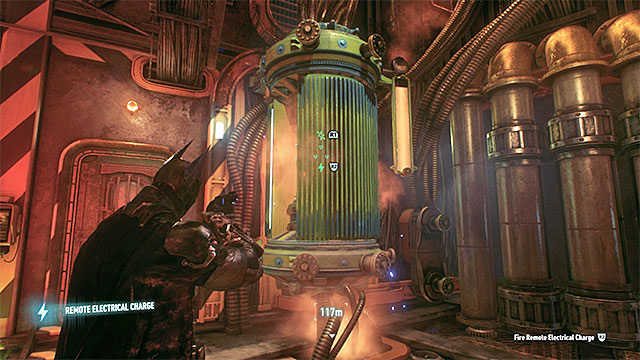 Load the generator with electric charges in order to overload it

Now you can again take control of the main character and use the grappling hook to get to the platform unlocked by destroying the weakened wall. Once you get there, pick the electric charge and aim at the generator that can be found there. You must send impulses that will load the generator with additional energy (don't try to turn the generator off!). It will lead to overloading it. The generator will explode and due to that action first of two large fans will deactivate. 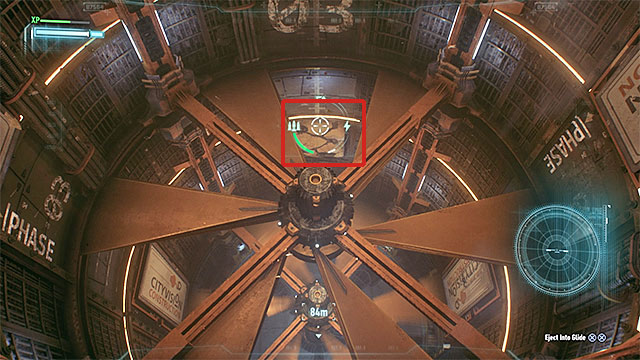 Go back to controlling the Batmobile that should still be hanging in the shaft. Lower it slightly down and aim at the new weakened wall that can be found below the first deactivated fan (on third shaft level). Use the 60mm cannon to destroy it, wait until some enemies appear there and attack them as well. Then, use the grappling hook and gliding to reach the new hole as Batman. There you must find the upper ledge to which you can get by using the grappling hook. There you will find a small elevator that is out of order. 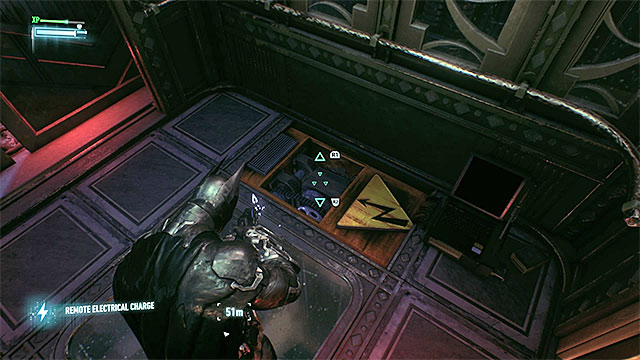 Move the elevator with electric charge

Pick the electric charge from the inventory and target the elevator generator in order to activate it. Your objective is to get the elevator reach the place from which you can spray the explosive gel on the weakened wall.

Use the new entrance to reach the room where you will face enemies with tasers for the first time. As the game hints you, the only way to stun them in "harmless" way is by using the electric charge. Each stunned enemy can be then easily finished. Once the battles end, use the nearby switch that unlocks access to the main shaft. 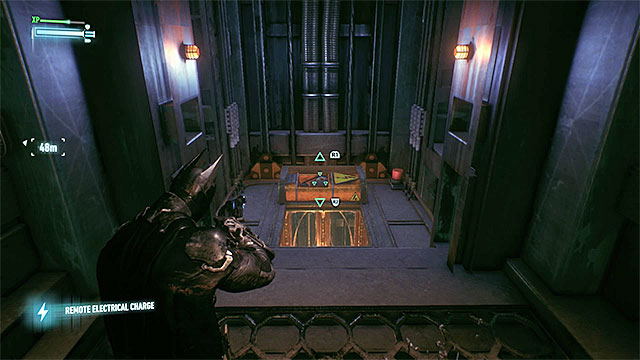 Once you get to the side shelf, send the elevator up

Temporary ignore the main shaft and go to the eastern corridor. Use the grappling hook and get to the place where four bandits can be found. You don't have to eliminate enemies in the conventional way, you can send an electric charge to the nearby generator and electrocute them instead. Reach the new switch and then walk into another inactive elevator. As before, start with getting it as far below as possible with the electric charge.

Notice that you can climb on the side ledge. After lowering the elevator, aim at the elevator from distance and use the electric charge to send it back up. Now you can jump back to the shaft and find the ventilation hatch in its lower part. 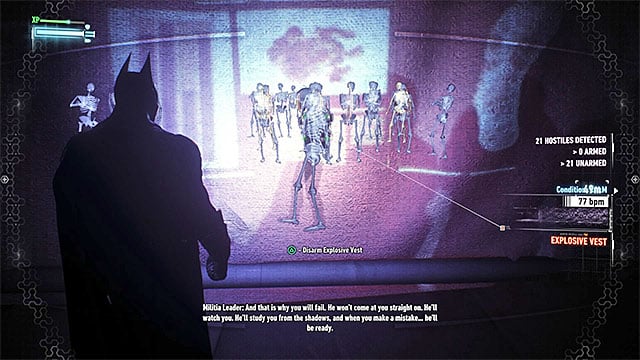 Many bandits can be found in the new room. You can't attack them until you take care of their leader that has a bomb on him. Move through the upper ledges until you get to the back of the stage. Only after that you should jump down. Walk towards the screen and, once you position yourself precisely behind bandits' leader, press the takedown button/key. It will allow you to disarm the bomb and, obviously, will start another battle. During the battle you must especially watch out for another group of enemies with tasers. Use electric charge on them in order to avoid unnecessary damage. Additionally, similarly to other battles, try to stun two medics as quickly as possible. Once the battle is over, find the fuse box and enter the new corridor. 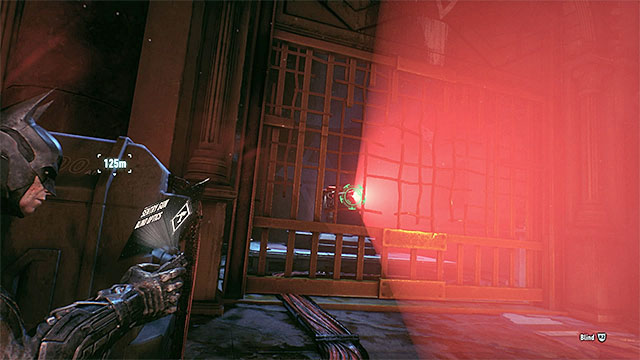 Once you win the battle, find the fuse box and enter the new corridor. Soon you will reach the lowest level of the main shaft. While still controlling Batman, check the western corridor. There's an active defense turret there, so you must hide behind the cover and temporary deactivate it with the remote hacking device. Quickly go to the smaller shaft, look up and use the grappling hook to reach the room on the higher floor. A generator can be found there that is powering the second fan. Just as before, you must overload the generator and make it explode. To do it, you need the electric charge. 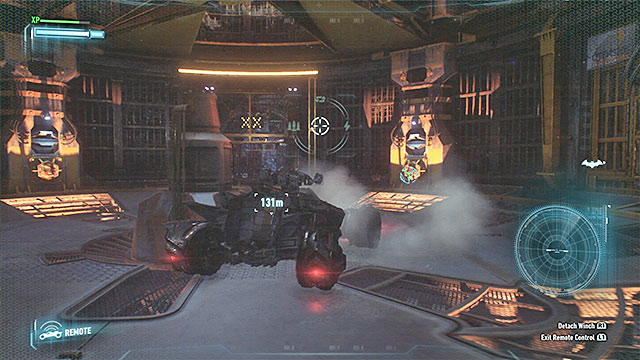 Don't try to go back to the small elevator shaft, you wouldn't have enough time to hack the turret again. Remain in the room with the destroyed generator and activate the Batmobile remote control. Use the fact that the second fan is inactive and resume the process of lowering the car hanged on the winch to the upper hook. You must get the vehicle to the bottom. Once you reach the large platform, unhook the winch.

Now target one of the side hooks and turn the reverse gear. You must gradually lower the large platform. Keep doing it until it reaches the bottom. Now you can ride into the corridor with the defense turret and use the Batmobile to destroy it. Switch to Batman and go back to the large shaft. 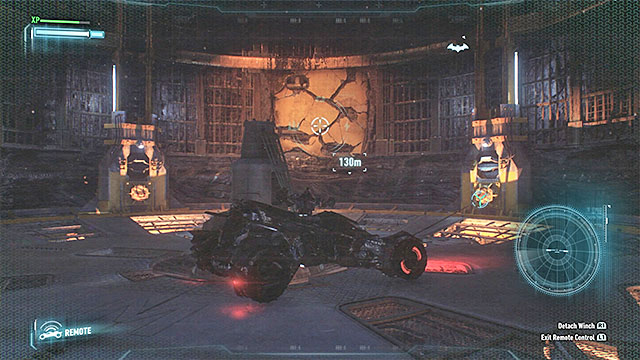 Use your vehicle to destroy the weakened wall that can be found slightly above. Once again you must use the winch on one of the hooks. However, this time you must position yourself in a way so that the large platform will start slowly rise. Your objective is to allow the Batmobile to ride through the hole created after destroying the weakened wall. It will let you reach the drilled tunnels. Listen to the conversation with Alfred, use the fuse box and enter the tunnels. Soon you will have to once more face Arkham Knight who took control of a large drilling machine.