On this page of our game guide to Batman: Arkham Knight we explain how to destroy the Cloudburst tank controlled by Arkham Knight. You will get to know how to target the tank and totally smash it into pieces.

Important! This is a long and hard battle in which you control the Batmobile. If possible, before starting it, unlock as many vehicle upgrades as possible, it will increase your victory chances. 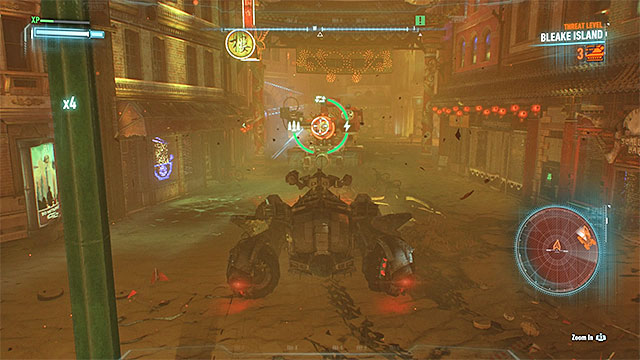 Start driving in the Batmobile towards the Bleake Island. After driving through one of the bridges that lead there let Batman contact Alfred. On this island a new large battle will take place. During it you won't be able to leave the location.

Seven enemy vehicles can be found there - six Cobra tanks and one Cloudburst tank. First you should focus only on Cobra tanks and on avoiding the machine controlled by Arkham Knight. Bleake Island is quite large, so you can carefully plan your next moves (observe the mini-map). Wait for one of the tanks to get away from the others, drive to its back and shoot a rocket into its exhaust. Repeat this tactic until only the Cloudburst tank remains on the map. 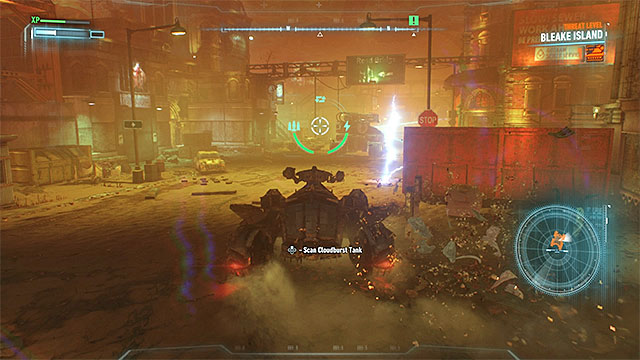 Drive to Arkham Knight's vehicle and scan it

Your next task is to scan the Cloudburst tank in order to find its potential weaknesses. The machine is by default moving slowly, but the fact that it is constantly scanning the territory around it is quite an obstacle. You can use the pursuit mode to quickly drive to Arkham Knight's vehicle or, while getting close, hide behind buildings and other obstacles to avoid being detected. Hold the scan button/key. You will learn that four cooling systems are the tank's weak points. 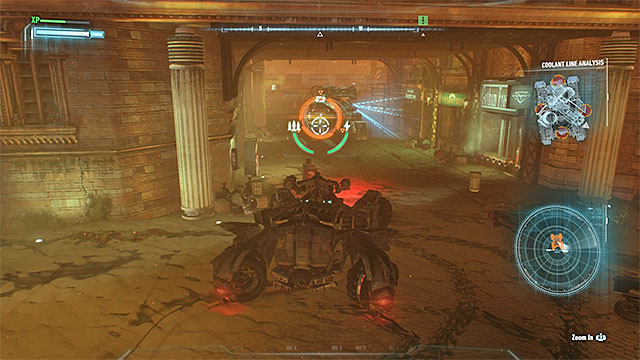 Target the cooling systems and destroy them

A very hard part of the battle is ahead of you. You must perform four successful attacks on Cloudburst tank without the possibility to regenerate Batmobile armor in the meantime. Each time, start with driving close enough to the tank to start the targeting process. Once it is done, use the 60mm cannon. 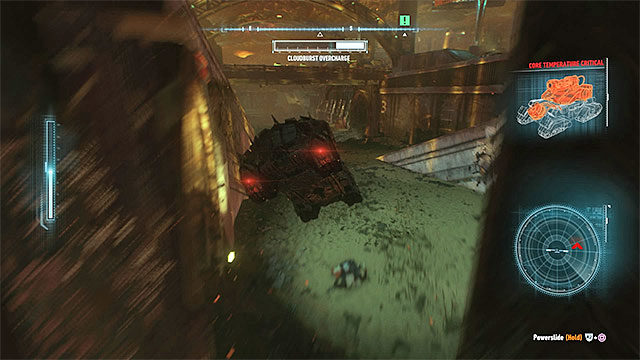 During the escape, don't stop and avoid the fire from the "overloaded" tank

JUST AFTER you shoot the missile, go back to pursuit mode and start escaping in the Batmobile. The Cloudburst tank will activate the Overload mode and will chase you. Don't stop until the system overload bar of enemy tank visible on the screen depletes. Help yourself with the afterburner and avoid dead ends where you won't be able to continue the escape. During the chase you must also watch out for rockets shot by enemy tank. Try to avoid the red circles appearing on the ground.

You must repeat all activities described above three times, each time aiming at different part of the cooling system. It will allow you to get to the final phase of the battle. 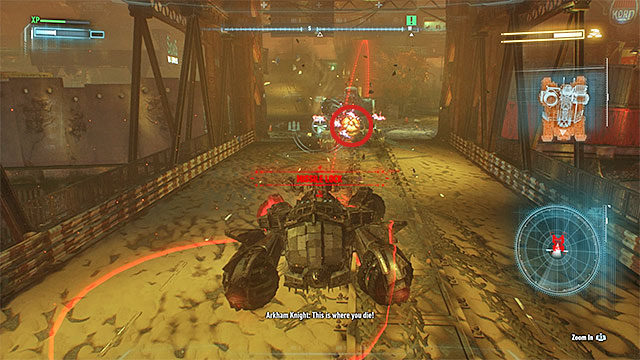 Final part of the duel with Arkham Knight is also very challenging. This time you won't need to hide because you will no longer aim at any Cloudburst tank weakpoints. Instead, you will attack its central mechanism which has been marked on the picture above. Before you start attacking enemy vehicle, wait until it appears on one of the island's main streets - it is very important to have a large area of operation. Position yourself quite far from the tank and start attacking its "core" with 60mm cannon. Of course, enemy won't be helpless. Most of all, avoid its missiles by dodging the red circles appearing on the ground. Additionally, use Vulcan cannon to destroy the rockets shot at Batmobile.

The Cloudburst tank will be destroyed after more or less a dozen of precise hits. Good news is that if you fail, you will return to the checkpoint after destroying the cooling system (so you won't have to restart the whole battle from the start). Wait until Batman starts fighting with Arkham Knight and press the close combat attack button/key in order to defeat the adversary.