On this page of our game guide to Batman: Arkham Knight we explain how to protect Poison Ivy and her plants. During this task you have to destroy various enemies like tanks or drones. 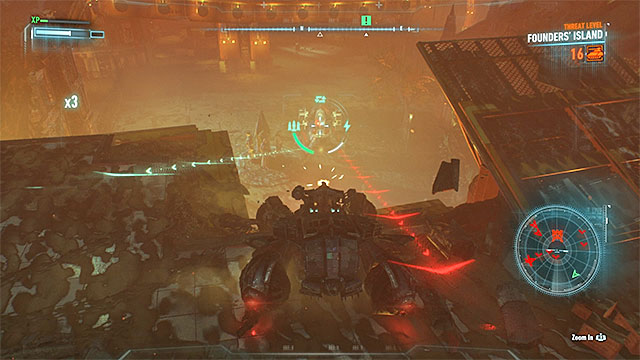 Try to first eliminate those enemies that are a greater threat

A new battle awaits you, this one even harder than the previous one in the port. While fighting, you must stay close to the church and eliminate great amounts of tanks and flying machines.

Once the battle starts, you should use the ramps in order to get to higher levels. From there, it will be easier to control enemy forces' actions. Use the engines responsible for dodges as often as possible - you will have to survive the whole battle on Batmobile's energy without the possibility to regenerate it. Try to focus on destroying the flying drones and those tanks that in addition to the regular fire can shoot rockets at Batman. As always, you should remember about activating additional vehicle car equipment, such as drone hacker which you can use to convince stronger tanks to join your side. There are around forty machines to destroy in total. Once the battle is won, listen to the conversation with Arkham Knight and Poison Ivy.