On this page of our game guide to Batman: Arkham Knight we explain how to stop the enemies attacking the Botanical Gardens. Our guide provides a set of hints and tips regarding this rather complicated stage with Batmobile. 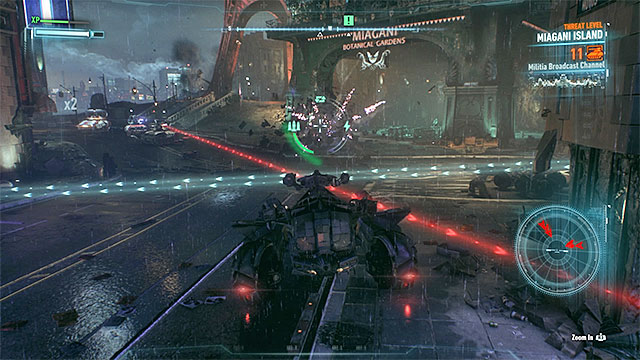 Use dodges to prevent the Batmobile from destruction

Now you have to take part in a long and rather demanding fight, in which you have to eliminate waves of enemy military forces appearing near the Botanical Gardens, where the Poison Ivy resides. Initially, these are usual tanks - nearly 20 of them. While fighting against these machines keep using the dodge engines. Besides, you can use the Drone Hacker (hack single machines to fight for your side) and EMP charge (temporarily stuns tanks).

The second part of the battle is equally demanding, as it puts you up against several Cobra tanks. You have to plan your attacks, targeted their rear, very carefully (fortunately, you do not have to hurry), as their routs often cross and in effect the Batmobile may suddenly be caught up in their fire range. When you win the two fights, go (on foot) to the large plant marked on the map and talk to Poison Ivy. At this point, an important cut-scene will launch.