On this page of our game guide to Batman: Arkham Knight you can find a description which explains how to apprehend Johnny Charisma. He resides in scene C of the movie studios. Also, we provide a solution to the exploding bombs puzzle. 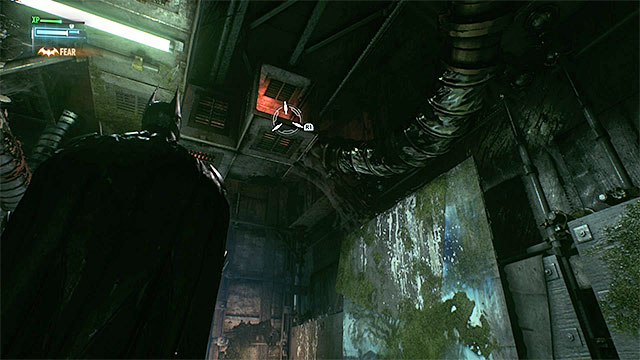 Entrance to the vent shaft is well hidden

There is only sound stage C left to investigate. Take the northern corridor in the central hall, which turns east a little bit farther. The nearby corridor is guarded by a bandit with a minigun, whom you should trick too. Look around in the adjacent corridor, behind the vent on the ceiling. Get up there using the Grappling Hook and walk through the shaft until you get to a small room on the side, next to a weak wall.

Apply Explosive Gel on the wall. Then select the Voice Synthesizer from the inventory. Aim at the enemy with a minigun and command him with Harley Quinn's voice to check out the weak wall. As soon as he stands by the wall detonate the charge. 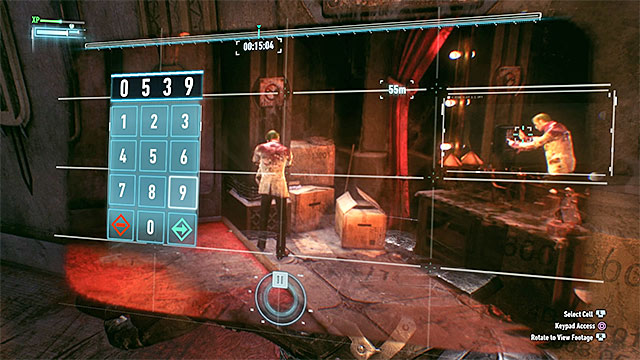 You can now resume your journey to the scene C. Press the button you see on the way and examine the sheet in the central part of the room. Once you regain full consciousness and talk to Robin, go to the next room. Try using the panel by the locked door to find out that you need a 4-digit code to open it.

Batman soon starts analyzing a video. You do not have to select any rectangles, but simply fast-forward the film and observe Johnny Charisma. After he enters the first digit he covers the keypad with his body, but the rest of the code can be seen in the mirror on the right. The correct combination is 0539 - type it in when a numpad appears on the screen (the above picture). 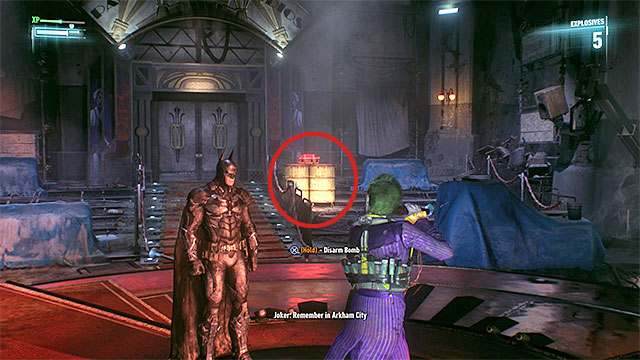 The first of the bombs that you have to disarm

Enter the stage where Johnny Charisma is. At this he starts singing and becomes the Joker. The stage itself starts rotating slowly. You cannot attack Johnny as Batman, because he has armed five bombs and is wearing the sixth one. Instead, take control of Robin, who appears in the background. As Robin reach the first bomb, hide behind it and hold the correct key/button to disarm it. 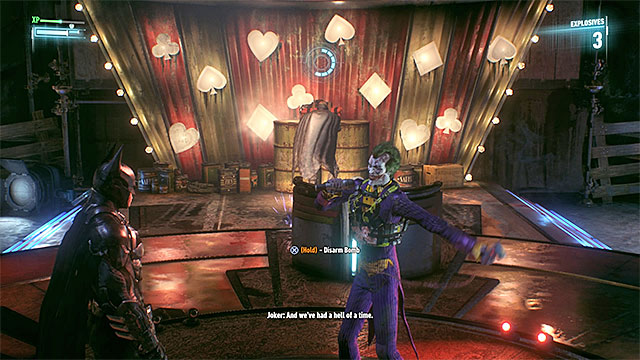 Disarm the bombs when Johnny Charisma is looking away

Now you have to move Robin to the right. It is VERY IMPORTANT that you leave cover only when Johnny Charisma is facing you away, so he did not spot Batman's ally. Each time you get to another bomb hide behind it so not to get spotted while disarming it. There will be no way of hiding in the case of the third bomb, so you need a good timing to disarm it and hide again before the stage makes a full turn. 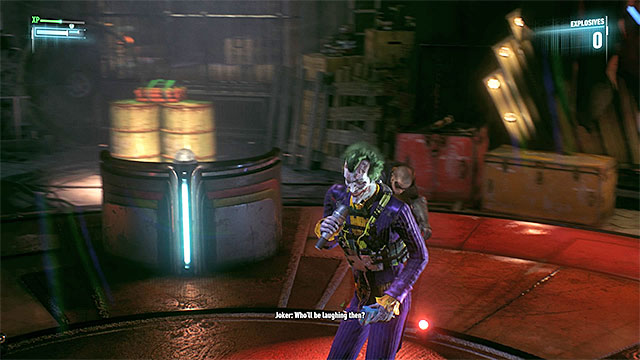 You have to neutralize Johnny using Takedown

After disarming all five bombs take Robin toward the stage where Batman and Johnny Charisma are. Sneak up to the villain from behind and press the Silent Takedown key/button. Robin will disarm the bomb that Johnny Charisma is wearing and then stun him. Wait until Robin picks up unconscious Johnny and head back to the central room of the studio.