On this page of our game guide to Batman: Arkham Knight you can find a description which explains how to apprehend Albert King. He resides in scene A of the studios. Beware of the battle with a mini-boss. 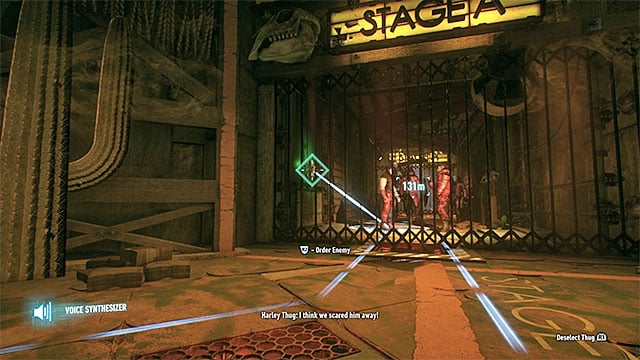 Use the Voice Synthesizer while staying hidden in the vent shaft

Now you should go to the north-west corridor leading to the sound stage A. It is shut, but you can unlock it by tricking the bandits inside (they appeared there only after you apprehended Christina). Use the Detective Mode in order to locate the vent shaft leading to the closed area. Get inside the shaft and approach the opponents. Select the Voice Synthesizer from the inventory, aim at an enemy and use Harley Quinn's voice to command him to open the gate. You can now exit the shaft starting the fight with a Double Fear Takedown.

After eliminating all the thugs press the other button. Approach the character sitting in a wheelchair and try to rescue him. After the cut-scene take the nearby corridor to the stage A (in the meantime, Batman will be joined by Robin). 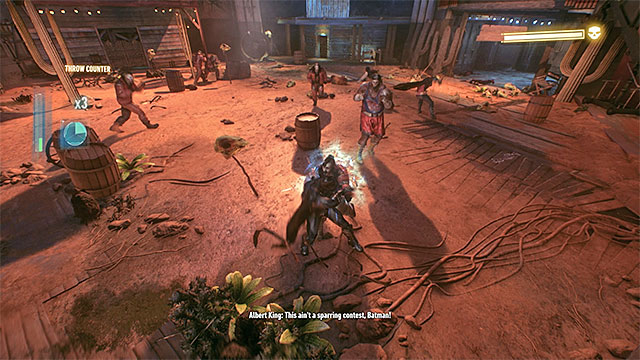 Keep attacking ordinary thugs to stack up the score multiplier

A duel with a mini-boss, Albert King, awaits you. He is not difficult to beat, although you have to follow a few step procedure to gradually lower his health bar displayed in the right top corner of the screen.

After you start the combat, do not try to attack King and if possible stay away from him, so to avoid getting Batman or Robin hurt. Instead, focus on his thugs, jumping from one to another to increase the multiplier. 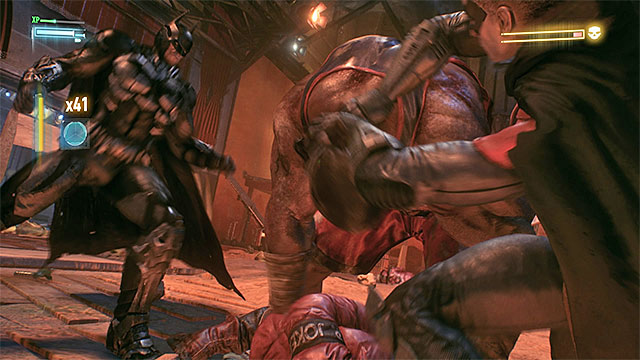 Keep hitting the ordinary bandits until you can launch a Team Attack. Use this as soon as possible - the attack will be automatically aimed at Albert King. Repeat these steps, i.e. knock down the ordinary thugs and perform Team Attacks against the boss.

In the next part of the duel, after launching a Team Attack you will be able to deliver a series of quick strikes resembling a classic Beatdown. Keep pressing the attack key/button. Be ready to counter the boss's attacks by pressing the counter button, when he tries to break free and strike you back. The duel is over when King's health bar drops to zero. Let Robin pick him up and get back to the central room, where, as previously, you will get briefly separated. By the way, Albert will inform you that the last Batmobile upgrade (the one you did not pick last time) is ready to be installed.