On this page of our game guide to Batman: Arkham Knight you can find a description which explains how to stop Herley Quinn from taking the Joker infected. Batman has to use a voice synthesizer and defeat a group of enemies. 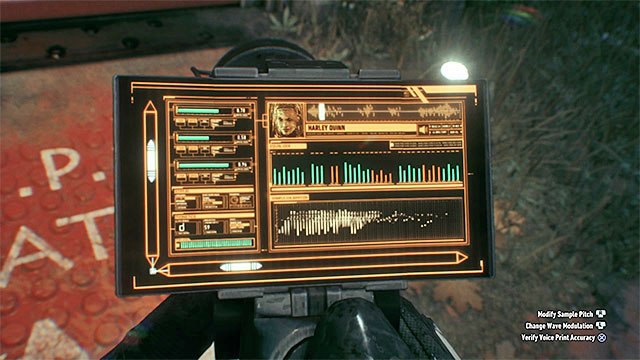 Leave the Clock Tower and head over to Panessa Studios. Again you have to get to the rooftop and approach the elevator exit. This is where 9 bandits await. Two of them are equipped with firearms, so they should be your primary target. Later in combat prevent other enemies from picking up the weapons.

After the fight try interacting with the voice scanner to find out that Harley Quinn has reprogrammed it. Wait until Batman equips Voice Synthesizer and loads a sound recording. You have to move the vertical and horizontal slides to get the perfect imitation of Harley's voice. The correct position of both slides is shown in the above picture. 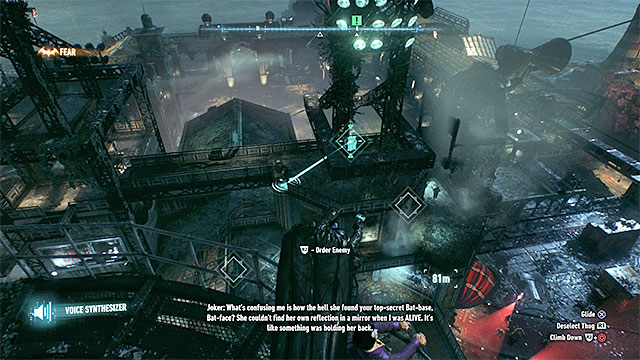 Voice Synthesizer is useful for luring enemies into secluded places

After preparing the voice sample aim the Voice Synthesizer at the scanner and use it. The game will not let you enter the building right away, as more enemies will come from the inside and set up two defense turrets by the entrance. Initially, the game lets you test the Voice Synthesizer while sneaking. Selecting this gadget lets you pick an opponent and give him an order using the voice of Harley Quinn. It is an excellent method for luring out single enemies from groups, so to deal with them secretly.

Neutralize enemies one by one, while keeping low profile. The last human target should be the bandit with a minigun. When you attack him (e.g. from above) remember to initially start a series of strikes and block his counter attacks. At the end eliminate the two turrets standing by the building entrance. Hack one of them using the Remote Hacking Device, and then quickly destroy the one still active. Then hide in the vent shaft, wait until the reactivated turret turns the other way and sabotage it too. 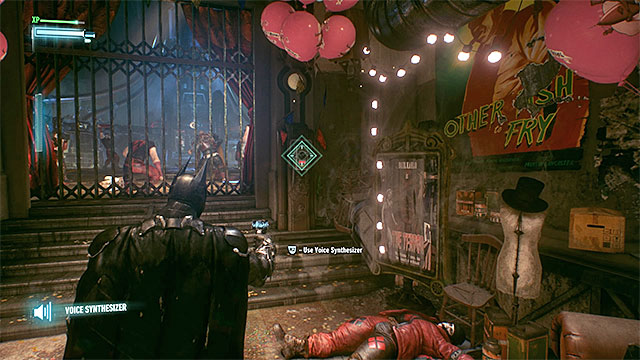 Use voice synthesizer to unlock the main hall entrance

Again approach the voice scanner. Enter the elevator and take a long ride to the quarantine zone in the underground complex of the film studio. Right after leaving the elevator you will encounter for the first time a bandit with a shield. When fighting this type of enemy you have to perform an Aerial Attack. Start by stunning the enemy with your cape, then bend the stick toward him (or hold the correct directional button) and double click the jump key/button.

After the fight select the Voice Synthesizer from the inventory and use it on the nearby panel. You will have to take on more thugs, including the newly met shielded opponents. A good news is that in this battle you are aided by Robin, so switch between the two heroes and remember to use Team Attacks. When you win the fight, interrogate one of the bandits and use the computer.