On this page of our game guide to Batman: Arkham Knight you can find a description which explains how to destroy the Arkham Knight's radar network. Batman has to find two radars and destroy them by using his various gadgets. 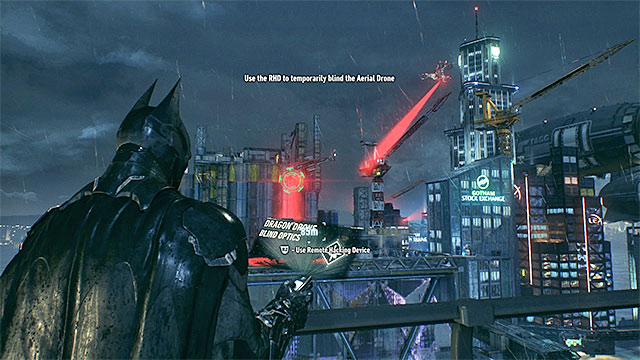 Target the flying drone and hack it

Make sure you have selected the Remote Hacking Device equipped with the newly acquired Drone Hacker. Target the flying machine circling over the first radar and use the device on it. This will shut down its combat effectiveness for 60 seconds.

Quickly get to the roof with the first radar. Approach the terminal, select the Explosive Gel in your inventory, spread it out and detonate it, so to shut down the radar. When you do this leave the area before the flying drone regains its full functionality. 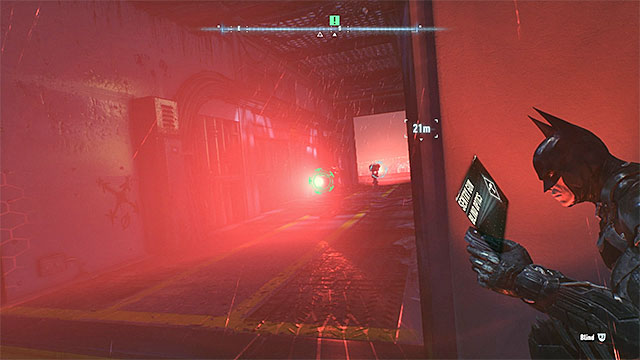 The second radar is in the north-west from here, in Ryker Heights district. No flying machines here, however, you will have a group of opponents on a roof to eliminate. A good way to start this fight, is to use Fear Takedown when one of the enemies stands by the weak wall. Besides, you may also throw a Batarang at the opponent with the cylinder. When the fight proper starts be extra careful of the Combat Experts and block their sword attacks.

After the fight approach the fuse box and unlock the lower passage. Carefully jump down to the lower level and be careful not to get into the fire range of one of the two defense turrets. Stand by the wall, so you could peek out of the corner without getting detected. Use the Remote Hacking Device to turn off one of the turrets for 15 seconds. Run next to it and sabotage the two defense turrets. Finally, spread out the Explosive Gel on the control panel of the second radar to disable it.