On this page of our game guide to Batman: Arkham Knight we have described the rendezvous with Nightwing to get intel on Penguin's whereabouts. Batman will get a new gadget - disruptor. 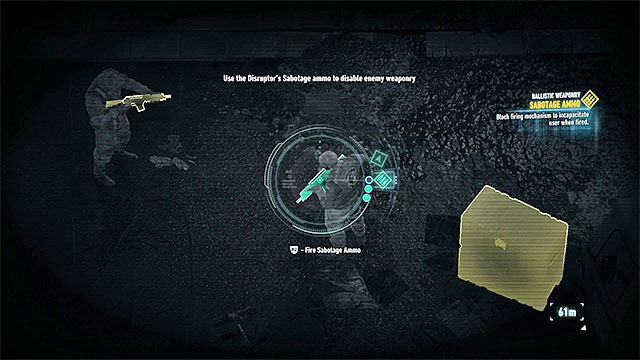 You can use the disruptor for example to sabotage firearms.

Head to the place marked by the game and when you reach your destination, use the grapnel to get to the roof. Nightwing is already waiting there for you. During the conversation, you will learn about Penguin's actions. You will also receive a new gadget - the Disruptor.

Select the Disruptor from the inventory and notice the enemies below you. You have three charges. Use it on the two armed opponents to neutralize their weapons. Send two charges towards one of the weapons and it will explode when the enemy tries to use it. You can now jump down and deal with the thugs (at first, stay away from the one with the weapon that you've sabotaged). During the fight, watch out for the brute and use Beatdown on him. After the battle, select the Disruptor and aim at the van to send a following missile. Lastly, knock on the back door of the van so that it moves.