On this page of our game guide to Batman: Arkham Knight we explain how to track the Arkham Knight's vehicle using the Forensics Scanner (this is a continuation of the previous events). Use the Forensic Scanner in your Batmobile. 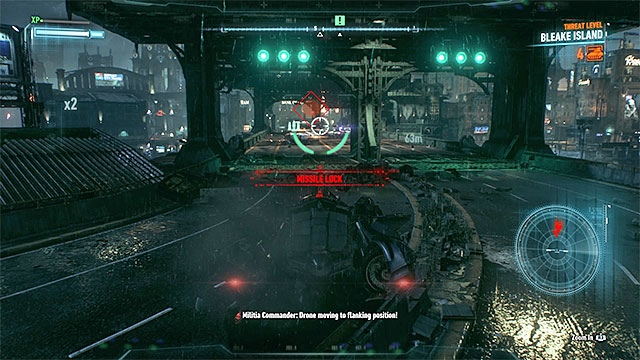 Quickly eliminate the missiles shot at the Batmobile.

Head back to the bridge where you've left the Batmobile. Get inside the vehicle and park it in the lace shown by the game. Activate Battle Mode and use Forensics Scanner to continue following the tracks of Arkham Knight's machine.

During this part of the mission, you will sometimes near to stop and fight with tanks that will appear in the area. It is a good idea to follow the suggestions of the game and use Vulcan Gun to destroy the sensors attached to enemy vehicles. It will allow you to deal with them faster. Use Vulcan Gun also to destroy the missiles as they fly towards the Batmobile. Continue following the tracks. They will lead you to a place where the car crashed.