On this page of our game guide to Batman: Arkham Knight we explain how to track the Arkham Knight's vehicle using the Forensics Scanner. You have to complete this task in your Batmobile. 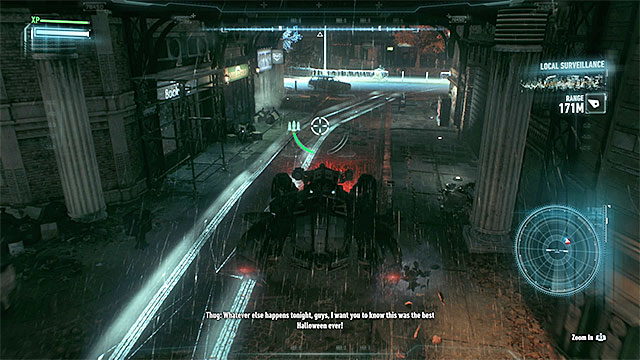 After you use the scanner, you will see the vehicle tracks on the road.

Turn on the computer in the Clock Tower. Go outside (use the hatch in the ceiling) and return to the Batmobile. Activate Battle Mode and press the key/button responsible for using Forensics Scanner. After it starts working, you will notice that the Batmobile is scanning the area for tracks of enemy vehicle, in which Oracle is. Follow the tracks (you don't have to hurry, so focus on not loosing the trail). 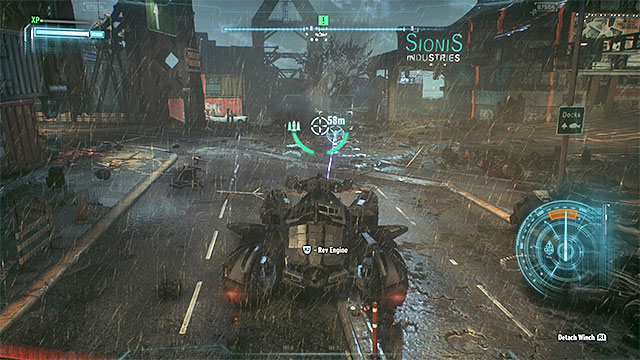 Neutralize the bomb only after you finish the battle.

When following the tracks, you will be interrupted by an unidentified object dropped down by the flying machine. Park near the object, exit the Batmobile and examine it. It's a bomb. Return to the vehicle and prepare yourself for battle. When fighting, you cannot get too far away from the bomb, because it will make it explode. Therefore, you need to be more effective when eliminating enemy tanks and carefully perform your dodges so that you don't fail the mission.

After securing the area and applying the virus, return to the bomb. Use the Winch on it and start to slowly increase the revolution. Just like in one of the missions from the first part of the game, you need to watch the revolution gauge so that it stays in the orange area.

Note - from now, you can search for other bombs. Destroying them is a side quest, which is not required to complete the main story. 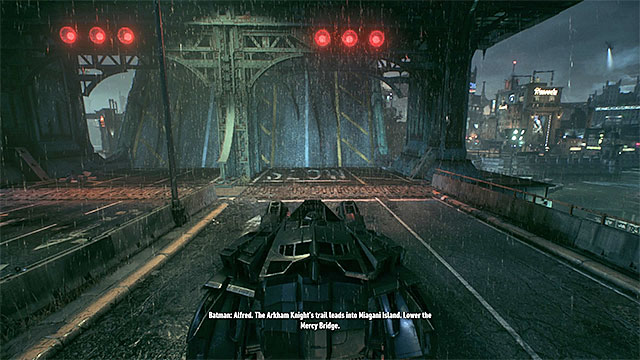 Stop when you reach the raised drawbridge.

After detonating the bomb, return to the Batmobile. Activate Battle Mode once again and use the Forensics Scanner. Locate the tracks of the vehicle and start following them. They will lead you to a raised drawbridge, which connects Miagani Island with the rest of Gotham. Listen to a conversation with Alfred. He will tell you something about the way in which you can lower the bridge. Leave the Batmobile.