On this page of our game guide to Batman: Arkham Knight you will find another part of our walkthrough - how to stop Scarecrow from blowing up ACE Chemicals. Batman has to infiltrate the facility, defeat all thugs and then solve the riddle with cylinders. 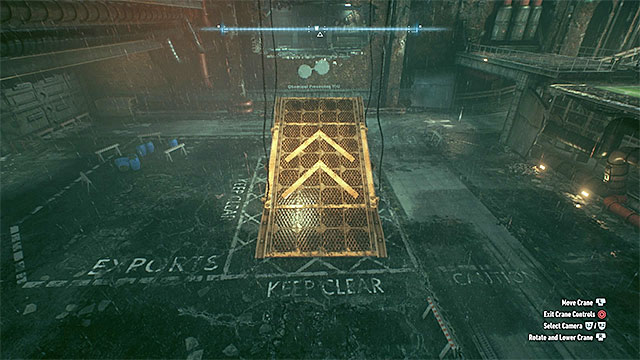 Enter the Batmobile and use the Afterburner to get to the factory. Stop on the first main square and shoot the wall marked by the game, which will make a large hole.

Leave the vehicle and reach the upper platform. You will find a terminal that controls the crane. You need to move the ramp again. Raise it to the position shown on the screen above. Go back to the Batmobile and use the ramp (with Afterburner) to make it inside the building. Head straight and destroy two enemy tanks on the way. 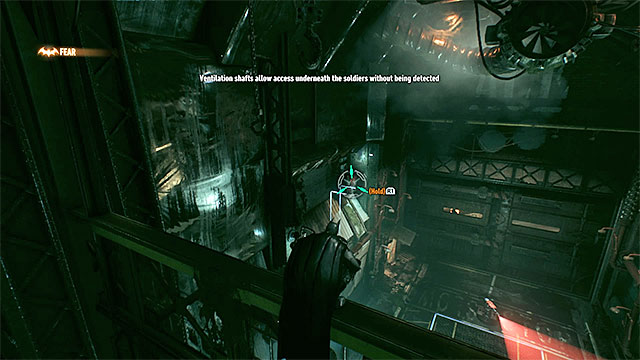 Going through the ventilation shaft will allow you to get close to the enemies.

Stop the Batmobile after reaching a large closed gate and exit the vehicle. Look up and use the grapnel to reach the platform above. Be careful, because there are two guards near the turret that is constantly turning around (the range of view is marked with red color). The best way to safely approach the enemies is to use the grapnel on the bars at the beginning of the top-left shaft. Allow Batman to go all the way to the bottom and move so that you are directly below your opponents. Wait until the guys on the turret can't see you and use Fear Multi-Takedown to quickly deal with both the enemies.

After neutralizing the enemies, hide in the shaft below as quickly as you can so that the guards wouldn't see you. When it's safe again, get out of the shaft and approach the turret. Press the appropriate key/button to destroy it. Listen to a conversation with Gordon and open the fuse box to lower the gates. 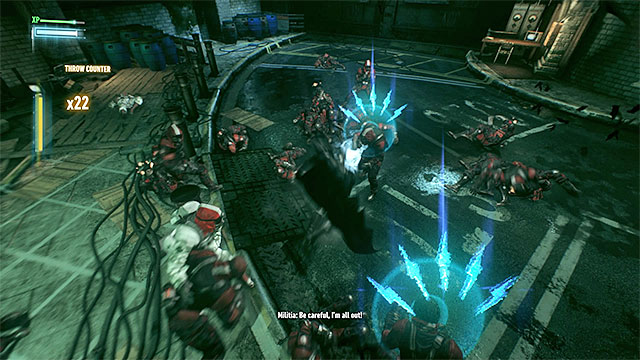 Neutralizing a large group of enemies is not so difficult.

Return to the Batmobile and continue driving. Stop near the next obstacle and use the grapnel to reach the platform on the top. There are as many as twenty thugs in the area, but fortunately - no elite units. It is best to start the fight from attacking one of the medics. Deal with the second one as quickly as you can and watch out for the enemies that can charge at you (you can interrupt the, using Batarangs).

When the battle is over, interact with the fuse box. Get into the Batmobile and head straight. You should reach the last obstacle. Here, following the game's suggestion, you should eject Batman (press the appropriate key/button twice), which will make him reach a large hall. 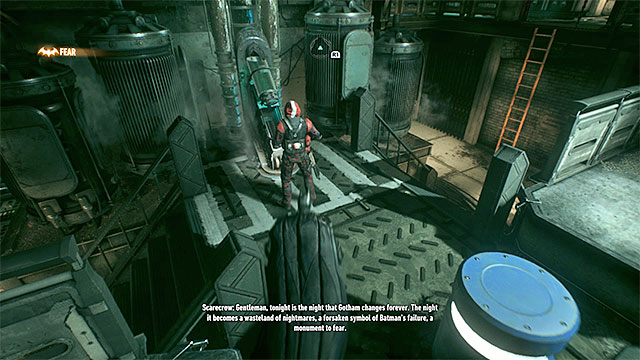 The best strategy is to sneak up to the enemies from behind and eliminate them silently.

There are eight armed enemies in the room and three turrets (fortunately, they cannot turn around and two of them are facing the main gate). Try to eliminate the guards silently, without being noticed. Use detective mode to locate the opponents. You can move around using the cornices and interactive shelves near the ceiling. Look for single targets and attack them in a way that you prefer. You can simply sneak up to them from behind and use takedown or for example use the ventilation shaft, perform executions when hanging from the wall, or spread Explosive Gel on the weak parts of the wall and detonate it in the right moment. If you're noticed, use Smoke Pellets and use the grapnel to quickly go back to the top of the room. 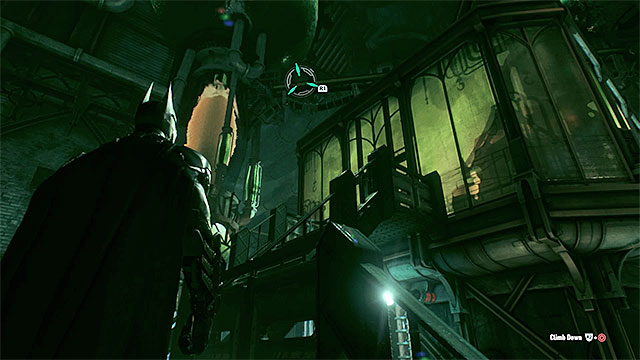 Go to the room above only after you secure the hall.

When securing the hall, be especially careful when you're near one of the turrets. Try to eliminate the enemies around it when they are out of its range of attack (you can also draw their attention with a Batarang). After eliminating all the thugs, sabotage all three turrets (simply approach them from behind and press the appropriate key/button).

When the hall is clear, go up the stairs to the main room. Open the door and watch a cut-scene about meeting Scarecrow. 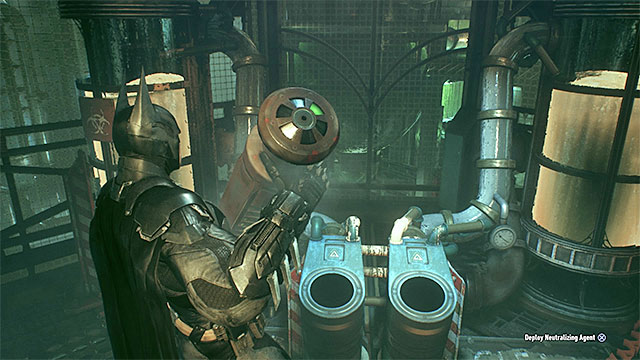 You need to move the cylinders.

Start from approaching the main computer. Use it to prepare the neutralizer. Now, approach one of the four interactive cylinders and start pulling it out slowly. You mustn't hurry. The diodes on the cylinder will inform you whether you're doing everything right. Try not to make any orange or red diode appear. After pulling the cylinder out, you have to slowly carry it to one of the new slots (They are connected in pairs). Interact with the slot and carefully put the cylinder in.

Now you should repeat the steps described above with all the remaining cylinders (pull out, carry it to another slot, put in). After pulling out the last cylinder, you will watch a cut-scene.