On this page of our game guide to Batman: Arkham Knight we explain how to destroy Arkham Knight's flying machine. Our walkthrough explains how to behave when you control the batmobile in order to avoid its imminent destruction. 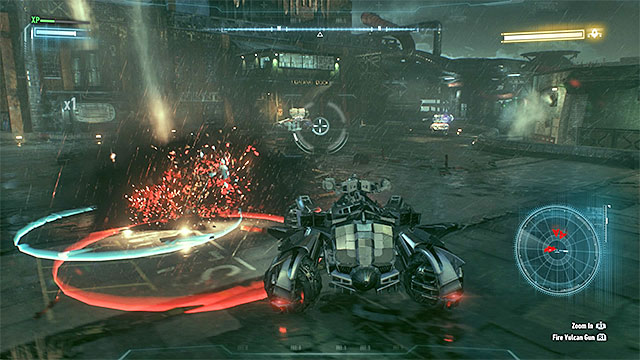 Move away from the red circles before they Arkham Knight attacks.

At the beginning of the battle, don't bother attacking the flying machine controlled by Arkham Knight. Instead, focus on destroying all the tanks on the square. Besides avoiding their attacks, you also need to watch out for the flying machine. The game displays circles on the ground, which mark the area when missiles will explode. Just like in the case of tanks - red color means that you're in trouble. Move away from the spot and use dodging engines to do it quickly. 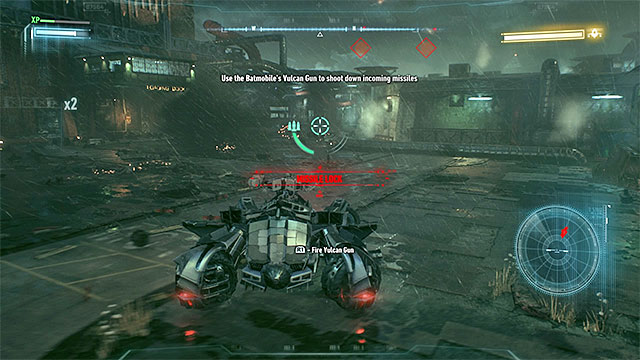 Use Vulcan Gun to destroy enemy missiles approaching you.

After you deal with the tanks, Arkham Knight will shoot several missiles directly at the Batmobile. To avoid being hit, destroy them on the way. Use Vulcan Gun to do that. 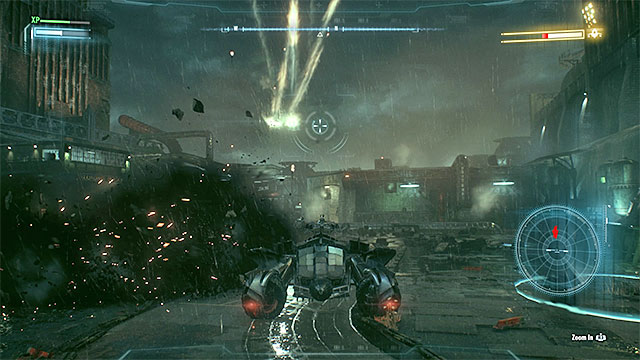 Attack the flying machine and avoid being hit.

After you avoid the first attack, start damaging the machine. Its energy bar can be seen in the top-right corner of the screen. You can lower the bar by shooting from your 60mm cannon. It is very important to constantly move from one place to another and to use dodging engines, because Arkham Knight will perform his attacks regularly. Shooting the machine down will end the fight.

Switch to Pursuit Mode and reach a small ramp. Get out of the Batmobile and approach the switch responsible for controlling the ramp. Raise the ramp and get back to the Batmobile. Together with Adam Brewer, reach the bridge on which you will find Gordon.