On this page of our game guide to Batman: Arkham Knight we explain how to rescue the missing ACE Chemicals workers (this is a continuation of previous task). It's a combination of batmobile cruise with combat and exploration. 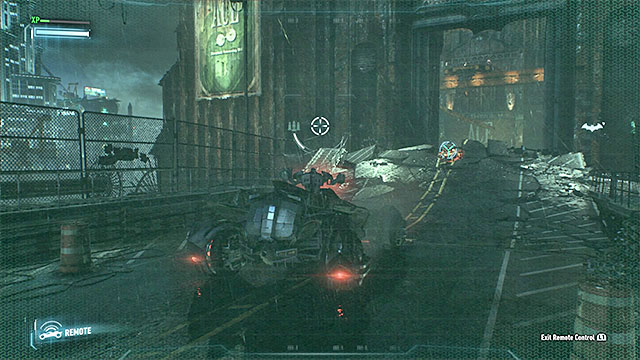 Prepare a ramp using the Winch.

Open the gadget menu and select Batmobile Remote Control. Locate an interactive object and use the Winch. Use reverse to raise the ramp. Head straight onto the ramp and use the Afterburner to make it to the factory main square. Deal with the tanks and remember to slide all the time, which will allow you to avoid enemy attacks (red beams).

After eliminating the enemy vehicles, locate another interactive object on the smaller gate to the right. Just like before, you need to use the Winch, which will allow you to remove the obstacle. Head north-east, to the place where Mark Cheung is. 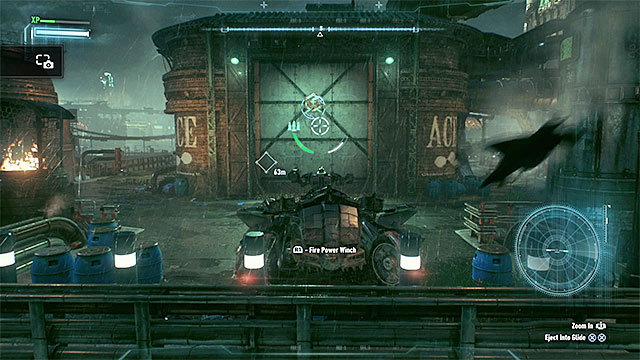 You will find Mark Cheung after destroying this gate.

After reaching the new part of the factory, eliminate the guards around (use Vulcan Gun or run them over). Locate a wall with an interactive object on it and attach the Winch to make a hole. You can now go back to controlling Batman. Get rid of the group of thugs and enter the room where Cheung is. It will result in meeting Arkham Knight and his bodyguards.

Don't try to search for a way out. Instead, after Arkham Knight ends his monologue, use Batmobile Remote Control. Use Riot Suppressor to secure Batman. After the large glass is destroyed, start attacking the enemies. Return to the Batmobile and wait until Mark Cheung gets inside. Head to the bridge on which the police are waiting (use the Afterburner at the end to jump across the broken part). 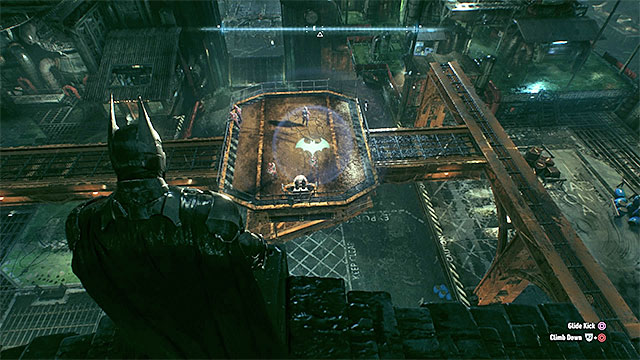 Attack the enemies standing on the platform from above.

Use the Afterburner again to reach the factory main square. Leave the Batmobile and notice the large platform located right above the square. There are a few enemies on it and it is good to attack them from one of the high vantage points. Target one of the two opponents with firearms. When the fight starts, watch out especially for the guards with guns. Try to eliminate them first or at least disarm them.

After you deal with the first group, elite enemies will appear on the platform. During the fight, focus on performing perfect counterattacks. Also, be aware that they may dodge some of your melee attacks. It is therefore good to use some of your offensive gadgets. 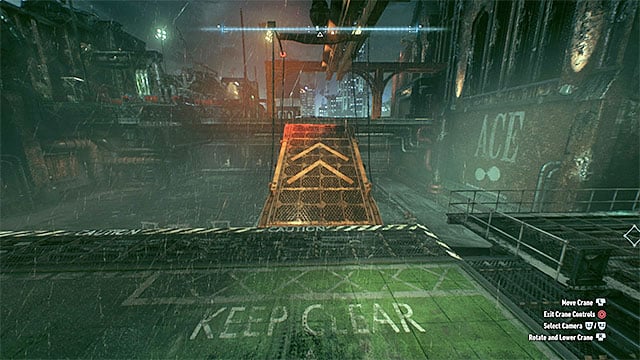 After the battle is over, approach the mechanism that controls the crane and start moving the ramp attached to it. You have to raise it to a position shown on the screen above. Return to the Batmobile and head to the ramp. Use the Afterburner to get to the next part of the factory.

Get onto another large square and deal with all the tanks in the area first. There are a lot of enemy vehicles here, so use your dodging engines and retreat to the previous area if need be. Don't forget about using Missile Barrage - during the end of the battle, you should be able to launch level 2 of this attack (destroying four targets). 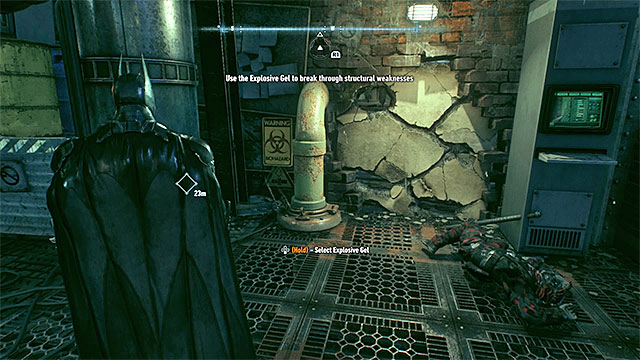 The place where you use Explosive Gel for the first time.

After the battle, don't leave the Batmobile but use the Winch on the nearby object to damage the large pipe. Now, head to the room located above the loading zone, with several enemies inside. You can get to the room through one of the windows or through the roof. When the fight starts, deal with the medic (dressed in white) as fast as you can, as he is able to heal his allies.

When the fight is over, look for a week wall near the big pipe (you can use detective mode). Choose Explosive Gel form the inventory, approach the wall, use the Gel and detonate it. Use the newly opened passage to reach Gerald Wicker's body. 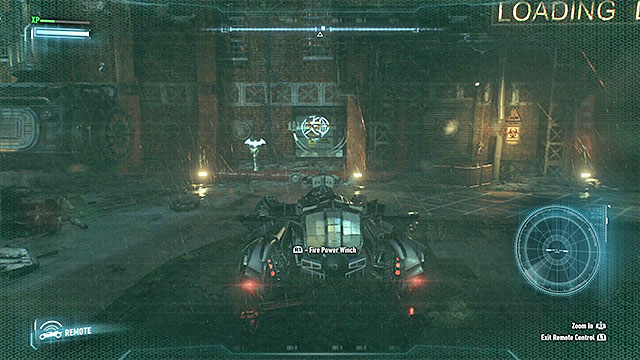 You can use the Winch on the pipe only after you use Explosive Gel and hack the terminal on the wall.

Listen to a conversation with Oracle and Robin and then use Explosive Gel on the weak spot in the floor. Jump down to a lower level. Don't come close to the pipes with poisonous gas spreading from them. Use Explosive Gel again to find another pipe. You cannot damage it now, but you can use the Batmobile.

Approach the fuse box on the wall, open it and allow Batman to open the nearby shutter. Activate Batmobile Remote Control. Head towards the shutter and use the Winch. When it catches the pipe, reverse to damage it. Completing all this tasks will allow you to proceed. In the next corridor, you will find Steven Reilly's body. 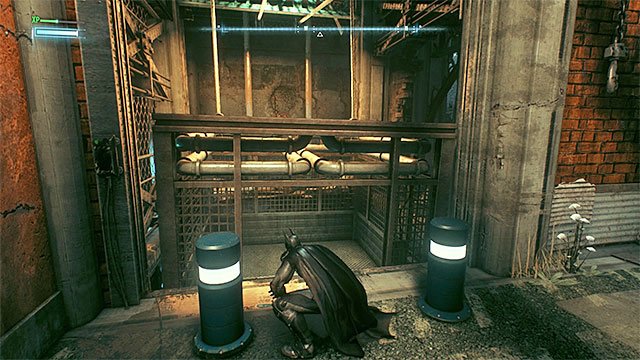 Enter the elevator after you raise it with the Batmobile.

Stop when you reach the elevator. Break into the fuse box to open the gate. Now, use Batmobile Remote Control and shoot a rocket at the weak wall located near the elevator shaft. You will see an interactive object on which you should use the Winch. Reverse to raise the elevator. 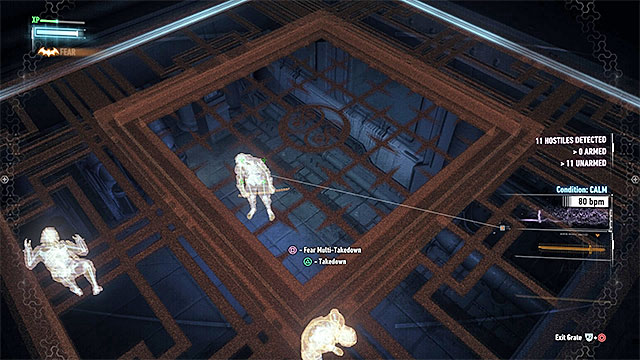 Jump out of the ventilation shaft when you are above the enemies.

When the elevator reaches the bottom, take control over Batman and enter a new area in the factory. Use the grapnel to pull yourself to the hatch in the roof and start going through the ventilation shaft. Stop when you reach a room with several enemies. It is best to start the fight from Fear Multi-Takedown. Focus on the medic in the white suit. You can use objects from the environment to eliminate the enemies, but it is not necessary.

When the battle is over, approach Adam Brewer. Take him to the elevator and use Batmobile Remote Control once again. Reverse to raise the elevator with Batman and the rescued hostage. As you leave the elevator, a cut-scene will appear. You will participate in the first boss fight.