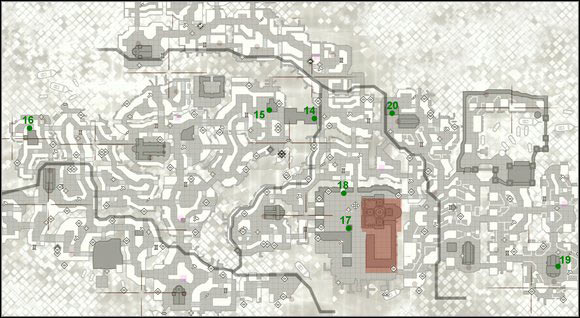 It is located under the bridge marked on the map - you can get to it swimming under the beam. [1] In the puzzle you have to select paintings with some sexual scenes (Cupid and Psyche, Danae Visited by Zeus, Jupiter and Io, Rape of Europa, Leda and the Swan). [2]

It is not far from the bridge under which you have found the previous Glyph. This time go to the next building - at the top there is a small dome and a statue. Under it you find a mark. [1] Now, solve one rotary puzzle [2] a then move the cursor over all parts of the world map.

It is in north-western part of the city on one of the buildings. Wall, on which the sign is, is directed to the east. [1] Solve the riddle by pointing the correct name (Tunguska) [2] and then mark the picture.

It is located on the top of the large tower near the huge basilica / palace. [1] Climb there and look at your feet - the sign is on the floor. Find the code looking on the pictures (7 - a shape similar to a space craft, 9 - horizontal hourglass, 1 - circle in diamond). [2] After this search the right upper side of the house in the photo.

It is near the previous Glyph. On another tower on the floor. This time tower is much smaller and situated near the cathedral (this is the part of a larger building). [1] It is another puzzle with characters and numbers. Enter the code (see picture above) [2] and (on the next screen) activate all objects.

Located on the wall of the temple on the southeastern edge of the district. [1] In this puzzle you have to select images, in which the sun is honored (Aztec Calendar Stone, The Eastern Gate, Nazca Textile, Book of the Dead, Sistine Chapel Ceiling Fresco). [2] Then target the object on the map of the sun.

Located on the back of the building (on the roof). [1] This is the solution of the first puzzle: [2]

Select the image of the sun. [1] In the case of matching numbers and characters you can choose any sequence (look at the hint). [2] At the end you have to repair the whole construction.