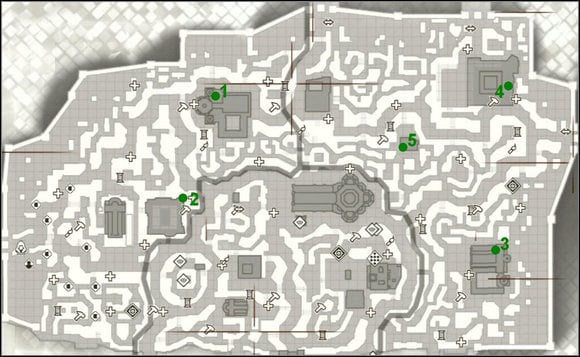 It is located on the inner wall of the north tower of the indicated the building. [1] You will see some pictures and you will have to find some similarities. It is the presence of apple mark all the paintings with the fruit (The Fall, Idun and the Apples, Judgement of Paris, Atalanta and Hippomenes, Hercules in the Garden of the Hesperides). [2]

It is in the northeastern end of the market. [1] To unlock the material we have to arrange 3 puzzles with Queen Elizabeth I, Napoleon and Washington. [2] Start with the face and then match the rest.

It is located on the cathedral near the feather (on the north, side wall). [1] In this task we have to use a special view to find a spherical object. [2] In the first image it is below a third man from left. At the second one it is just below the head of a man hanging upside down. On the third one man in the center has it..

Located on the roof of the northeastern villa. [1] In the puzzle you need to re-target all objects. In the case of the picture from Vietnam look at the soldier and his weapon, k- the answer is in it's visible end. In the photograph from France you have to point a gun in the center. In the case of South Carolina painting, you must focus on soldiers with bayonets - the answer is at the end of their row. The last image contains some men - one of them holds a flaming ball, which you have to point. [2]

Located on a small, distinctive house. Its upper part is decorated with plants. [1] In the puzzle, you have to identify the person, that is holding a symbol of power (sword). So choose images of: Perseus, Greece, Attila the Hun, Eurasia, King Arthur, Sigmund, Norse, Joan of Arc, France. [2] In the second part guess on which paintings characters have a stick (Shabataka, Egypt, Peter, Jerusalem, Moses, Egypt, John the Baptist, Jerusalem, Alexander the Great, Macedonia).