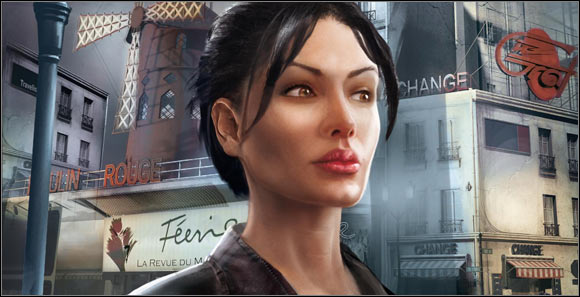 FBI Agent Nicole Bonnet is working on the case of the Puppeteer, a serial killer operating in the US between August and December 2007. All of his victims were styled in such a way that they resembled puppets. He left his greeting card on every body he left behind - a puppet dressed in an outfit from the French revolution period. When it seems that the Puppeteer has finished his killing spree, a similar murder occurs in Paris. Nicole travels to France to check whether the murder was committed by the Puppeteer or if someone is copying the psychopath's habits...

In the second part of her adventures (just as in the first one) Nicole has at her disposal a system of hints: a magnifying glass near the bottom right corner of the screen shows all active objects and entrances/exits from the location you are in. You can also get some hints if you try to leave the room or ride away in your current vehicle too early.

The mouse cursor shows us exactly what actions can you perform - look at the object (small eye on the right side of the cursor) or use/collect it (hand on the left side, signaling a left click). The items you pick up go to your inventory (they're marked red throughout the walkthrough). Right clicking on them will zoom in and, in some cases, additional information. Left click will allow you to pick them up, open or disassemble, allowing to extract things hidden within.

This time Nicole has a camera at her disposal - she uses it quite often, at least in the first chapters of the game. The cellphone she has on the other hand, is completely useless.

Miss agent has also a notebook in which she records all of the dialogs, descriptions of each day of her adventures and the files for of the US Puppeteer cases (which occurred months before the story takes place) along with the murderer's profile.

All of the accessories along with the inventory are available at the bottom of the screen.

Double clicking the left mouse button forces Nicole to run. A single click forwards the dialog, and Esc button allows you to cut the cut-scenes short. In order to zoom out of the inventory item you need to press any button near the zoomed object.

Which of the mysterious men Nicole meets in her travels throughout Europe is the psychopath killer? Jack Dupree, Louis Carnot or Marc Taine? or maybe neither of them...?

About Art of Murder: Hunt For The Puppeteer Game Guide & Walkthrough

Hot Topics of Art of Murder: Hunt For The Puppeteer Game Guide & Walkthrough

Art of Murder: Hunt for the Puppeteer Video Game