The guide for Ancestors Legacy contains all information that is necessary to complete the game in 100%. You can find walkthroughs for all campaign missions, read tips and learn how to play as each of the factions efficiently. In our guide you can also find answers to questions such as how to use your army efficiently, learn how to gain advantage by using units' weak and strong points or check out the list of the achievements.

Here, you can find starting tips that will make Ancestors Legacy easier for you. Also, this chapter contains information about the game's interface and available game modes.

Here, you can find additional information - you can learn about the PC controls, check out system requirements and the list of achievements available in the game.

This chapter is dedicated to problems with Ancestors Legacy. Read answers to the questions related to the game - which difficulty level is recommended for the campaign, how to fight efficiently, how to unlock all campaigns etc.

Descriptions of the available factions

This part of the guide contains information about the available factions. Ancestors Legacy features the following factions: Vikings, Anglo-Saxons, Germans and Slavs. Each of the factions has strong and weak points as well as strategies that can be used to counter them.

Walkthrough - descriptions of the missions

Here, you can find our complete walkthrough - descriptions of all the missions available in Ancestors Legacy. The game features 6 campaigns during which you will play as four factions - Vikings, Anglo-Saxons, Germans and Slavs. You will be able to control historical characters such as: Ulf Ironbeard, Rurik, Edward the Confessor, Harold II Godwinson, Rudolf I or Mieszko I. Usually, these missions are very challenging and they require a lot of patience.

How much time do I need to beat Ancestors Legacy?

Ancestors Legacy features 6 campaigns - each has 5 missions. These missions can be really long and can often take you more than an hour. This means that the campaign on the default difficulty level can take you 25-30 hours to beat. In addition to that the game also has skirmishes mode where you can fight on special maps and in two different modes - Annihilation and Domination. All of this makes Ancestors Legacy a lengthy RTS with a lot of content - what is more, the developers are planning on releasing more historical campaigns.

Ancestors Legacy in a nutshell 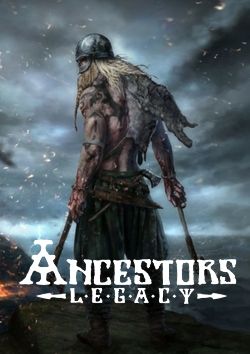 Ancestors for PC, PS4 and XONE is a complex real-time strategy game developed by an independent Polish studio, Destructive Creations. Developers who work there have a reputation of being scandalous due to their controversial shootem up game Hatred and rail shooter IS Defense where the players repel an invasion of the Daesh. Despite that, Destructive Creations managed to establish cooperation with 1C, a company that published the game in topic. Initially, Ancestors was released on PCs and Xbox One and on a later date on PlayStation 4.

Like many other RTS games, Ancestors for PC, PS4 and XONE focuses on large-scale battles. Figuring out appropriate tactics that consider the lay of the land and skillfully flanking the enemy are the key elements that will lead to victory. Our soldiers morale and experience influence their combat effectiveness. Cutting off our enemies supply lines is also an important aspect of gameplay because along with the open-field battles, we will be able to besiege enemy towns and villages. We will also have to pay some attention to the economic side of our conquest (i.e. gathering materials and resources, upgrading and improving our headquarters).

What makes Ancestors stand out among the similar games is the low entry threshold  both newcomers and experienced players will feel at home when playing it. What makes the game even more interesting is the possibility of observing the battle from the first-person perspective of one of our soldiers.

Ancestors for PC, PS4 and XONE features high quality 3D visuals and uses Unreal Engine 4. The games environment is full of detail, just like the military units we will lead and fight against. Advanced particle effects (like realistic fire and smoke) only complement the already visually pleasing game. This site is not associated with and/or endorsed by the 1C or Destructive Creations. All logos and images are copyrighted by their respective owners.