This page of the guide to Amnesia Rebirth contains a walkthrough of the chapter called The Catacombs. The following walkthrough describes, among others, how to deal with sleeping ghouls encountered in the catacombs and to get to the exit to the Portal Chamber.

You can find 15 secrets in The Catacombs:

Starting the crossing through the catacombs 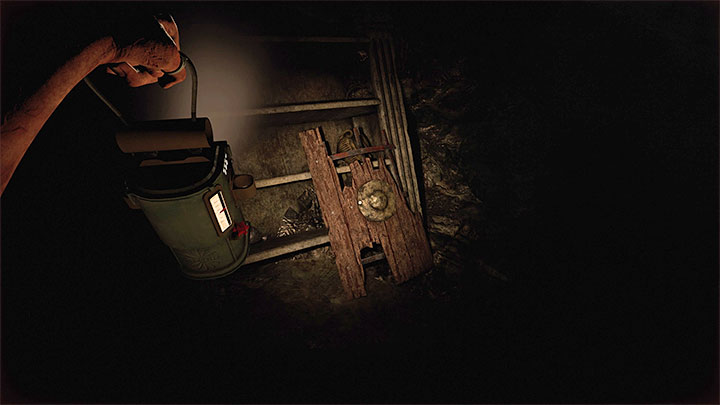 When exploring The Catacombs, use matches and a lantern (there is an oil container in the starting room) because there will be many dark rooms there. After you finish squeezing through the first tunnel, find the boards shown in the picture with matches hidden behind them. 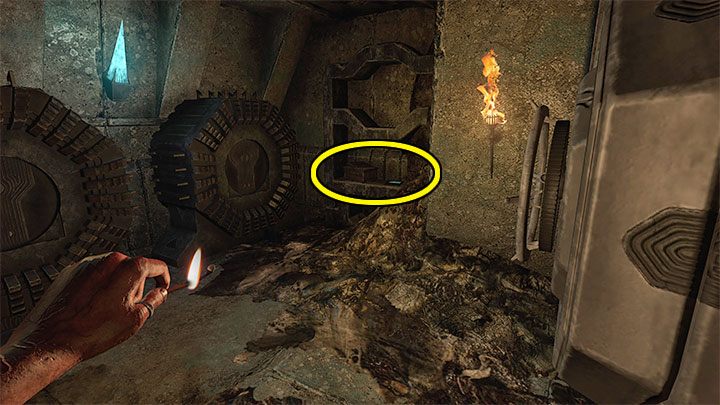 Go forward and reach the room with two big gears. Examine the shelf to the right of them marked in the picture. You will find: 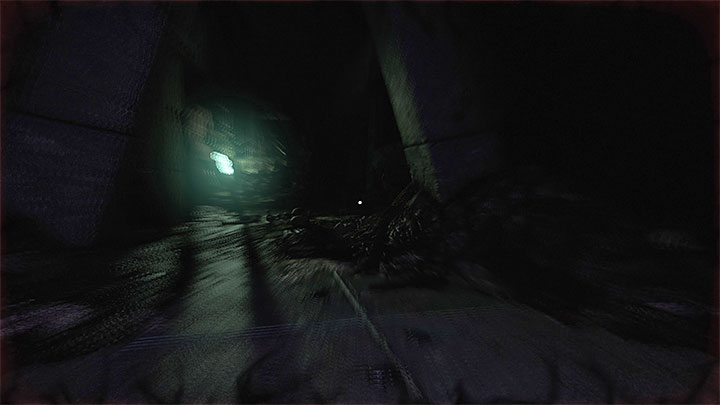 Approach the wheel and use it to unlock a new passage. When exploring the new Catacombs' area, you will encounter a sleeping ghoul for the first time. It's quite obvious how you should react in this case - you have to move in a crouched position not to wake up the ghoul, not touch the monster, and avoid unnecessary noises. If the ghoul awakens, you will have to run away, lose the monster, lie down on the ground and wait for the chase to end. 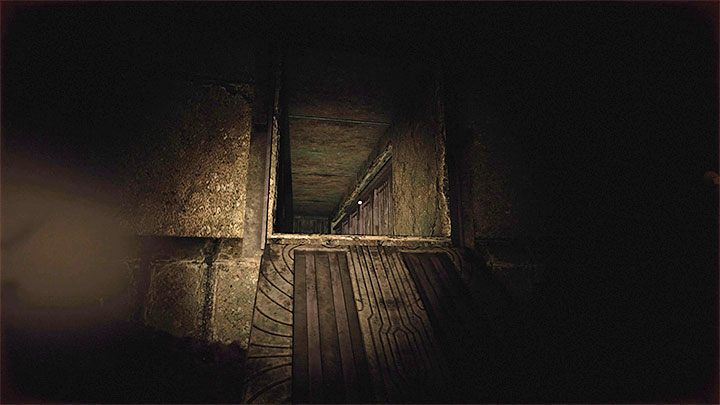 In the new dark area, you can find matches x2 :

We recommend that you skip searching for them because it is very likely that you will use up a lot of matches or oil in the process and find nothing else. 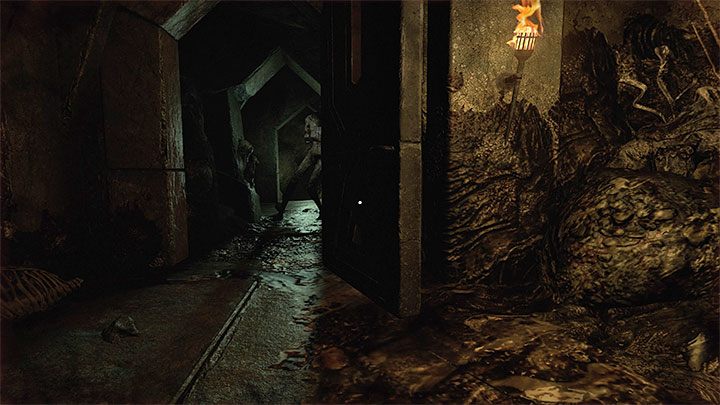 The main exit from the room is blocked by another sleeping ghoul (picture above). Examine the area to the left of it to move the board (you can also try throwing an object), then run away and wait for the monster to finish searching the area. This should allow you to move on. 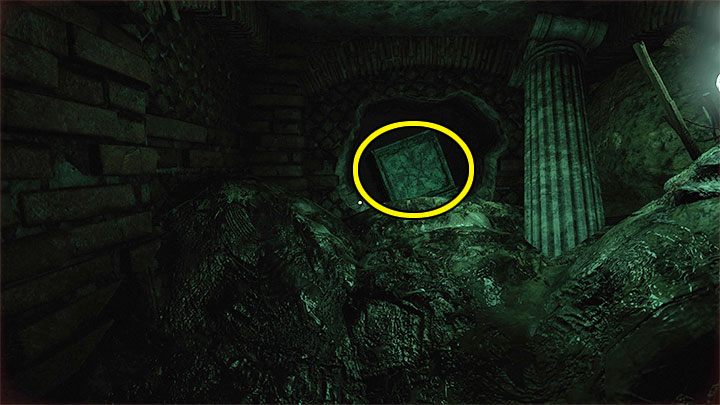 The heroine has to squeeze through another very narrow passages. At the branches, choose the ways that lead upwards. You should reach the place shown in the picture, where you have to push the chest to unlock a new passage. 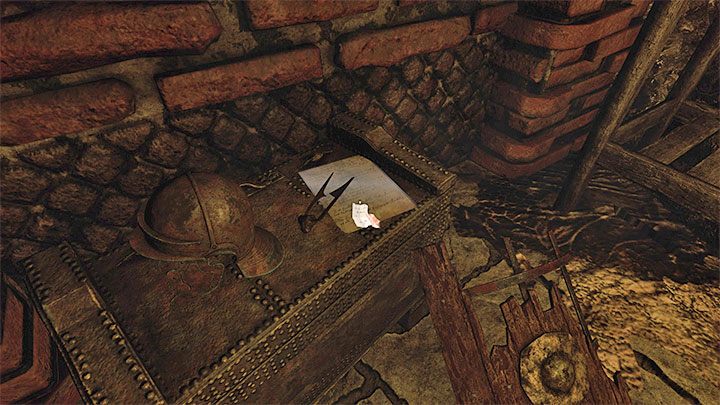 Jump down to a new location. You should look around it. You can find: 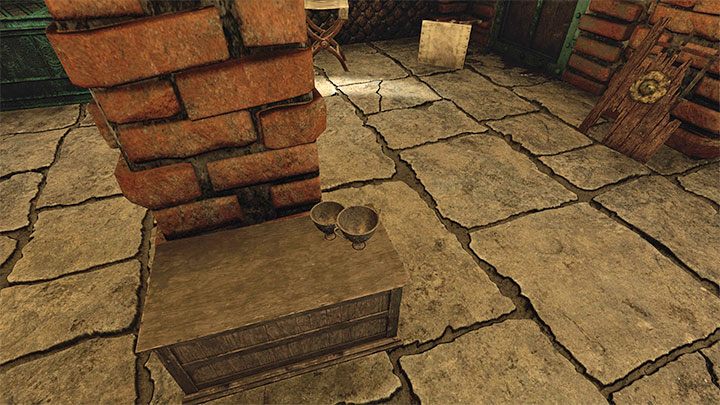 Go to the adjacent room. Approach the chest shown in the picture above. Take off the vessels on the chest so that you can open it and find matches x2. 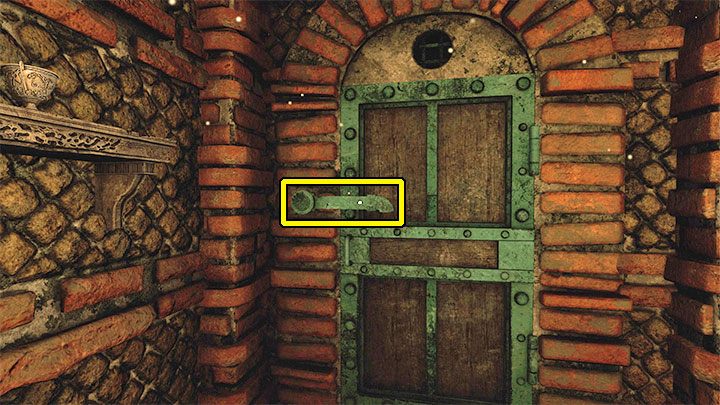 A locked door leads to the next room, and to open it, you have to move the mechanism marked in the picture up so that it is positioned vertically. After unlocking the door, it's a good idea to pick up the oil from the container on the left. 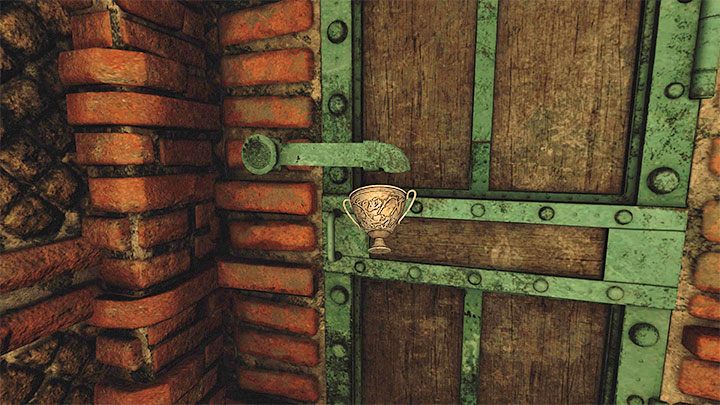 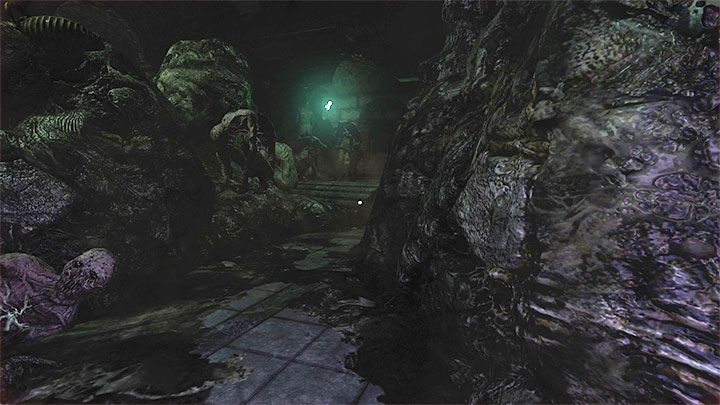 You will enter a room with a large number of sleeping monsters . Sneak in a crouched position. Do not rush in here. Avoid the subsequent monsters while keeping a safe distance, and if one of them is blocking the passage, look for an alternative path. Ultimately, you have to reach the door at the other end of the room. 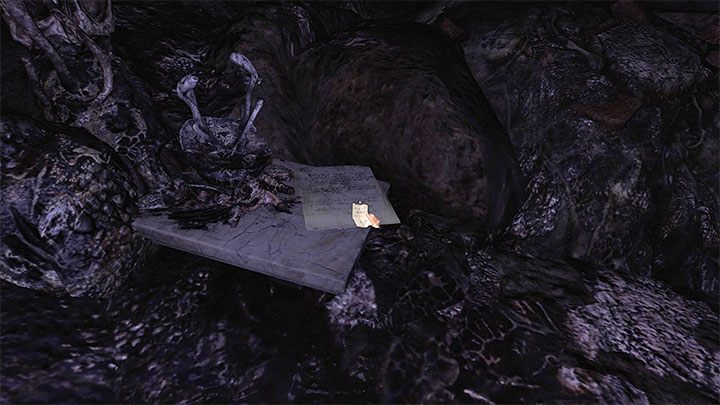 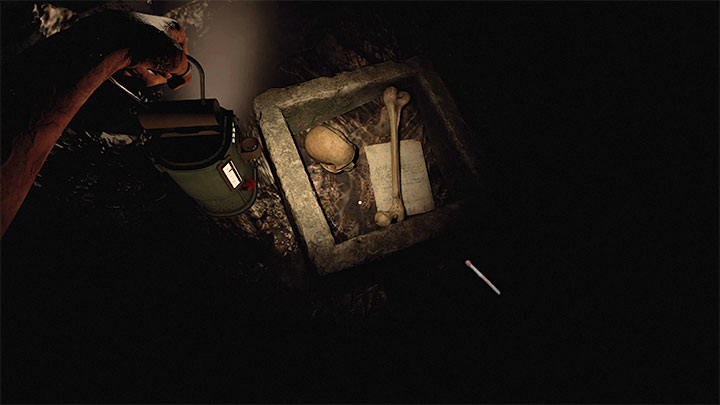 The path further goes down to a small area. Look for a secret from picture 1 - The Catacombs: Leon's Note .

Turn left and break the plank to squeeze into the adjacent location. There are matches in the place shown in picture 2 and another collectible - The Catacombs: Leon's Note (this note has a different content, despite the name identical to the secret found previously). 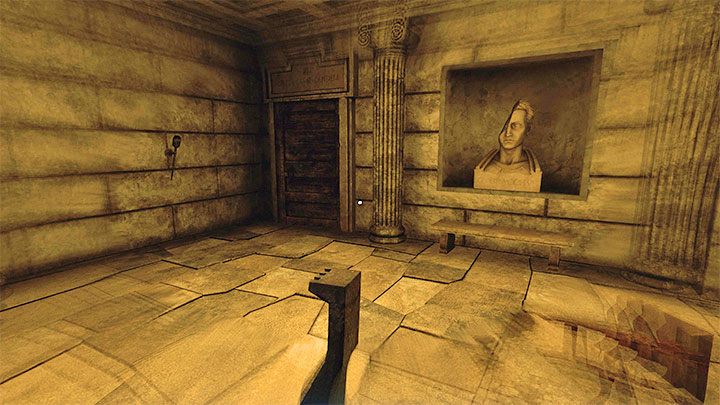 Follow the narrow corridors until you reach the room with a large bust shown in the picture. Do not rush to search it - you may encounter a ghoul there that can easily locate and kill the heroine. Wait for the monster to leave and then look around the room. You can find matches and oil. 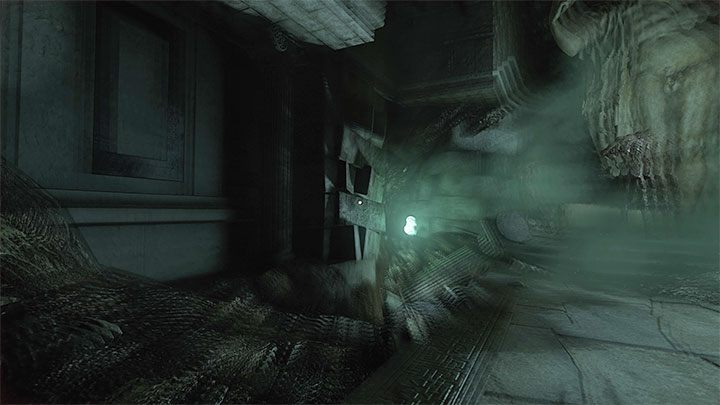 Open the door and move on. You will reach a room with a statue and a ghoul. The monster can be easily avoided by going the path to the left of the statue.

Keep sneaking in and find a small container with matches on your way.

Escape from the ghouls 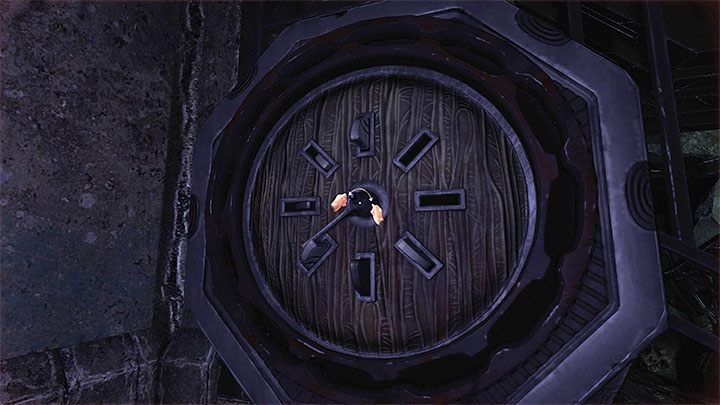 There is a new wheel in the area, but first you have to remove its cover. It is a bit different because, in addition to rotating the mechanism, you also have to push the darker buttons that block the moving hand. Repeat this until the gate is open. 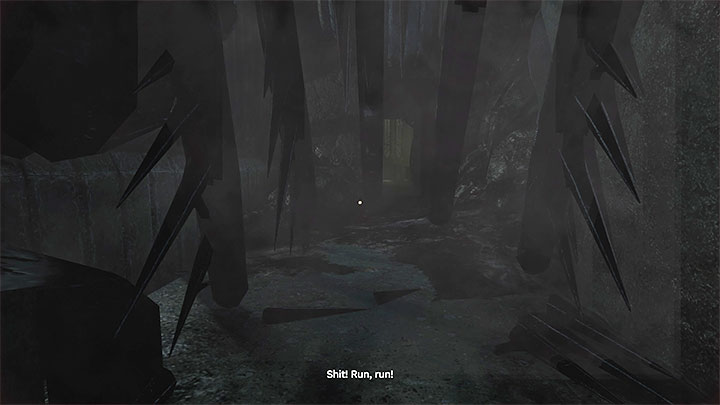 Go to the unlocked passage, and crouch to go through the opening. A slight push may be required. The chase will begin. 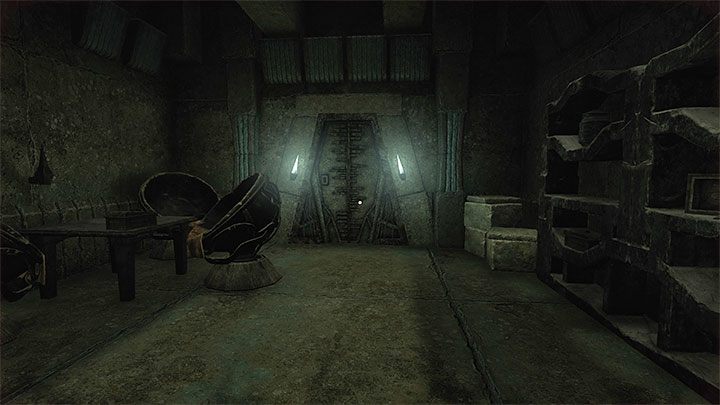 During the escape, make sure that you have the sprint turned on. You have to react quickly along the way and choose the forks with no monster at the moment. Try to avoid stopping because Tasi can then be caught.

The chase will stop for a moment in the room shown in the picture. You can use this opportunity to find oil and matches in a small chest. 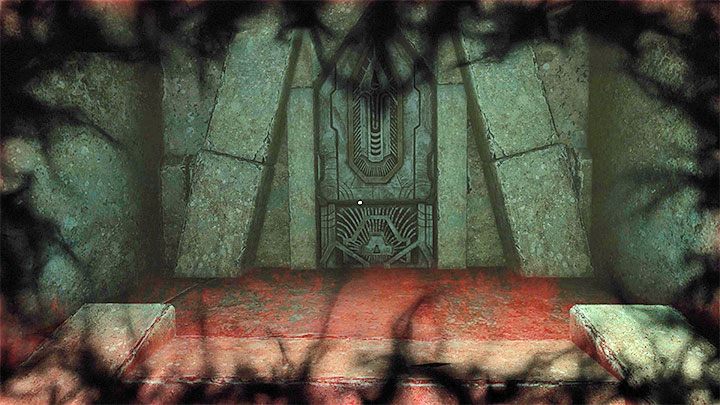 Open the door and continue escaping. Your destination is the door shown in the picture, which leads back to the Portal Chamber.