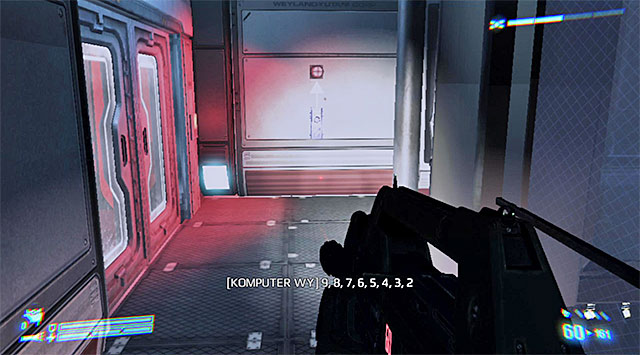 Move to the adjacent room and go upstairs. For the first in the game you'll be forced to shut down emergency protocols to stop the spreading of a poisonous gas. You have only 10 seconds to do it, but luckily, the terminal is just on the right, at the end of the corridor (the above screenshot). 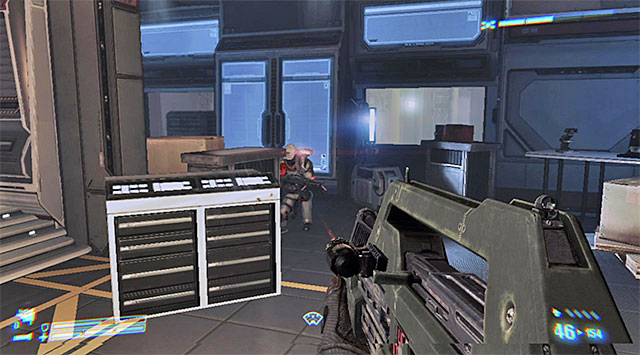 Hit the room where the Weyland-Yutani mercenaries are defending themselves; otherwise you'd have some difficulty locating them. Get rid of all enemies, they shouldn't pose any serious threat. 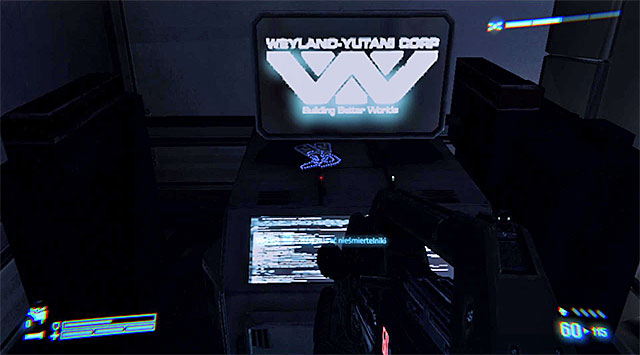 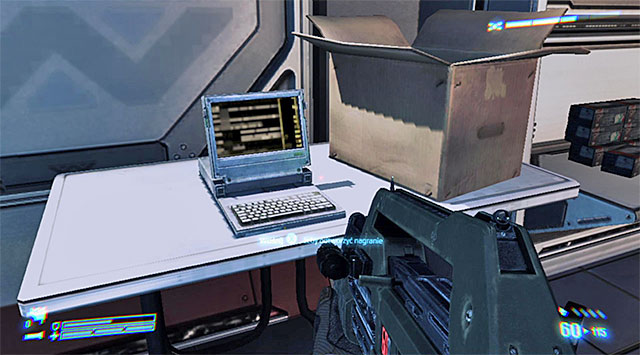 When the fighting is over, locate two new secrets. For starters, backtrack to the corridor in which you used the control panel earlier. Search the area on your right to find the Dog Tag pictured on screenshot 1 (PFC K. Barrington). Enter the science lab you've just secured and look for the Audio Log from screenshot 2. 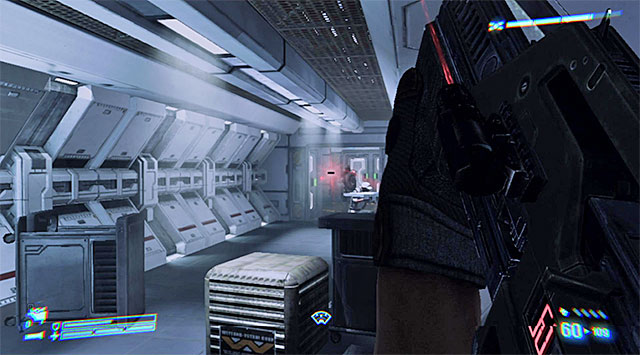 Go through the door leading to the next area of the facility. Follow the linear path until you reach the stairs, and go down. Take care of a single guard and go for the exit. In the new corridor, watch out for new enemies which will show up where the screenshot indicates. Get rid of them using the grenade launcher or regular grenades. 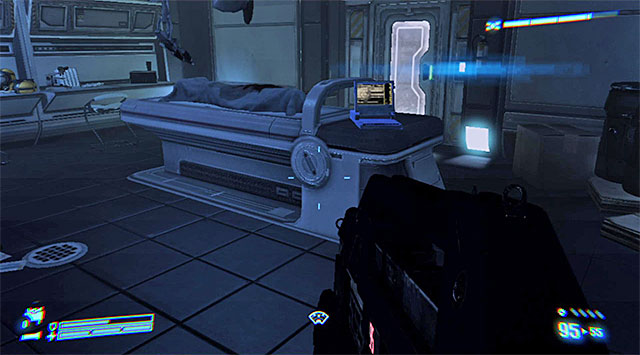 Continue exploring the facility, but don't worry, there are no new encounters for the moment. When you enter the dimly-lit room with two bodies, look around for the second Audio Log, illustrated above. 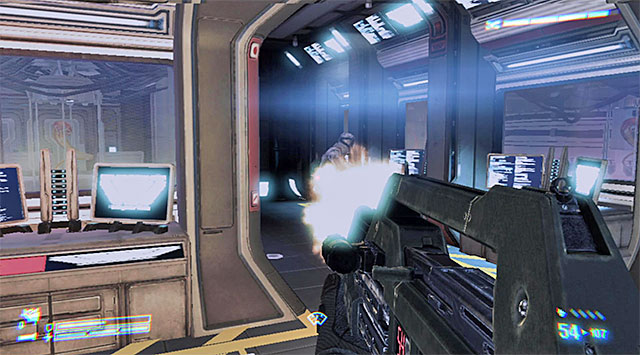 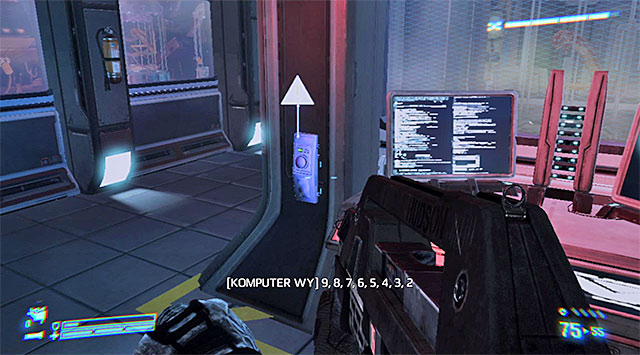 There are armed scientists in the adjacent room. The best thing to do would be to follow O'Neal's advice and deal with them immediately, not letting them a chance to react (screenshot 1). If you're not fast enough, one of the scientists may run to a control panel and sound the alarm. If so, you're going to have to repeat the process of shutting down the emergency protocols (screenshot 2), again with 10 seconds at your disposal. 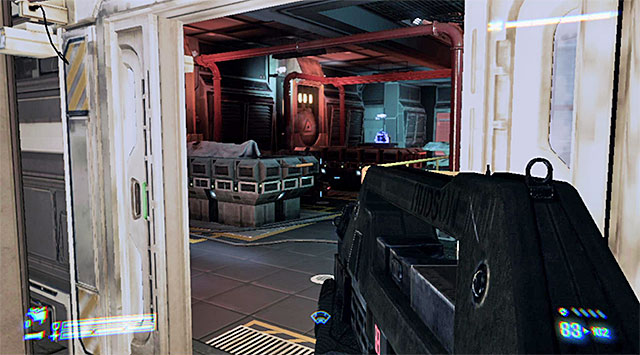 When all enemies are down, search the small corridor on the right to find a full set of armor. Backtrack to the room with the murdered scientists and take the main door. You'll run into new enemies in the area pictured above; due to weak lighting, use the motion tracker to detect hostile units. 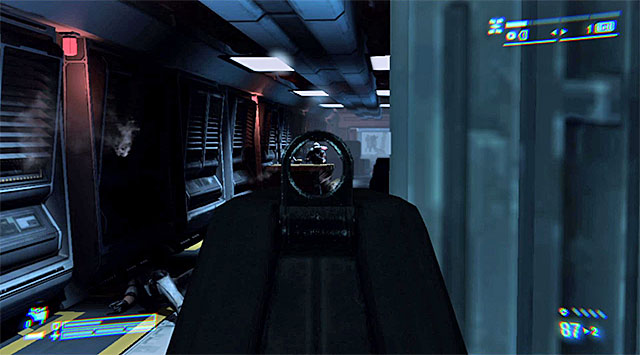 A much harder encounter awaits you in the nearby corridor, though, (the above screenshot), because new enemies will spawn quite regularly. The best spot to eliminate them from is around the entrance; if possible use grenades or the grenade launcher. Don't lean out of the cover and don't try to search the corridor until all Weyland-Yutani mercenaries are killed. 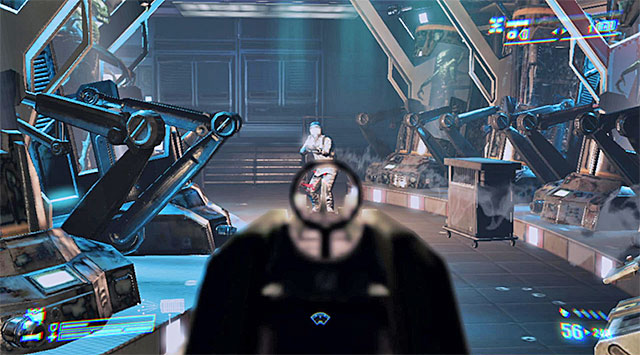 In one of the subsequent room you'll come across three armed scientists (the above screenshot), but given that they're poorly armored, they shouldn't pose any threat. Get rid of them and proceed forward. 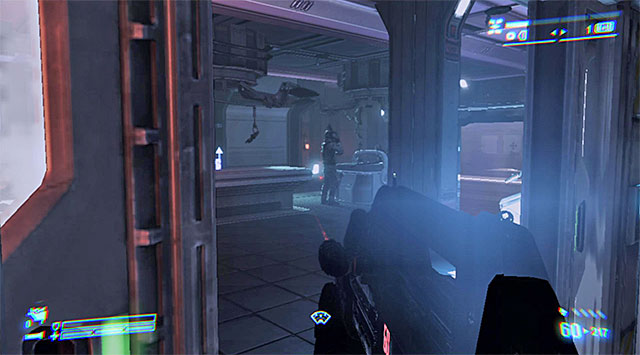 When you reach the room pictured above, prepare to take some extra measures. The enemies should be taken down as soon as possible so that none of them could reach the control panel and sound the alarm. Pick a good spot and fire in series if needed. When it's over, resume the move forward. You'll receive new orders in one of the adjacent rooms.