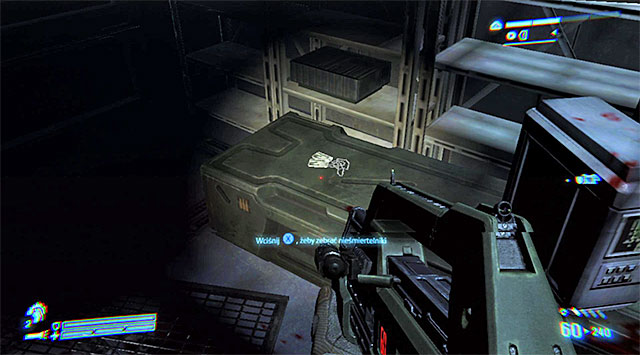 Examine the large room with no enemy encounters. Find the corridor with very distinct blood stains. It will take you to another armor set and another Dog Tag (Sgt Z. Forcher). Pick them up, approach the door leading to another section and open it with the unfailing welding torch. 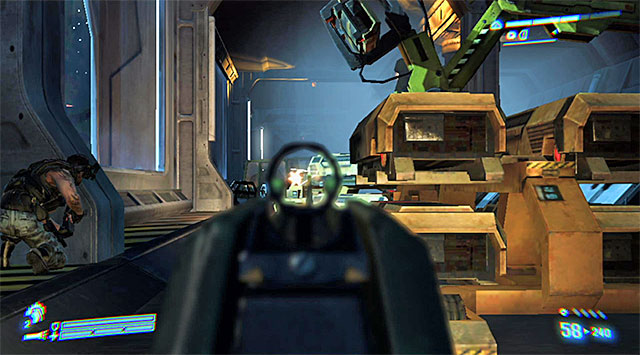 After unlocking the door, head for the stairs leading to the service line and go straight ahead. As you may be guessing, there will some fighting with the Weyland-Yutani mercenaries. I suggest starting off with the grenade launcher or regular grenades; it's the easiest way to get to the covers. Further on, try to move towards the galleries on the right so as to gain height advantage and be able to flank several enemies. 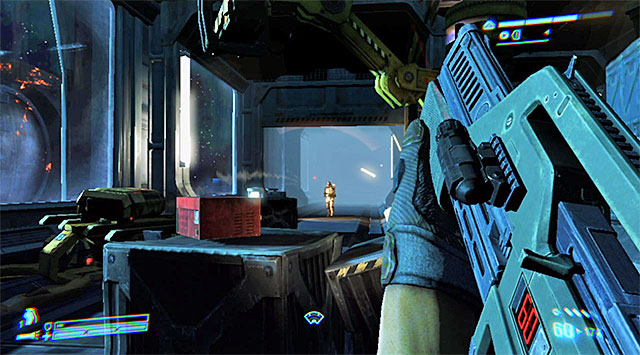 While moving in a straight line, keep an eye for quite numerous collectibles scattered around. Go through the vehicle on the service line and get ready to fight a visibly stronger soldier. Attack him from behind a cover, using explosives when needed to inflict more damage. When you defeat him, he should drop a full armor set. 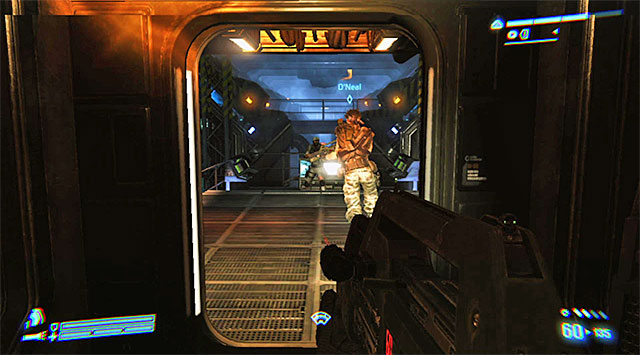 Resume going forward. At the end of the service line, turn right and approach the only interactive door. You'll come across new enemies after entering the larger room (the above screenshot). 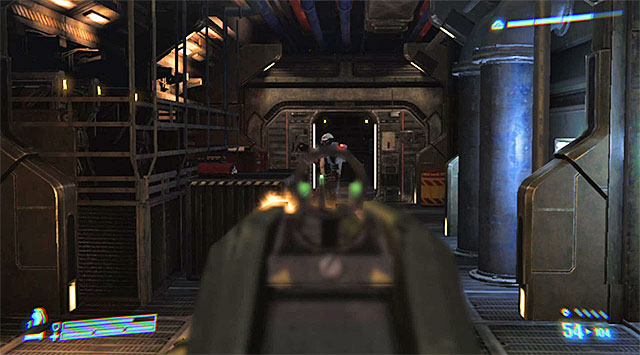 I don't recommend trying to take a stand at the entrance, but rather immediately going left or right. Begin securing the chosen area, all the while counting on your teammates to take care of the rest of the place. While fighting, try to aim at the numerous yellow tanks; even if an explosion doesn't kill a mercenary at once, it will at least set him on fire, making him an easy target. 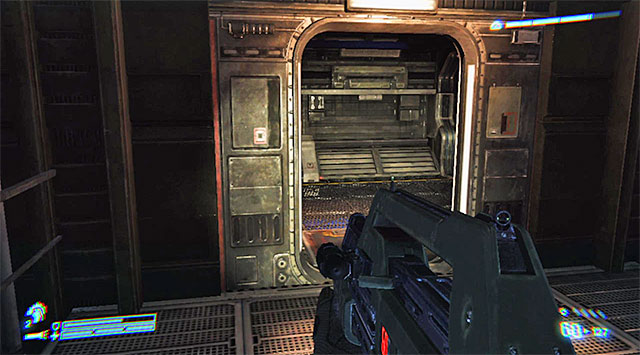 Afterwards, examine the area for collectibles, then move towards the entrance pictured above. After a while you should reach an elevator. Hail it, go inside, and use the control panel. Wait for it to take you to the new level. 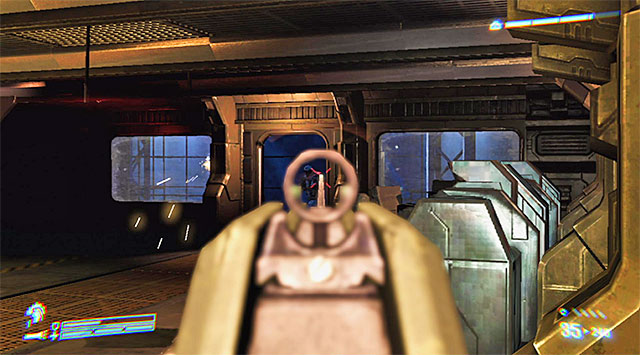 Follow the rest of your teammates. New mercenaries will appear where seen on the screenshot, but be aware that more enemies will show up on the metal galleries outlined in the distance. When you eliminate them, head for those galleries and turn right. 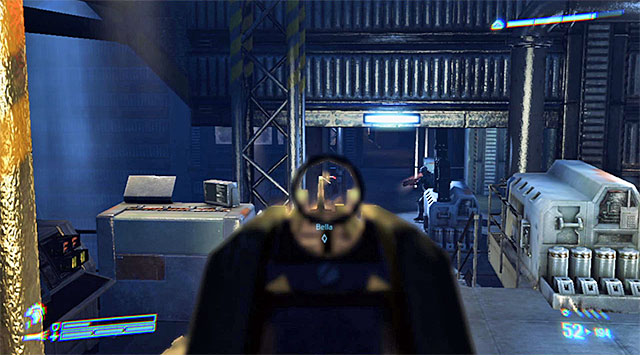 Move forward, but don't hurry; some new soldiers will stand in your way. Crouching works good here, as well the grenade launcher and shooting the tanks. When the area is secured, enter the next section. In one of the nearby room there should be a single soldier to take down. 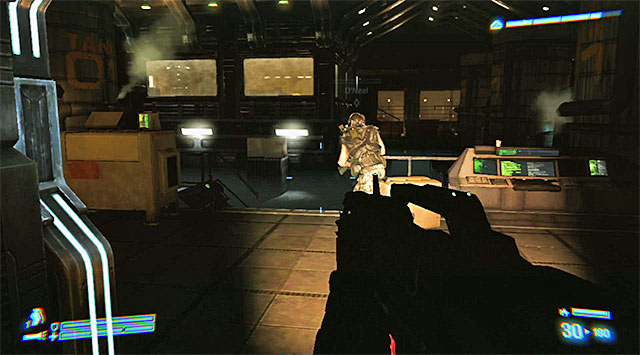 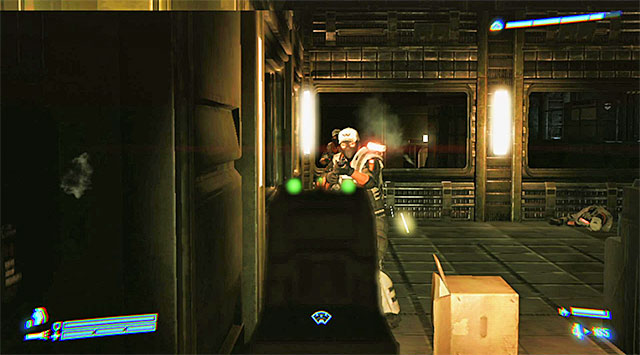 Keep moving forward, one step at a time. Another big battle will take place in the room illustrated on screenshot 1. Watch out especially for the mercenaries that will appear in the upper room on the left. Depending on preferences, you can try to eliminate them from a distance (use covers) or reach the door as quickly as you can to take them out in close combat (screenshot 2). 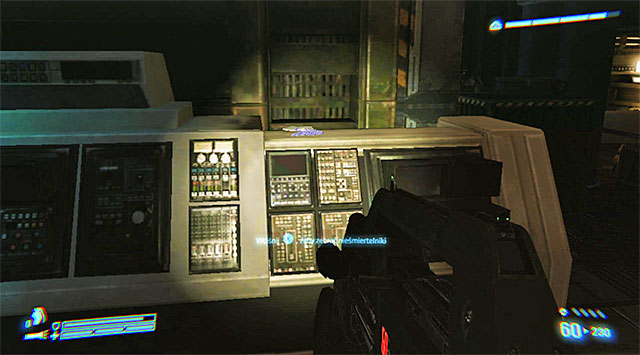 When it's over, examine the area; apart from supplies you'll also find the third Dog Tag (PFC J. Ziglar). Continue the march towards your current destination. 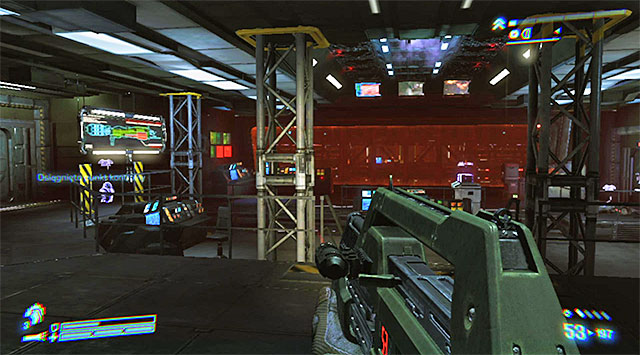 There are three subsequent larger rooms ahead of you, and in each one of them there is an equally large group of hostile mercenaries. Remember to use covers, replenish your supplies and shoot the explosive tanks to your advantage. When you reach the third room (the above screenshot), take notice of the better equipped opponent which will show up in the distance. Shoot him from a solid cover so as not to lose too much energy. 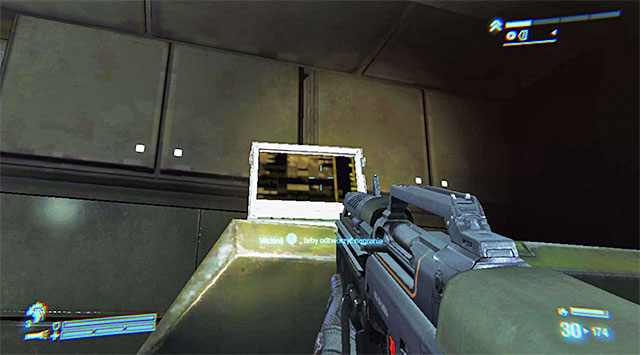 When the last battle is over, examine the room to find an Audio Log where shown above (make sure to stand in a proper spot, it's the only way to render it interactive). 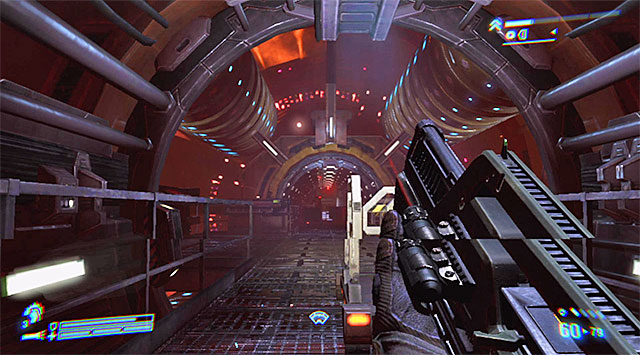 Locate the control panel to unlock the door to the engineering section. There are a few narrow corridors ahead of you. Each of them contains several enemies to defeat, and taking into account the layout of the area, it's best to use grenades or the grenade launcher against them. Your destination is the elevator. Same as before, hail it and use the control panel inside.