On this page you will learn how to start your adventure in Xenoblade 3. Our beginner's guide will introduce you to the game world and your first battles. We explain how to use abilities (Arts) and describe character roles. We cover the different types of enemies, collecting and selling items, and using temporary buffs.

Combat in Xenoblade Chronicles 3 consists of regular auto-attacks and using various abilities (Arts). When the ability is ready for use, its icon lights up. When this happens, press the correct button to trigger it. 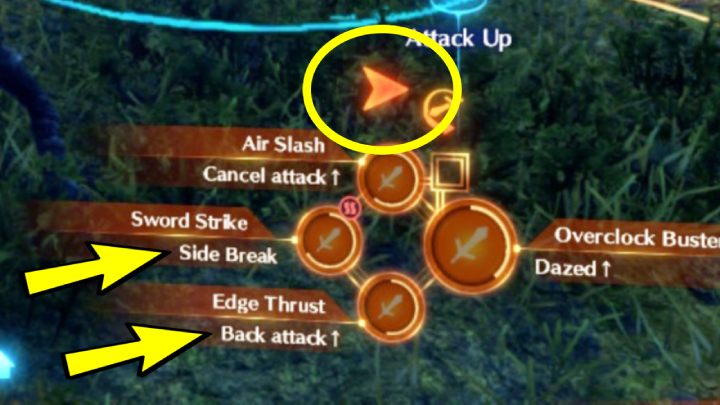 Properly positioning your character while using an ability will cause it to deal more damage. Some abilities have detailed descriptions that suggest which position your character should take while attacking the enemy. The orange arrow shows your current position against the opponent.

As you progress the story, you will unlock new types of skills, such as Master, Fusion and the Ouroboros form.

This game has over 20 character classes. All of the classes belong to 1 of the 3 roles:

Attackers focus on dealing as much damage as possible and they mostly attack the enemy from the side or back.

Defenders try to distract enemies from the rest of the team and they have abilities that increase defence and force opponents to target them.

The healer has the ability to regenerate health, buff attacks and revive fallen comrades.

When you see a red line running from the attacking enemy to one of your characters, then said opponent is either a healer or attacker. In these situations, switch to your defender to tank the enemy attacks. Without a healer, you can lose fights very quickly.

You will unlock the character switch option after completing chapter 1 of the game. 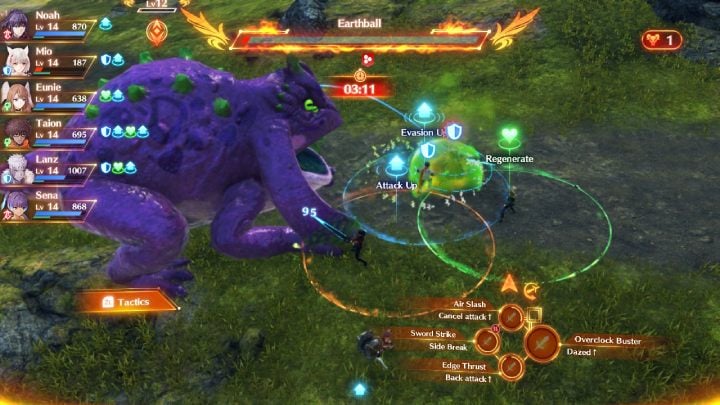 Colored circles on the ground indicate temporary buffs. The orange circle increases attack power, the blue one improves defense, and the green one regenerates health.

When one of your characters activates a buff, enter said field to receive a temporary stat boost. 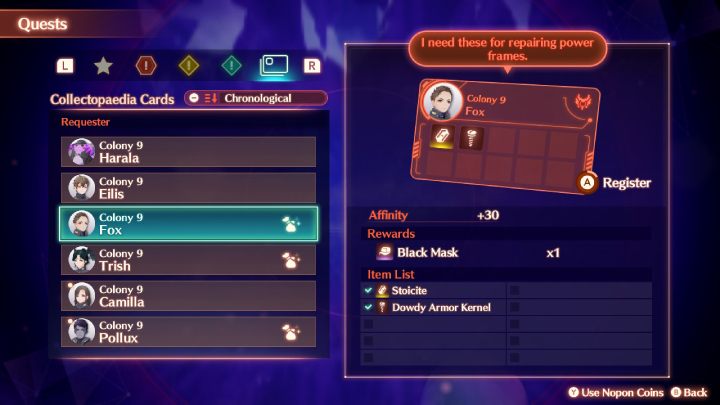 Have you always been annoyed by the amount of unnecessary items in your inventory? Xenoblade 3 has found a quick way to get rid of excess items! You can use the Collectopaedia Cards tab in the Quest menu to send the items you found to different people encountered in the game, who'll give you small rewards in return, such as accessories, stats, experience points, and even Nopon Coins. 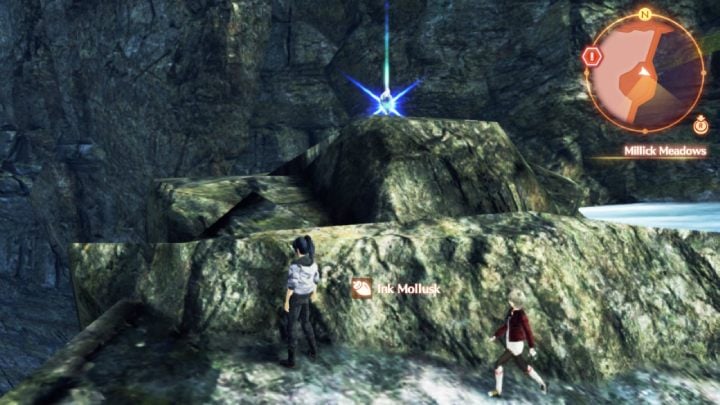 All items meant for selling can be exchanged at the Shillshill merchant. For this reason, make sure to pick up all the objects glowing in the distance and explore the map in search of rare items.

Pay attention to the opponents' type

Monsters and enemies are divided into 4 types. Normal enemies will simply have their level displayed above their heads. If this number is marked in red, your opponent will be too strong for you.

Elite enemies have blue icons next to their level display, while unique enemies have golden ones. These opponents are extremely strong and even if you match their level, fighting them may be too difficult for a beginner, but you'll get tons of experience and interesting items if you manage to overcome them. 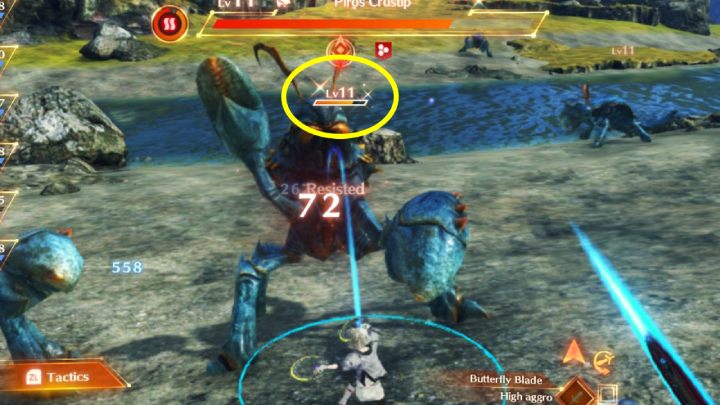 You'll recognize Lucky Monsters by their glowing level display. They aren't much stronger than regular opponents, but killing them will net you better items. At the beginning of the game, you should prioritize killing these enemies to quickly earn gold and get valuable items.

Use the attack canceling mechanic

Canceling attacks is extremely useful against strong enemies. This mechanic lets you charge the Chain Attack meter faster and increases your crit chances. 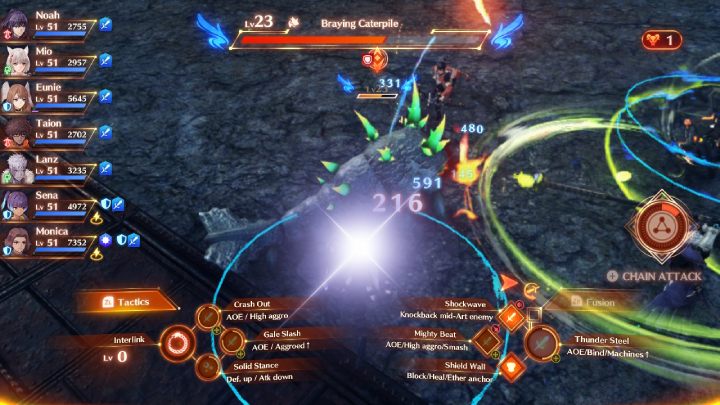 Use an Art the moment you finish attacking to cancel the attack. You'll skip the delay between both attacks and chain them into a combo. A successful attack cancel is indicated by bright light around your character.

Wait for all your Arts to charge and use attack cancelling whenever you have an opportunity.

You can save the game at any time you want. Press X, then Y to make a quick save, then try facing more powerful foes. Succeeding will reward you with a lot of EXP, CP, some good items and Nopon Coins. If you fall in combat, it's no big deal - you'll simply return to the nearest landmark. 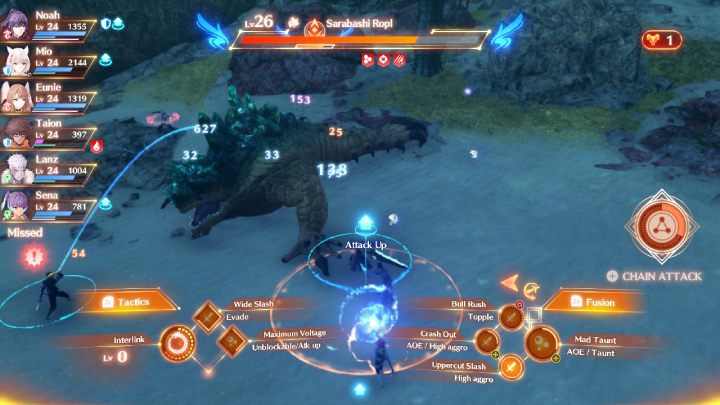 Avoid monsters of a much higher level than you. Not all of them are aggressive, so you can just walk past some of them if you don't strike first.

When encountering a group of stronger enemies, mark one of them with the L or R button, get a bit closer and lure them towards you by pressing the Up button. This should let you beat the group one by one.

Use R3 during difficult fights

If a battle's going south, press R3 and tilt the left analog stick in a desired direction. You'll jump away from the enemy, giving you a moment of respite to heal or change characters.

Zoom in on the mini-map 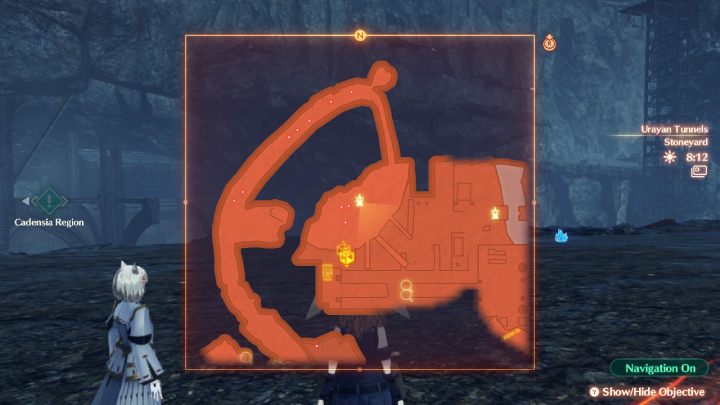 While you're exploring, you can press R3 to zoom in on the mini-map. Do so often, looking out for nearby Containers or question marks, which can indicate new quests, shortcuts or other events.