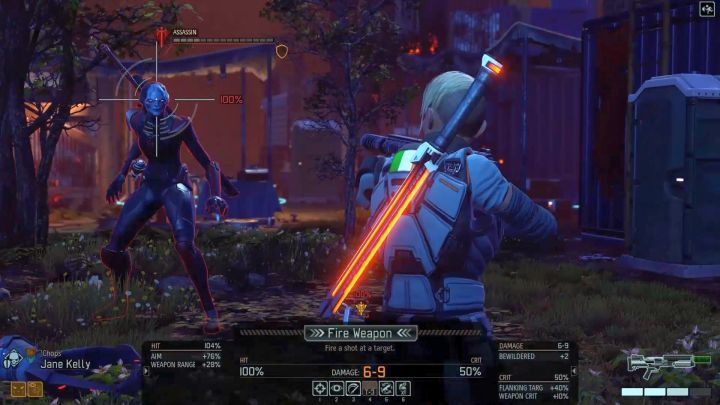 Initially, fighting the chosen isn't particularly difficult, but this will change in due time.

Fighting the Chosen is possibly the greatest challenge the expansion offers (perhaps even the whole XCOM series). There are various reasons for that, the most outstanding one being their sheer power on the battlefield - they deal massive damage, are able to neutralize a few soldiers at once and command powerful psionic abilities that enable them to summon even over a dozen enemies. Another factor is that with each week of game time, they become more powerful; also, you can never be sure whether they'll appear on the battlefield - the only way to be sure of that is if you see one rampaging your troops. As you might remember from the chapter above, there are three Chosen ones: the Assassin, the Hunter and the Warlock.

Available Strengths of the Chosen 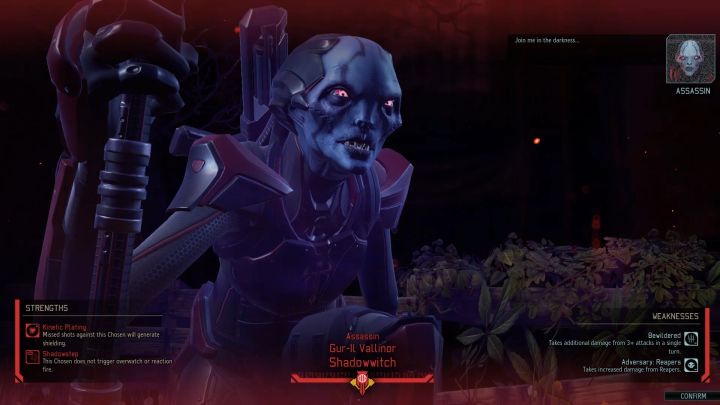 You can peep the Strengths and Weakness of the Chosen during a fight.

Each of them can chose a maximum of five Strengths - the available choices have been listed below. They begin with only two, but in time they will get the remaining three. Remember that some of these are more probable to occur with one of the Chosen, while the others are very unlikely - it all depends on their style.

Available Weaknesses of the Chosen

Every Chosen receives two weaknesses at the beginning of the game, but contrary to the above, the number of weaknesses doesn't increase in time. Below, you can look up the available weaknesses. 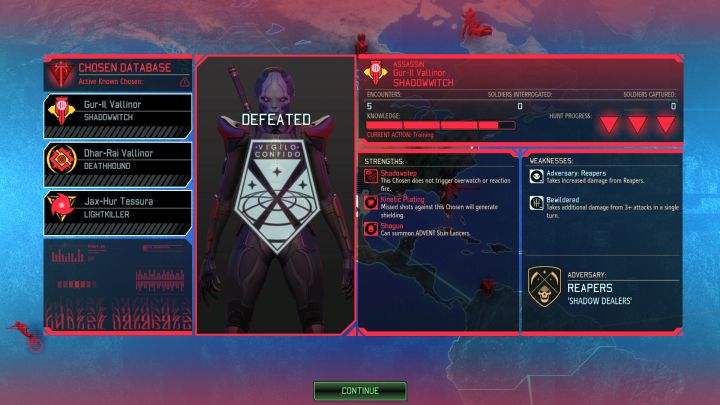 The Assassin is the first Chosen to be encountered in the game. She's particularily dangerous on short distance, and in this respect, she's similar to the Hunter class - she also uses a sword and shotgun combination. She's also moving a lot, which allows her to cover huge portions of the map within a single turn. Here the similarities end, and the differences begin.

The Assassin's camouflage is active during movement - until she disengages it, the player is unable to know where she is (unless you manage to track her; bear with us). She also has the Shadowstep Ability by default, which renders the Vigilance Ability useless. Then, when she approaches a player's soldier, she'll attack with the sword, often stun the soldier, and retreat. This stun is meant to prepare the soldier to be abducted - she can appear next to him, abduct the poor soul and exit the battlefield.

You should keep the following rules in mind when facing the Assassin: 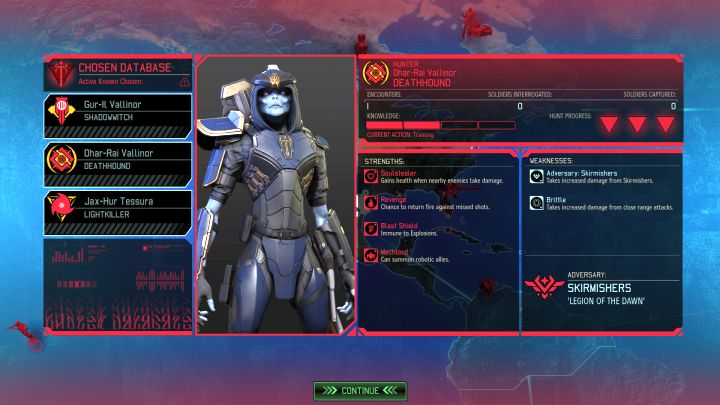 The second of the three Chosen is the Hunter - the counterpart of a sniper. He is, however, much more efficient - his abilities and guns allow him to reach targets on the far end of the map just to fire a shot that has a great possibility if instakill in the next turn. As you can guess, this enemy fights at long distance and uses a hook rope to get around the map levels. All this makes him a formidable enemy, particularly if he's far away, behind a front of his own soldiers.

You should keep the following rules in mind when facing the Hunter: 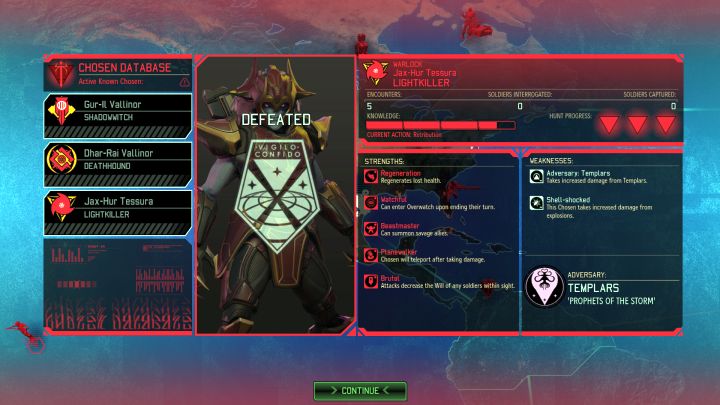 The last member of this dream team is the Warlock. While he has a pretty powerful machine gun, he's real strength lies in the psonic powers. They allow him to summon most of the regular enemies to battle - different versions of the ADVENT, mechs (even Sectopides!) or beasts. Also - as any psonic unit in the game - he's able to take control over a soldier.

He also has two unique abilities. One of them allows him to summon 2 to 5 zombie-ghosts, which appear on the battlefield and approach the player's soldiers. Then they become armed - after one turn, or after getting killed, they explode, damaging nearby units. Oddly enough, the Hunter can use this ability throughout the whole map, even if the alien units have no vision on your soldiers. The other ability is kind of similar, but it summons specters of a couple ADVENT soldiers - they generate a shield for the enemy, which renders him immune to all attacks. The shield only disappears after all phantoms are vanquished.

You should keep the following rules in mind when facing the Warlock: