In the last chapter, you've just learned what are the Ability Points and how to get them. Now you will learn the difference between two kinds of APs and ideas how to use them. The APs in the game are divided between regular AP for soldiers and XCOM AP. The former are APs that are unlocked by regular soldiers by levelling up and completing special actions - they are assigned to an individual soldier and only that soldier can use them. XCOM AP are going into a shared pool - obtained in the same way as the regular APs, these can be used by any soldier. 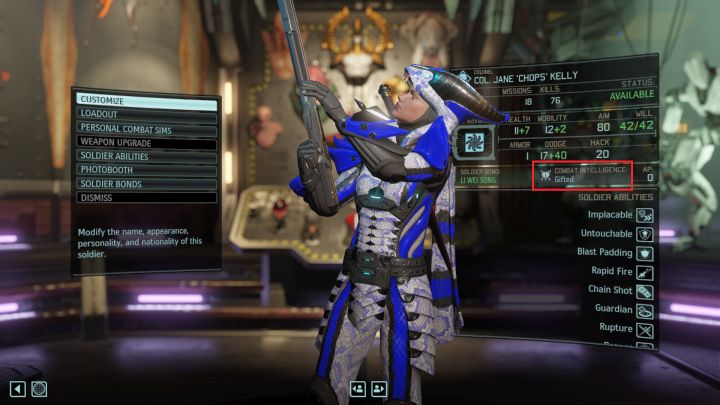 The Combat Intelligence parameter influences the amount of AP you get.

How do you get both of these types? It's rather simple - a soldier has to level up (which grants them personal AP), or complete one of the actions described in the chapter above (for which they get both the regular AP and the XCOM AP). In both cases, the exact amount the soldier gets is dependant on the Combat Intelligence parameter, a new stat that can be looked up on any soldier's card. This parameter can take 5 levels of value:

Each of these is awarded upon the soldier's recruitment / acquisition. What rank do they get depends solely on luck. The chances are as follows:

Obviously, most soldiers lands somewhere between Standard and Above Average, perhaps Gifted. The best is, as you can see, rather rare, so it's possible you won't get even a single soldier like that. Fortunately, there's a way of ameliorating that - some of the Covert Action missions let you change that parameter for soldiers who finish them, so with some patience, you can help the luck.

Another matter that we should get out of our way is the way the APs are awarded for the actions described in the previous chapter. When a soldier completes one of these, the plyer is awarded with an amount of XCOM AP, about which you will be informed by a prompt. Then, a "lottery" takes place, and the soldier gets an amount of personal AP - here, the Combat Intelligence matters a lot again, but it works a bit differently: instead of changing the amount of awarded APs, it changes the chance of getting the AP. The bigger the parameter, the better the chances of the soldier obtaining some AP just for themselves - this doesn't influences the XCOM AP!