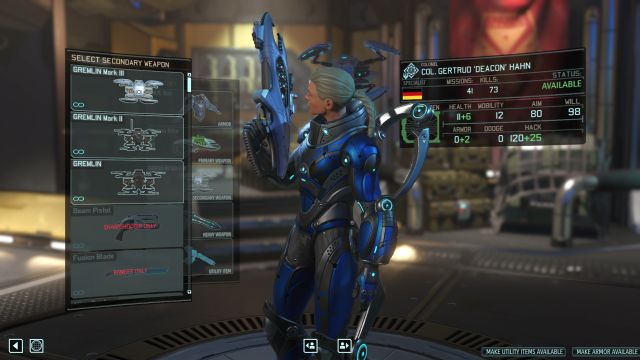 Secondary weapons are used as a complement for the primary ones.

Aside from the primary weapons used by each soldier class, they have access to unique, class-specific secondary weapons as well. They require additional research projects to be finished, often totally unrelated to the ones used to unlock primary weapons, but they are worth the effort - especially in the case of the Specialist, where newer types of GREMLIN increase the HACK attribute of the soldier, the grenade launcher for the Grenadier class, increasing the effectiveness of grenades, as well as the Psi Amp of the Psi Operative, giving a huge boost to their psionic powers.

Secondary weapons aren't necessary to perform well in combat, but you should unlock them whenever you have an opportunity to do so (when you have some free resources and main weapons are already unlocked).

Secondary weapons for classes are as follows:

Swords are unique to the Ranger class, and although they don't inflict enormous amounts of damage they allow the soldier to attack an enemy even when they are behind a solid cover, as swords ignore any form of cover. They won't be able to shred armor, though, making them highly ineffective against heavily armored targets.

Grenade launchers do not offer a direct increase to the amount of damage that grenades inflict, but allow the soldier to launch them at longer distances, increasing their blast radius as well - by selecting appropriate abilities, Grenadiers can turn grenade launchers into weapons of mass destruction, capable of leveling whole buildings and damaging even 4 enemies at the same time.

Psi Amps are used by the Psi Operative-class soldiers and they allow them to use their class-specific abilities. More advanced variants of the item increase the PSI attribute of the soldier, which in turn increases the amount of damage their abilities can do, as well as the chances of inflicting a desired effect (like mind control).

It's the most important item for the Psi Operative, and if you are planning on having more than 1 soldier of that class in your rooster, you should equip them with better versions of the Psi Amps as quickly as possible.

The GREMLIN is one of the biggest novelties in the game. This small drone that is constantly following a Specialist-class soldier increases their hacking abilities and allows them to use most of their class-specific skills. Additionally, thanks to the GREMLIN, soldiers of this class, aside from hacking terminals, can stun, or even assume direct control over mechanized enemies. Finally, thanks to the little drone, Specialists can hack and heal from a distance.

More advanced variants of the drone aren't expensive, which is why you should equip your Specialists with them as quickly as possible - additional 20 or 40 points of HACK is extremely useful for them.

The second installment of the XCOM made pistols a class-specific equipment for Sharpshooters and they perfectly supplement their equipment - given the fact that sniper rifles are highly ineffective at close range, a soldier of this class can at least use a pistol to fend off an enemy.

Even if the first upgrade, the Mag Pistol, does not offer much, the last one, the Beam Pistol, increases the damage output significantly. Together with a number of class-specific abilities, Sharpshooters can turn this weapon into a deadly one.

Note: the ammunition that the Sharpshooter is currently using affect the damage dealt by the pistols as well.