This page of the XCOM Chimera Squad game guide describes a set of useful starting tips related to the City 31 screen, which is the command center of the Chimera Squad players visit in between missions.

If you're looking for general information about the City screen, we recommend navigating to the Headquarters - City 31 section.

Check rewards for all missions that appear on the city map 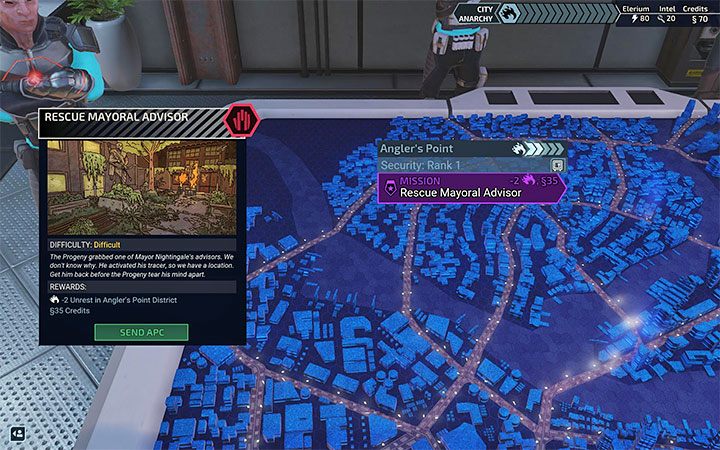 In the vast majority of situations on City 31 map, there are several possible missions to perform and that means you have to choose between them. If you're not in a hurry to complete a major mission, it's worth checking out the rewards for completing a task and choosing which mission is most valuable. Rewards are displayed in the Rewards field below the mission description.

First of all, we advise you to choose missions where one of the Rewards is to reduce Unrest in a particular district. This will make it easier to maintain order in the city and remove the risk of Anarchy increasing over time. It is also worth choosing, for example, missions that offer large quantities of resources you are currently running out of.

Fight to lower unrest levels in a given district 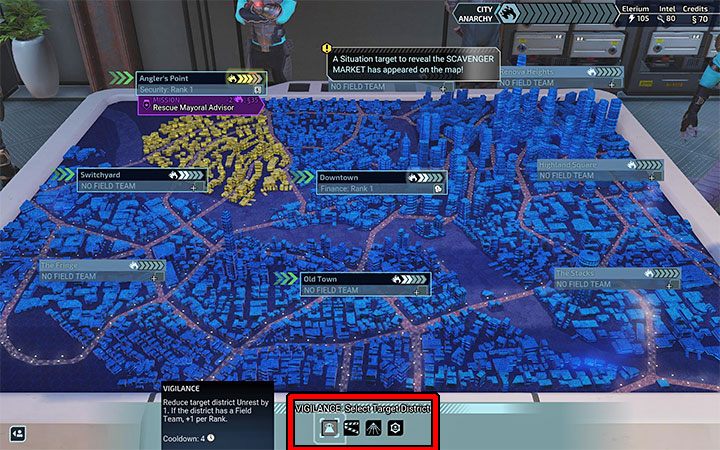 Each district of City 31 has its own Unrest bar, which has 5 points. The maximum level of unrest in the district leads to an increase in the level of anarchy in the city - each day of 5/5 anxiety is equivalent to adding 1 point to the anarchy bar. For the record, 100 per cent of the Anarchy bar means losing the campaign.

Try to respond to increasing Unrest in advance - perform missions to lower unrest and use special abilities of Field Teams. In particular, take an interest in the skills of Vigilance (lowering unrest in a chosen District of a city) and Quarantine ("freezing" the current state of anxiety in a given district). 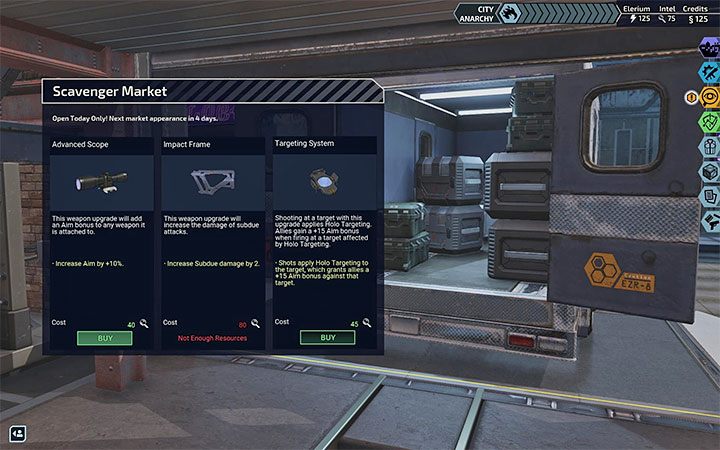 Since the Scavenger Market situation, it may appear once every few days on the city screen. The goods sold at the market are very valuable, but also expensive - you have to sacrifice dozens of intelligence points for each one.

The goods displayed on the market are random and you can never be sure if there is anything particularly interesting to buy. We recommend always keeping at least 50-80 intelligence in stock, so you will reduce the risk that you will not be able to purchase a particularly useful item. 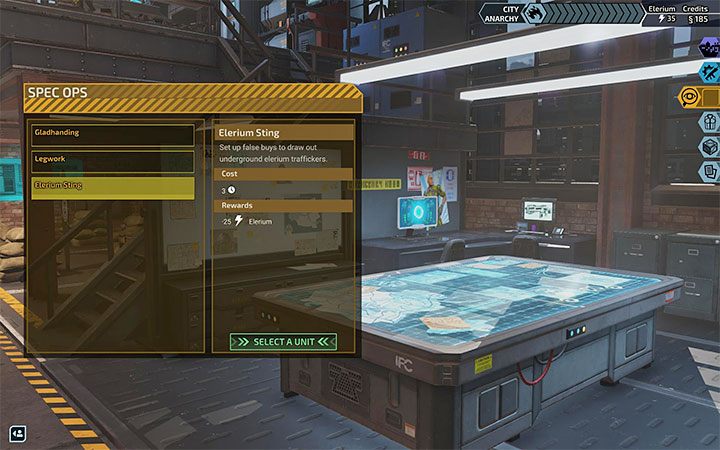 Four team members are required to complete each mission. Avoid situations where other agents remain idle, as it will simply be a waste of human resources. Try to make sure they attend trainings every day, too. You can send your subordinates to three main types of work: 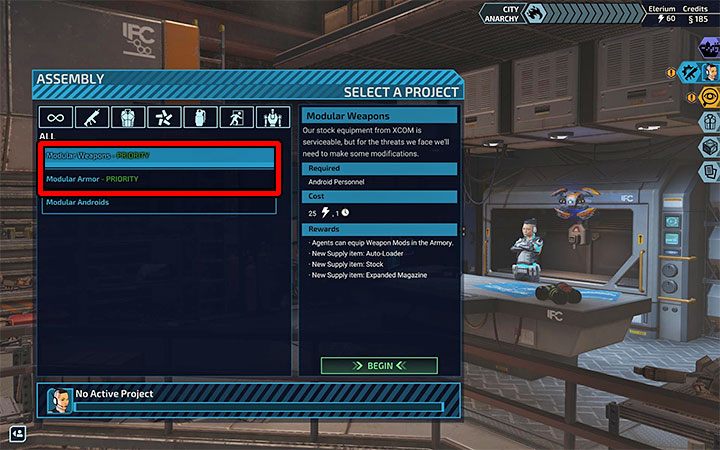 Search the list of research projects in the Assembly tab for those that have a green priority signature. They allow the most important progress to be made. In this way, you can unlock, for example, very important weapons, useful gadgets, or new options to select on the tactical screen.

Some of the priority researches require you to spend a lot of elerium (don't spend it on less important researches) and wait a few days. In the latter case, remember that sending one of the agents to research can reduce the time to finish a project by 50%. 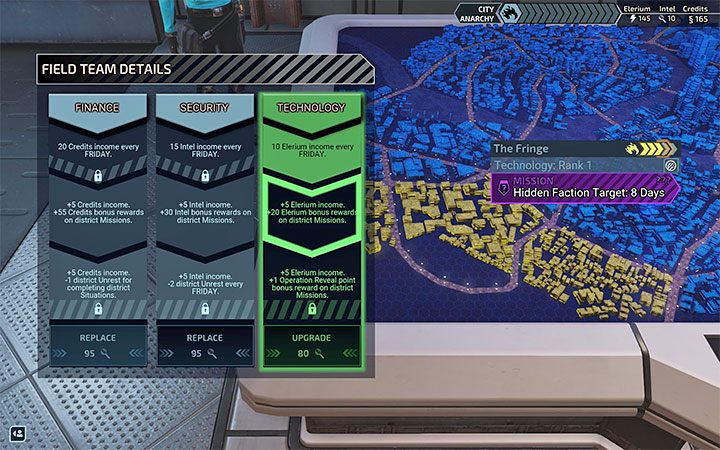 A Field team can be assigned to each of the 9 City districts. Try to do this in all districts as early as possible, as this will unlock a special Major Crimes Task Force to reduce the level of Anarchy throughout the city. When recruiting more Field teams, pay attention to two other issues:

You always have to figure out a faction before you can focus on the next one. 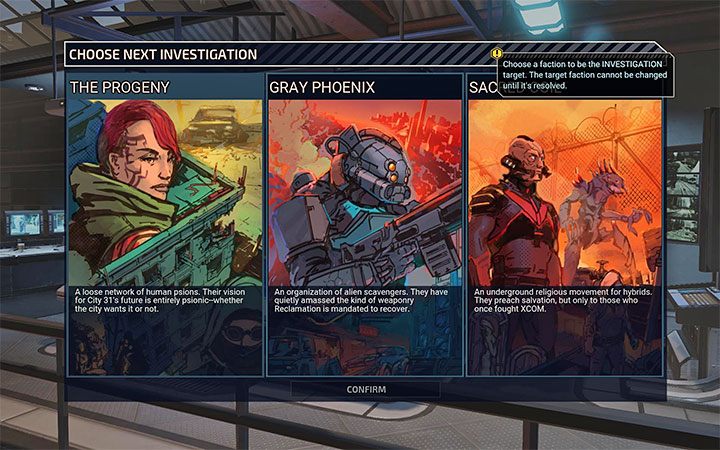 Soon after the campaign begins, you will be faced with a choice as to which hostile faction the Chimera Branch should begin to fight. After selecting 1 of the 3 factions, an investigation will begin and subsequent missions will also be associated with this faction.

Don't waste your time trying to find signs of the other factions. You won't be able to deal with them until you've completed your investigation on the group you've chosen before - the Chimera Squad will have to identify the leader of the hostile faction and stop him. Once the investigation is complete, you will see a window with a list of factions again and you will be able to choose one of the previously omitted groups.