The game guide to the World of Warcraft Battle for Azeroth is a handy set of practical advice and guidelines that will help you in getting answers to the most important questions about the new expansion. Battle for Azeroth is the latest expansion set to the much-loved MMO game. Since its launch the game has collected great reviews and everything indicates that Blizzard has delivered another exquisite in-game content for months to come.

What can you find in our WoW guide? We decided to approach the matter a little differently than usual and instead of preparing a comprehensive guide we focused on major features and key information, tips, and instructions, which may be useful during leveling up and raids. Therefore, instead of providing a detailed walkthrough, we've included answers to important questions, such as how to unlock a mount, how to reach new locations or, most importantly, which allied race you should choose at the beginning? In other words, in following chapters and section you can find everything that will be useful for a beginner player during his adventure with WoW's new expansion.

Where is Thrall in the lore of Battle for Azeroth?

Where is Thrall in Battle for Azeroth? Thrall, a legendary figure, an orc who saved his race and largely shaped today's Horde, returns in Battle for Azeroth. However, the question is: where is Thrall? This matter is not so obvious, because after abandoning the title of Warchief Commander of the Horde, Thrall has appeared rather rarely. He usually returned in the most important moments of Azeroth's history. So we answer your question - Where is Thrall and what is he doing in the current timing in World of Warcraft?

System Requirements of Battle for Azeroth

Despite the fact that World of Warcraft still relies on the old 14-year-old game engine, the game can cause some frame rate drops even on newer hardware equipment. So we've decided to devote a lot of time and space to answer such questions like: How to set up the graphical options? What should I do to make sure that WoW runs smoothly? WoW's hardware requirements have evolved over the years due to graphical improvements, so find out if your computer can handle the highest graphics settings of the game.

Beginning in Silithus and A Dying World quest

It can be quite difficult to begin the new WoW expansion. There's a long, even huge adventure ahead of you, 10 levels to reach (up to 120 levels) and hundreds of new quests. The question about how to get to Silithus is actually how to start the expansion of Battle for Azeroth. We present few ways to get to Silithus from both sides - The Horde and The Alliance. You will learn how to get the Hearth of Azeroth necklace and what conditions you have to meet in order to unlock your quest.

Allied Races in WoW - which you should choose?

Before Battle for Azeroth, WoW had a lot of races to choose from, but the latest addition will allow you to embody as many as 8 new races. The so-called Allied Races are new factions that will join both The Horde and The Alliance. In this guide we advise you which allied race to choose and how to unlock it.

About World of Warcraft Battle for Azeroth Game Guide 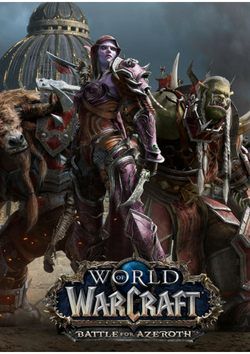 World of Warcraft: Battle for Azeroth for PC is the seventh expansion for the classic 2004 MMORPG World of Warcraft. The expansion was announced during BlizzCon 2017 and it was developed, as usual, by American studio Blizzard Entertainment.

World of Warcraft: Battle for Azeroth focuses on the rivalry between the two most important factions of Azeroth, the Alliance and the Horde. The expansion adds two new continents (Zandalar and Kul TIras), divided into islands, where you can find new dungeons and raids, quests and previously unseen enemies, as well as six new playable races. Once again, the maximum experience level of the player characters increases (from 110 to 120). Battle for Azeroth also introduces two new game modes. In the first one, groups of three characters explore chosen maps and fight randomly assigned monsters and threats. In the other mode, groups of twenty characters each try to take over locations in strategic places for their factions.

More About World of Warcraft: Battle for Azeroth

15 years and seven expansions later, World of Warcraft is still alive and kicking, but it's not the same game we knew. Today, it looks like a giant on legs of clay, and Battle for Azeroth proves that something's wrong at Blizzard.