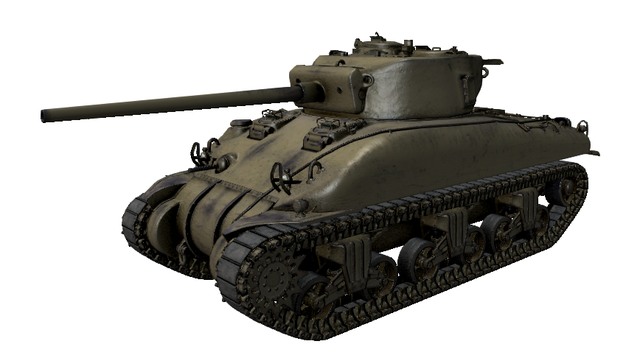 In reality M4 Sherman was one of the most popular tanks on World War II frontlines. Because of its versality it was the mostly produced and modified tank of the west block. But it wasn't a good tank. Game developers probably wanted to compensate its war experience and in the game it is a very good tank, which gathers his strength from a great, big caliber gun. It's a great medium tank, especially if you play against the same tier tanks. Sadly, the system can throw you even against tier VII. M4 Sherman has pretty decent armor. Although it has only 51mm thickness it is well angled and with right position it can bounce off some bullets. But its not the armor that is the main advantage if this tank. It's his mobility and the 105mm gun, that deals 410 damage. It's a massive amount of damage for tier V, and when shooting with high-explosive ammunition you will deal damage even to well armored enemy vehicles. On the battlefield this tanks role is to support heavy tanks and destroy less armored enemy tanks.

First, most important thing is to develop 105mm cannon. It is not the best cannon dedicated for this vehicle, but it works best with him, Next, you should upgrade its mobility, so develop suspension and engine. At the end develop level VI cannon, which will be useful in the next vehicle, Sherman Jumbo. 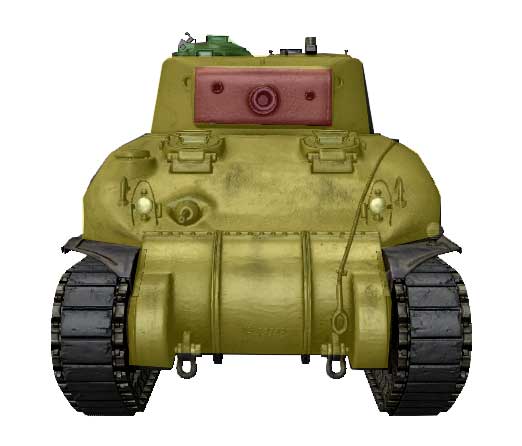 The hull of M4 Sherman is quite well angled, but not too thick, so if you know where to shoot you shouldn't have trouble with penetrating it. The whole front plate has 51mm thickness and the least angle can be found in the middle of the armor Try to aim at the right of the machine gun socket or at the plate below it. Avoid the bottom of the vehicle. The armor has real thickness of about 100mm there. You can try to shoot at the whole front plate, but there is a possibility that the bullet will bounce off.

The turret is similarly easy to pierce. Shoot mostly at the commander hatch. If you have an accurate cannon you can shot at the gun mantlet as well, although only at the central part of it, where armor thickness is 90 mm. Avoid shooting at other parts of the turret, which are well angled.

When playing as Sherman you should keep as close to the frontline as possible. Your gun is useful only on the smallest distance. But staying at the frontline doesn't mean a frontal assault. You have only 400 hit points, which isn't much. You should stay behind cover, riding out only to shoot.

Avoid direct confrontation with enemy. Don't ride at him, unless it's a light tank or badly armored tank destroyer that you can destroy with only one shit.

Utilize mobility of your tank, especially on city maps, where you will be able to flank your enemy.

Aim at weaker armored parts of enemy vehicle, if possible at his sides or back. Damage depends on the thickness of armor at the point where bullet hit.

Avoid shooting at enemy that is well angled, thanks to that virtually every shot should penetrate enemy armor.

If you play with a less armored vehicle avoid Sherman at all cost. Quickly retreat behind better armored allied tanks.

If you play with a tank that has good front armor you can try an frontal assault and direct shooting. In close distance and as long as you don't show your side to the enemy you shouldn't have trouble with finishing him off.

Otherwise try to keep enemy at distance. The longer the distance, the less effective his gun is.